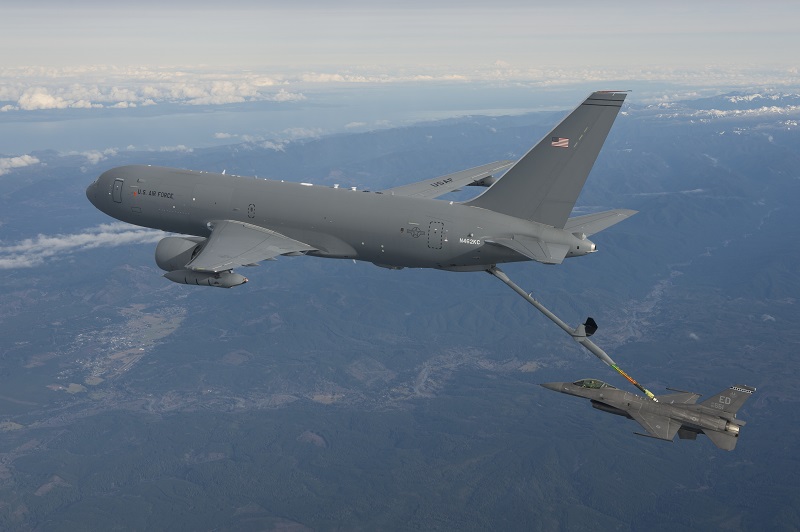 The Boeing KC-46A tanker refueled an F-16 aircraft as part of its first refueling in flight on Jan. 25. Image credit: Paul Weatherman, Boeing

Master Sgt Lindsay Moon, U.S. Air Force KC-46 air refueling operator, performed the initial maneuver, flying to meet the F-16 and operating the boom. In total, the flight lasted five hours and 43 minutes, during which the test team brought the aircraft through a series of test points and then delivered 1,600 pounds of fuel to the F-16.

“The refueling boom’s handling qualities throughout the flight were exceptional,” said Rickey Kahler, a Boeing KC-46 air refueling operator who also guided the boom. He performed the maneuver from the tanker’s refueling operator station, situated in the front of the aircraft. “The boom was extremely stable – it handled like it was an extension of my arm.”

The test flight is the first step in the refueling demonstration milestone process, which will culminate in the Air Force’s initial production decision.

“We have a lot of work yet to do, but this is an exciting time for the airmen who are preparing to fly, maintain and support the KC-46 Pegasus for decades to come,” said Col. Christopher Coombs, U.S. Air Force KC-46 system program manager.

Boeing is building four aircraft in total for the tests, two of which are configured as KC-46A tankers and two as 767-2C tankers. The Air Force plans to receive 179 KC-46 aircraft in total.