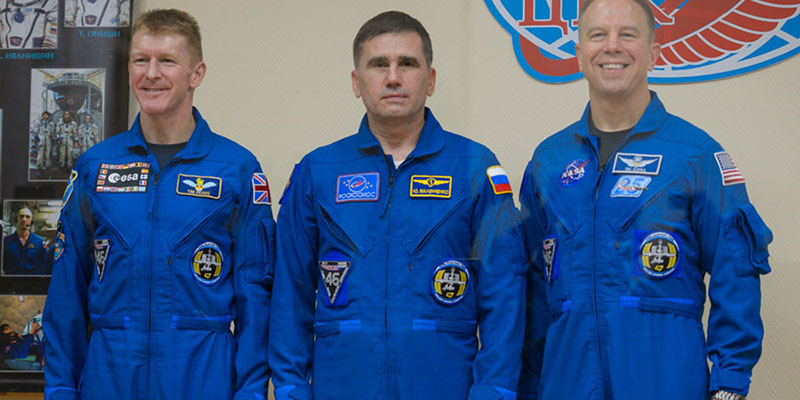 The three Expedition 46 crew members on board the International Space Station have a light duty day today before they welcome a new trio to the station on Tuesday.

Commander Scott Kelly enjoyed a day off while cosmonauts Mikhail Kornienko and Sergey Volkov spent some time on microgravity science and vision checks.

Back on the ground in Kazakhstan, a new Soyuz rocket stands at its launch pad at the Baikonur Cosmodrome after being rolled out Sunday morning.

Veteran cosmonaut Yuri Malenchenko will command the Soyuz vehicle alongside NASA astronaut Tim Kopra and British astronaut Tim Peake. The crew will be living and working in space for the next six months on advanced science benefitting life on Earth and future crews in space.

Malenchenko is the most experienced member of this trio with 641 days in space. He is embarking on his fourth space station mission. He also lived on Russia’s last space station Mir and flew aboard space shuttle Atlantis.

This will be Kopra’s second station residency, having spent 58 days in space as an Expedition 20 Flight Engineer. Peake will be Britain’s first astronaut to go to the International Space Station and this will be his first mission.