If you’re chasing the elusive goal of nuclear fusion and think you need a bigger reactor to do the job, you first might want to know precisely how much input energy emerging from the wall plug is making it to the heart of your machine.

If somewhere during that journey you could reduce internal losses, you might not need a machine as big as you thought.

To better determine energy leaks at Sandia’s powerful Z machine — where remarkable gains in fusion outputs have occurred over the last two and a half decades, including a tripling of output in 2018 — a joint team from Sandia and Lawrence Livermore national laboratories have installed an upgraded laser diagnostic system.

The quest to accurately understand how much power makes it into Z’s fusion reaction has become more pressing as Z moves into producing the huge number of neutrons that now are only a factor of 40 below the milestone where energy output equals energy input, a desirable state known as scientific break-even. The Z machine’s exceptionally large currents — about 26 megamperes — directly compress fusion fuel to the extreme conditions needed for fusion reactions to occur.

Laboratory fusion reactions — the joining of the nuclei of atoms — have both civilian and military purposes. Data used in supercomputer simulations offer information about nuclear weapons without underground tests, an environmental, financial and political plus. The more powerful the reaction, the better the data.

And, over the longer term, the vision of achieving an extraordinarily high-yield, stable and relatively clean energy source is the ambition of many researchers in the fusion field.

A little help from our lasers

The laser diagnostic system that Sandia developed to help achieve these improvements was originally called VISAR, for Velocity Interferometer System for Any Reflector. VISAR takes information about available power gathered from an area the size of a pencil point.

The new system, called Line VISAR, was developed later at Lawrence Livermore. It analyzes information gleaned within the larger scope made available through a line, instead of a point, source.

Both innovations bounce a laser beam off a moving target at the center of Z. But there’s a big difference between the two techniques.

VISAR uses a fiber cable to send a laser pulse from a stable outside location to the center of the machine. There, the pulse is reflected from a point on a piece of metal about the size of a dime called a flyer plate. The flyer plate, acting like a mirror, bounces the laser signal back along the cable. But because the flyer plate is propelled forward by Z’s huge electromagnetic pulse by a distance of roughly a millimeter in a few hundred nanoseconds, the returning pulse is slightly out of phase with the input version.

Measuring the phase difference between the two waves determines the velocity achieved by the flyer plate in that period. That velocity, combined mathematically with the mass of the flyer plate, is then used to estimate how much energy has driven the plate. Because the plate sits at the heart of the machine, this figure is nearly identical to the energy causing fusion reactions at the center of the machine. This observation was the objective of VISAR.

But the point target could not account for distortions in the flyer plate itself caused by the enormous pressures created by the electromagnetic field driving its motion.

Lawrence Livermore’s improvement to the device, now installed at Z, was to send a laser beam along an optical beam path instead of a fiber cable. Passing through lenses and bouncing off mirrors, Line VISAR returns a visual picture of the pulse hitting the entire flyer plate, rather than returning a single electrical signal from a single point on the flyer plate.

Researchers study the contrast between the phase-changed Line VISAR picture and an unchanged reference picture and then sliced along a line so that an ultra-high-speed movie with a reduced but workable amount of data can be recorded. By analyzing the movie, which shows the expansion and deformation of the flyer plate along the line, researchers uncover a truer picture of the amount of energy available at the heart of the machine.

“Because you have spatial resolution, it tells you more precisely where current loss occurs,” said Clayton Myers, who’s in charge of experiments at Z using Line VISAR.

Sandia and Lawrence Livermore technicians modified the Line VISAR to work at Z, where everything busily happens at the heart of a machine that shakes coffee cups in buildings several hundred feet away when it fires, compared with the relative calm of the firings at the National Ignition Facility at Lawrence Livermore, where banks of lasers sit removed from the otherwise tranquil sphere in which firings take place.

“The Sandia team was tasked with integrating the various Line VISAR components into the existing infrastructure of the Z machine,” Myers said. “This meant, among other things, engineering a 50-meter beam transport system that provided a buffer between the instrument and its Z target.”

Nevertheless, the last optic of Line VISAR at Z must be replaced for every shot because it faces near-instant destruction from the energy delivered as Z fires.

How does the new detection system work?

“Wonderfully,” said Myers. “I can hardly believe the precision of the data we’re getting.” 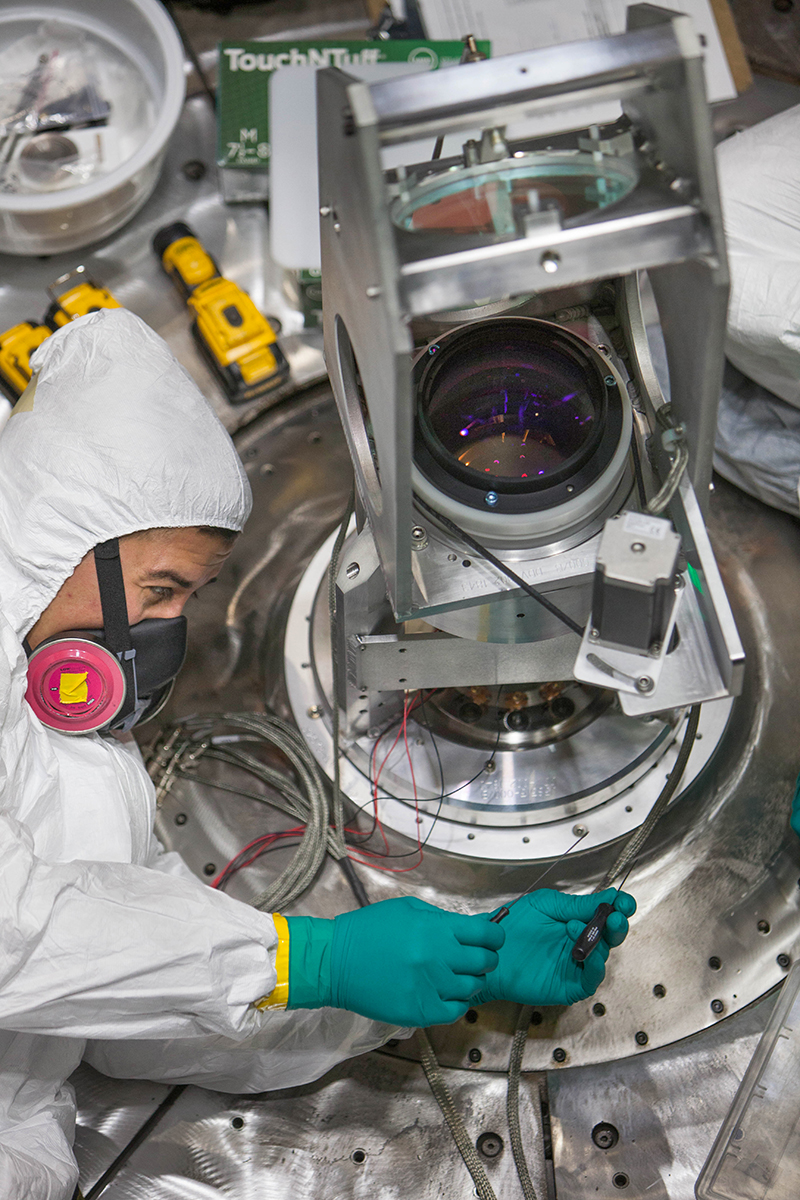 Sandia National Laboratories mechanical technologist Kenny Velasquez makes adjustments during the final installation of the hardware inside the chamber of the Z Line VISAR in preparation for the commissioning shot at Z machine in December 2018. (Photo by Michael Jones)