W. L. Gore & Associates has expanded its line of GORE™ SKYFLEX™ Aerospace Materials for sealing applications with the addition of low-tack adhesives to facilitate easier readjustment of sealants in difficult, complex structures during installation. Shortly after installation, the adhesive strengthens so the sealants withstand mechanical stress and maintain their protective performance for multiple open/close cycles during production and maintenance. 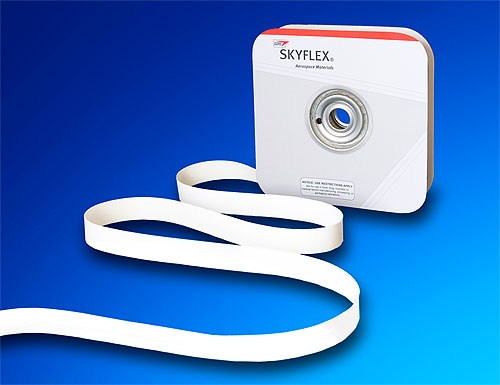 Unlike traditional sealants that can become brittle and crack when exposed to liquids, Gore’s new low-tack sealants provide a barrier against fluids, protecting against corrosion caused by exposure to moisture and liquids such as water, solvents, and de-icing fluids. Under compression, these lightweight, durable materials maintain consistent seals that are resistant to cut-through and abrasion, further extending their useful life.

According to Andreas Eckert, global product manager of GORE™ SKYFLEX™ Aerospace Materials for sealing applications, the new low-tack adhesive used in these sealants was engineered specifically for structures requiring thin sealants and those with complex shapes.

With decades of successful offerings in the civil and military aerospace industries, we understand the importance of reliability and aircraft availability. This new adhesive has an initial low-tack when first applied, so it is easier to adjust and reapply the sealants when working with complex surfaces. After only a few hours, the adhesive strengthens to provide the same level of durable, long-lasting protection as our other adhesives. Like all GORE™ SKYFLEX™ Aerospace Materials, this new low-tack sealant does not require curing, so aircraft availability is significantly increased.