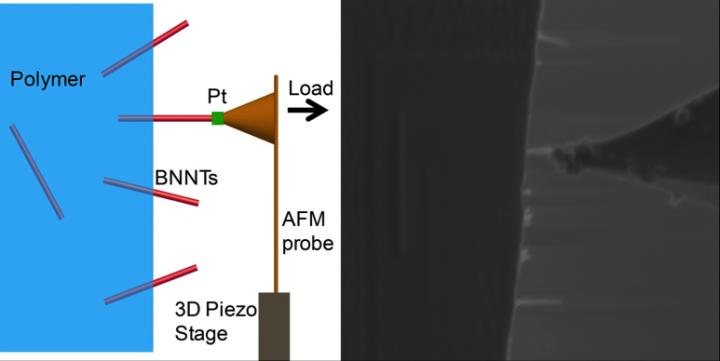 Thousands bound together are still thinner than a single strand of human hair, but with research from Binghamton University, boron nitride nanotubes may help build better fighter planes and space shuttles.

A team of scientists led by Changhong Ke, associate professor of mechanical engineering at Binghamton University’s Thomas J. Watson School of Engineering and Applied Science, and researcher Xiaoming Chen were the first to determine the interface strength between boron nitride nanotubes (BNNTs) and epoxy and other polymers.

“We think that this could be the first step in a process that changes the way we design and make materials that affect the future of travel on this planet and exploration of other worlds beyond our own,” said Ke. “Those materials may be way off still, but someone needed to take the first step, and we have.”

Ke’s group found that BNNTs in polymethyl metacrylate (PMMA) form much stronger interfaces than comparable carbon tubes with the same polymer. Furthermore, BNNT-epoxy interfaces are even stronger. A stronger interface means that a larger load can be transferred from the polymer to nanotubes, a critical characteristic for superior mechanical performance of composite materials. Future airplane wings and spacecraft hulls built of those BNNT composite materials could be lighter and more fuel efficient, while maintaining the strength needed to withstand the rigors of flight.

Since nanotube wall thickness and diameters are measured in billionths of a meter, Ke and Chen extracted single BNNTs from a piece of epoxy and then repeated the process with PMMA inside an electron microscope. Their conclusions were based on the amount of force needed to do the extractions. This was the first time that BNNTs –more chemically and thermally stable than the more common carbon nanotubes (CNTs) –were in this kind of experiment. BNNTs can shield space radiation better than CNTs, which would make them an ideal building material for spacecraft.

“They are both light and strong,” Ke said of the two kinds of tubes. “They have similar mechanical properties, but different electrical properties. Those differences help to add strength to the BNNT interfaces with the polymers.”

Metaphorically, think of the epoxy or other polymer materials with the BNNT nanotubes inside like a piece of reinforced concrete. That concrete gets much of its strength from the makeup of the steel rebar and cement; the dispersion of rebar within the cement; the alignment of rebar within the cement; and “stickiness” of the connection between the rebar and the surrounding cement. The scientists essentially measured the “stickiness” of a single nanotube ‘rebar’ — helped by molecular and electrostatic interactions — by removing it from polymer “cement.”

The work was funded by the US Air Force Office of Scientific Research – Low Density Materials program, with materials provided by NASA. Co-authors Xianqiao Wang and graduate student Liuyang Zhang from the University of Georgia provided verification and explanation data through computational simulations after the experiments were conducted in Binghamton.

Catharine Fay from the NASA Langley Research Center and Cheol Park of the Center and the University of Virginia are co-authors on the paper.

In September, Ke and his collaborators received three years of additional funding totaling $815,000 from the Air Force to continue research.

The paper, “Mechanical Strength of Boron Nitride Nanotube-Polymer Interfaces,” was published in the latest issue of Applied Physics Letters.