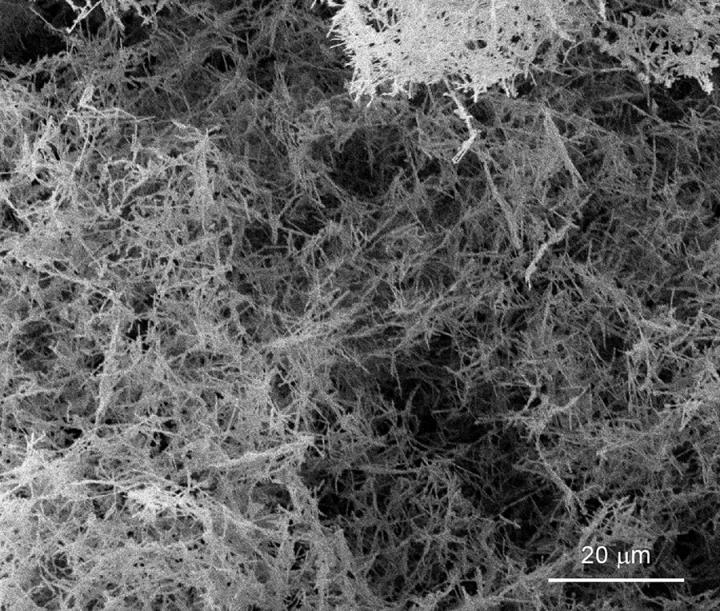 A nanofoam is what it sounds like — a foamy version of some material, filled with very small pores. First introduced about 20 years ago, metallic nanofoams have potential for diverse applications. The porous structures are strong and lightweight — like their natural counterparts of bone and cork. Palladium and certain other metal nanofoams can also rapidly store and release hydrogen, making them an ideal candidate for hydrogen fuel cells.

But before cars can start fueling up via nanofoam, using metallic foams on an industrial scale must overcome challenges including demanding manufacturing conditions, contamination and poor crystallinity, said senior author Kai Liu, professor of physics in the UC Davis College of Letters and Science. It is also difficult to achieve extremely lightweight foams without compromising their stability, Liu noted.

Traditional metallic foam manufacturing techniques may require high temperature, high pressure and controlled chemical environments. The UC Davis-led team instead relies on a wet chemistry approach that is well-suited for industrial applications and adaptable to other types of lightweight metal foams as well, Liu said.

“This opens up a whole new platform for exciting materials explorations,” he said.

The new technique uses nanowires of palladium as building blocks. The nanowires are put in water, then mixed into a slurry with ultrasonic vibrations. The slurry is quickly immersed in liquid nitrogen to freeze the wires in place. Finally, the ice-nanowire mix is placed in a vacuum until the ice vaporizes, leaving behind a pure palladium nanowire foam. The density of the material is as low as one-thousandth of the density of palladium in it’s bulk metal form and can be tuned for different applications, the team found.

The researchers also studied the hydrogen storage properties of the palladium nanofoam, finding the material demonstrated excellent loading capacity and rate of absorption. The nanofoam exhibits excellent thermodynamic stability, as measured by specialized calorimetric techniques at the UC Davis Peter A. Rock Thermochemistry Laboratory. The laboratory is led by study co-author Alexandra Navrotsky, who holds the Edward Roessler Chair in Mathematical and Physical Science.

The results were published online Oct. 20, 2017, in the journal Chemistry of Materials. Additional co-authors include Dustin A. Gilbert, Edward C. Burks, Sergey V. Ushakov, Patricia Abellan, Ilke Arslan and Thomas E. Felter. The study was sponsored by the Department of Defense’s Defense Threat Reduction Agency, the National Science Foundation, the Department of Energy and the Tom and Ginny Cahill Fund for Environmental Physics.