Researchers have created a new type of non-liquid lubricant that has been shown to reduce friction and wear significantly under the extreme conditions found in various applications, from air compressors to missile systems.

The new liquid-free composite is made from a slurry of a material called graphene, zinc oxide, and the polymer polyvinylidene difluoride. Graphene is an extremely thin layer of carbon that has many potential technological applications, including lubrication.

The nanosize zinc-oxide particles the team developed allow the lubricant to stick to the metal surface, and the polymer binds the whole mixture together, said chemical engineering graduate student Arthur Dysart.

“The fundamental causes of mechanical failure are friction and wear, so reducing these factors improves the performance and lifetime of many mechanical systems,” said Farshid Sadeghi, Purdue’s Cummins Distinguished Professor of Mechanical Engineering. “Despite recent advances, liquid lubricants cannot be used in situations of high temperature or low pressure such as a vacuum environment, so dry solid-state lubricants are a viable alternative to their liquid counterparts in extreme operating environments.”

Findings were detailed in a research paper published on July 11 in the in the journal Carbon.

“The durability and resilience of this adhesive coating suggest exceptional potential as a dry lubricant for high load-bearing applications,” Pol said.

The researchers found that the composite lubricant sets up a film that significantly improves friction and wear reduction. Raman spectroscopic analysis of wear scars revealed this persistent protective film on contact surfaces. 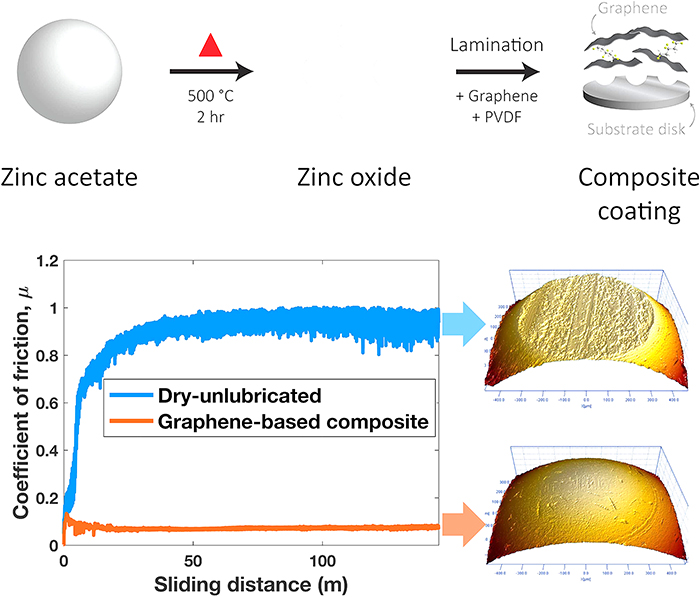