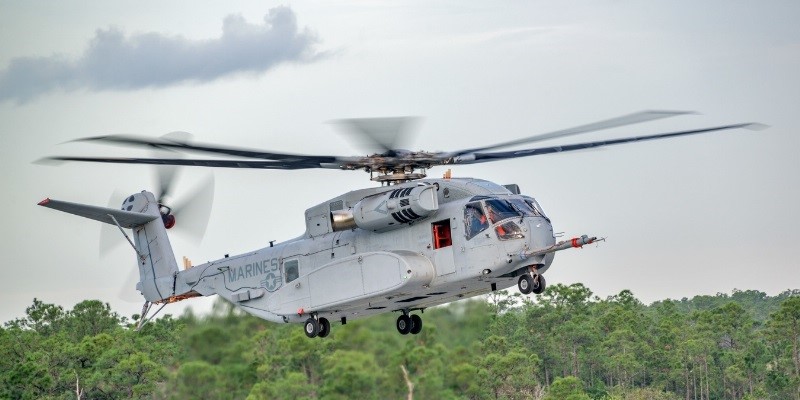 The Marine Corps’ prototype for the CH-53K King Stallion heavy lift helicopter, Engineering Development Model-1 (EDM-1), took flight for the first time Tuesday, according to a press release from the aircraft’s developer Sikorsky.

During the half hour flight in West Palm Beach, Fla. the test helicopter performed hover, sideward, rearward, and forward flight control inputs within 30 feet of the ground.

More than 2,000-flight hours will be logged between the EDM-1 and three EDM helicopters as part of a three-year-long test program phase.

Sikorsky’s CH-53K Program V.P. Mike Torok said the maiden flight was a major milestone for the program and that the event came on the coat tails of independent examinations of the helicopter’s concepts and subsystems, which included integrated system level testing of the Ground Test Vehicle. He added that the company will now start full aircraft system qualification through the flight test program.

“We have entered a much anticipated phase in this developmental program,” said Col. Hank Vanderborght, U.S. Marine Corps program manager for Heavy Lift Helicopters. “We have experienced significant learning at the system and sub-system levels, which continues to build our confidence in the capabilities of the 53K. With first flight behind us, we look forward to execution of the development and operational testing and the deployment of this incredible heavy lift capability to our warfighters.”

The U.S. Department of Defense has planned on the Marine Corps receiving 200 CH-53K, with the initial operation of the helicopters beginning in 2019. Each year during the program the U.S. Department of Defense and Congress will determine the funding that will be allocated. How much funding is provided will determine how many of the helicopters will be produced.