Carbon fiber composites—lightweight and strong—are great structural materials for automobiles, aircraft and other transportation vehicles. They consist of a polymer matrix, such as epoxy, into which reinforcing carbon fibers have been embedded. Because of differences in the mechanical properties of these two materials, the fibers can detach from the matrix under excessive stresses or fatigue. That means damage in carbon fiber composite structures can remain hidden below the surface, undetectable by visual inspection, potentially leading to catastrophic failure.

“Carbon fiber composites fail catastrophically, so you won’t see damage until the entire structure has failed,” said Chris Bowland, a Wigner Fellow at the Department of Energy’s Oak Ridge National Laboratory. “By knowing what’s going on within the composite, you can better judge its health and know if there is damage that needs to be repaired.”

Recently, Bowland and Amit Naskar, leader of ORNL’s Carbon and Composites Group, invented a roll-to-roll process to coat electrically conductive carbon fibers with semiconducting silicon carbide nanoparticles. This nanomaterial-embedded composite is stronger than other fiber-reinforced composites and imbued with a new capability—the ability to monitor its own structural health.

When enough coated fiber is embedded in a polymer, the fibers create an electrical network and the bulk composite becomes electrically conductive. The semiconducting nanoparticles can disrupt this electrical conductivity in response to applied forces, adding an electromechanical functionality to the composite.

If the composite is strained, the connectivity of the coated fibers is disrupted and the electrical resistance in the material changes. Should storm turbulence cause a composite airplane wing to flex, an electrical signal may warn the plane’s computer that the wing has endured excessive stress and prompt a recommendation for an inspection.

ORNL’s roll-to-roll demonstration proved in principle that the method could be scaled up for high-volume production of coated fibers for next-generation composites. Self-sensing composites, perhaps made with a renewable polymer matrix and low-cost carbon fibers, could find themselves in ubiquitous products, even including 3-D-printed vehicles and buildings. 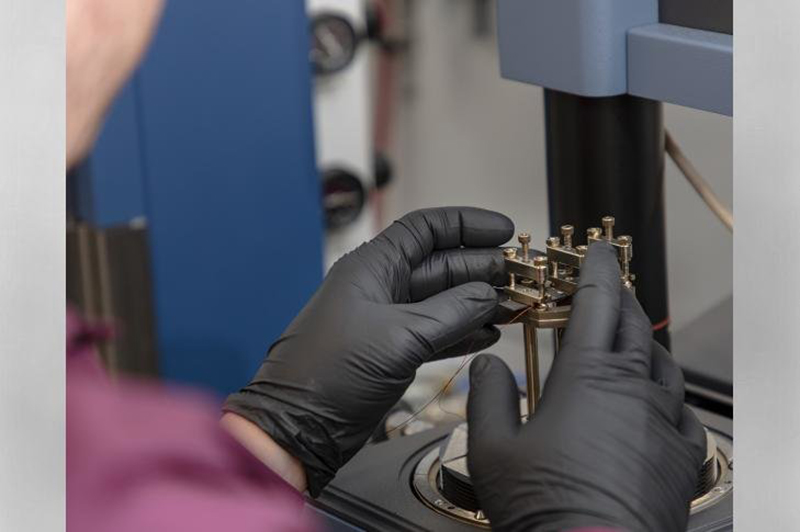 Bowland affixed electrodes on both sides of the cantilever. In a dynamic mechanical analyzer, he clamped one end to hold the beam stationary. The analyzer applied force at the other end to flex the cantilever 100 times. After every 10 flexes, strain was increased, and the electrical resistance was measured as a function of stress to quantify the structural health monitoring sensitivity. Credit: Carlos Jones/Oak Ridge National Laboratory, U.S. Dept. of Energy

To fabricate nanoparticle-embedded fibers, the researchers loaded spools of high-performance carbon fiber onto rollers that dipped the fiber in epoxy loaded with commercially available nanoparticles about the width of a virus (45–65 nanometers). The fiber was then dried in an oven to set its coating.

To test the strength with which nanoparticle-embedded fibers adhered to the polymer matrix, the researchers made fiber-reinforced composite beams with the fibers aligned in one direction. Bowland conducted stress tests in which both ends of this cantilever were fixed while a machine assessing mechanical performance pushed on the beam’s middle until it failed. To investigate the sensing capabilities of the composite, he affixed electrodes on both sides of the cantilever. In a machine called a “dynamic mechanical analyzer,” he clamped one end to hold the cantilever stationary. The machine applied force at the other end to flex the beam while Bowland monitored the change in electrical resistance. ORNL postdoctoral fellow Ngoc Nguyen conducted additional tests in a Fourier-transform infrared spectrometer to study chemical bonds within the composites and improve understanding of the enhanced mechanical strength that was observed.

The researchers also tested composites made with different amounts of nanoparticles for the ability to dissipate energy—as measured by vibration-damping behavior—a capability that would benefit structural materials subjected to impacts, shakes, and other sources of stress and strain. At every concentration, the nanoparticles enhanced energy dissipation (by 65 to 257 percent).

Bowland and Naskar have applied for a patent for the process to make self-sensing carbon fiber composites.