The first release of the next generation of LabVIEW engineering system design software has been developed by National Instruments Corp. LabVIEW NXG 1.0 is said to bridge the gap between configuration-based software and custom programming languages with an innovative new approach to measurement automation that empowers domain experts to focus on what matters most – the problem, not the tool. 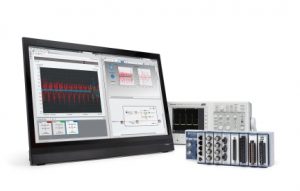 LabVIEW NXG is designed from the ground up to embrace a streamlined workflow. Common applications can use a simple configuration-based approach, while more complex applications can use the full open-ended graphical programming capability of the LabVIEW language, G. The 1.0 release of LabVIEW NXG helps engineers performing benchtop measurements boost productivity with new nonprogramming workflows to acquire and iteratively analyze measurement data. These nonprogramming workflows simplify automation by building the necessary code behind the scenes. For instance, engineers can drag and drop a section of code equivalent to 50 lines of text-based code. This is just one of the many ways LabVIEW NXG helps engineers focus on innovation rather than implementation.

LabVIEW NXG introduces a re-engineered editor with functions that experienced LabVIEW users often request. The refreshed editor further extends the openness of LabVIEW to integrate with a broader set of languages. The modernized editor improves programming productivity by streamlining the editor micro-interactions, user interface objects based on vector graphics and zooming capabilities.

The first release in the next generation of LabVIEW is planned as the first in a series of releases that will expand engineering capabilities from design to test. For more information on LabVIEW NXG 1.0 and LabVIEW 2017, visit www.ni.com/labview.