The world is changing in data-driven ways that are sometimes hard even for engineers to fully grasp. Call it the Industrial Revolution 4.0 or the Internet of Things or Cyber-Physical Systems or The Programmable World—but National Instruments is a key player in this “big data” driven world, with its LabVIEW software and CompactRIO hardware systems. NIWeek 2013, held earlier this month in hot, humid Austin broke all-time attendance records, with almost 4,000 people registered, further testament to the company’s central place in everything DAQ.

The opening keynote made mention of how smart systems are using data to make things more efficient, from the industrial manufacturing floor to our homes, with intelligent thermostats and lawn watering systems.

“The intelligence of these systems is literally changing the world … and a programmable world is also a platform-centric world,” said Eric Starkloff, senior VP of marketing. 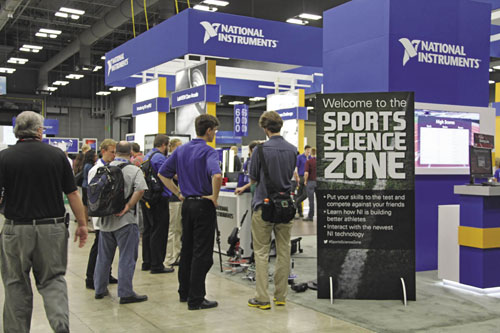 As was expected, a new version of LabVIEW was unveiled to the audience and released to the world. LabVIEW 2013 offers overhauled sample projects and an expanded training library for users.

“LabVIEW 2013 uses the most current and powerful technologies, making it a necessity for any developer,” said Ray Almgren, VP of marketing at National Instruments. “Not only does it support the NI Linux Real-Time OS, giving developers access to dynamic, community-sourced libraries, it’s the foundation of the new cRIO-9068 software-designed controller.”

The newest version of the software features: 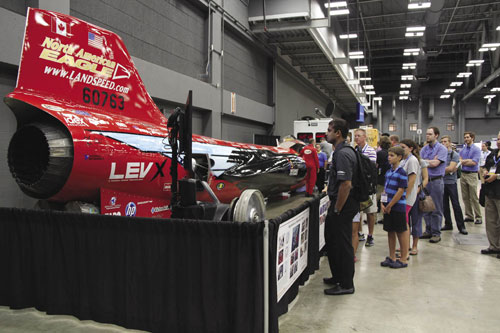 The other big news from the event was that NI has redesigned its CompactRIO controller from the inside out. The company touts the new cRIO-9068 software-designed controller as part of the most advanced and open system design platform for embedded control and monitoring systems.

Cortex-A9 processor and Xilinx Artix-7 FPGA. And significantly, it now has a Linux-based, real-time OS that provides greater flexibility for both LabVIEW Real-Time and C/C++ application developers. Yet, there is a consistent, familiar LabVIEW programming experience that ensures both new and existing designs take advantage of the updated technology with minimal effort. As Sanjay Challa, embedded software product manager for NI told me, “It is not only suitable for someone who is used to CompactRIO, but for those programmer operators who feel the need to dive into the nitty gritty, they can.” 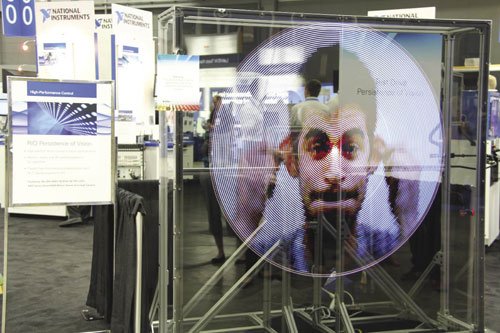 In addition to an extended operating temperature range of -40° C to 70° C, NI’s R&D teams re-examined every part of the controller’s design and made major improvements while maintaining complete backward code compatibility.

Finally, attendees learned—in dramatic fashion, thanks to a cement block and a sledgehammer—about the new NI cDAQ-9188XT, an 8-slot NI CompactDAQ Ethernet chassis designed for distributed or remote measurements in extreme environments. The cDAQ-9188XT can withstand temperatures from -40° to 70° C, 50 g of shock and 5 g of vibration. NI says that engineers in the automotive, military and aerospace industries have used it to successfully acquire data and avoid costly repeat tests.

“We’re using the cDAQ-9188XT to track pressure, vibration, velocity and more in our jetpowered vehicle as we try to break the world land speed record,” said Steve Wallace, data acquisition scientist for the North American Eagle Project. “So far it’s survived everything we’ve thrown at it and given us great results.”

The chassis is the first in the CompactDAQ platform to offer an onboard watchdog with defined safe states to protect tests and equipment. The platform includes 10 chassis options, three buses and more than 50 C Series modules with a range of connectivity and I/O.