Are these the drones you’re looking for? Three “Star Wars” devices are combining drones and online games.

Manufacturer Propel plans to sell three models based on the original movies. They are the X-wing Starfighter made popular by Luke Skywalker, the Imperial TIE fighter he battled and the Speeder Bike that zoomed through the forests of Endor.

The $179 drones fly up to 35 miles an hour and can make corkscrew turns. The remote control plays the John Williams score, and can hold a smartphone to run a linked app. Up to twelve can battle each other.

CEO Darren Matloff said Propel was working on drones that could race and battle when it got the “Star Wars” license from Disney.

The latest movie, “The Last Jedi,” will be released Dec. 15. 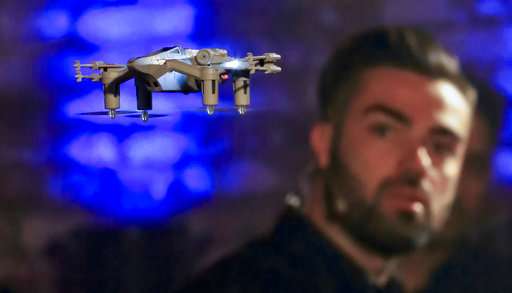 In this Tuesday, Aug. 29, 2017, photo, Jack Bishop, lead pilot for Propel, demonstrates the company’s new “Star Wars” Starfighter drone, unveiled during a media preview, in the Brooklyn borough of New York. Propel says it will start selling three “Star Wars” drones modeled after spacecraft from the original movies. The $179 items combine drones with online games, and up to 12 Star Wars drone pilots can battle each other. The latest chapter in the movie series, “The Last Jedi,” will be released Dec. 15, 2017. (Image Credit: AP Photo/Bebeto Matthews)