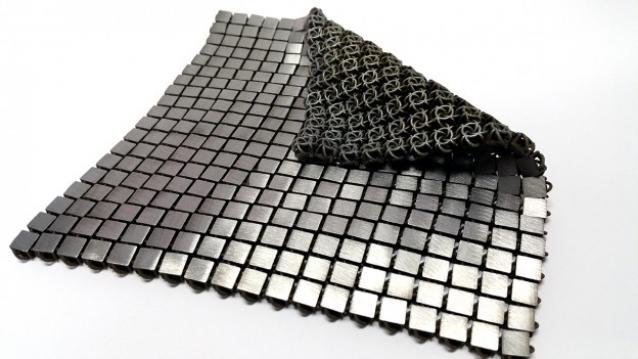 When most people think of fabrics, they envision a spring line from Barcelona’s hottest fashion designer.

Raul Polit-Casillas’s mother was, in fact, a fashion designer in Spain, but the fabrics he uses are far more suited for spacecraft than the runway.

The fabrics, which are foldable, could be used for large antennae and similar devices. They might also be used for shielding spacecraft from meteorites, making spacesuits, and capturing objects on the surfaces of other planets. On icy planets, the material might even be used to insulate spacecraft.

Perhaps one of the most fascinating aspects of this space-aged material is the fact that it can be printed using additive manufacturing.

“We call it 4D printing, because we can print both the geometry and the function of these materials,” says Polit-Casillas. “If 20th century manufacturing was driven by mass production, then this is the mass production of functions.”

The prototypes Polit-Casillas and his colleagues have created look a lot like chainmail with silver squares strung together. This design was built into the additive manufacturing process.

In fact, Polit-Casillas says he thinks astronauts may be able to print materials on an as-needed basis.

“I can program new functions into the material I’m printing,” he says. “That also reduces the amount of time spent on integration and testing. You can print, test, and destroy material as many times as you want.”