Hiding an object from heat-sensing cameras could be useful for military and technology applications as well as for research. Efforts to develop such a method have been underway for decades with varying degrees of success. Now, researchers report in ACS Nano that they have fabricated an inexpensive, easy-to-produce film that makes objects completely invisible to infrared detectors.

Several prior systems have been developed to mask the difference in temperature between an object and its surroundings. But each of these alternatives has weaknesses, such as difficulty in making the devices, the need for a power supply, the use of rigid materials or the addition of thick and heavy thermal blankets that can lead to heat buildup. Xuetong Zhang and colleagues wanted to find a better way. 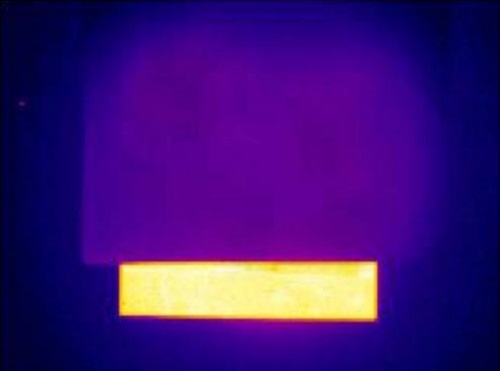 The researchers fabricated an aerogel film made of DuPont™ Kevlar® fibers. By itself, the aerogel turned out to be a good thermal insulator, but the researchers enhanced its capabilities by coating its fibers with polyethylene glycol (PEG) and a protective waterproof layer. PEG stores heat when it melts and releases heat when it solidifies. In simulated sunlight, the composite film covering an object soaked up heat from the sun while only slowly increasing in temperature, just like the surroundings, making the object invisible to a thermal camera. When the light was turned off to simulate night, the coating gradually surrendered its stored heat energy to match the surroundings. Without the coating, the object heated up or cooled off much faster than its environment, making it visible. In a second type of application, a combined structure consisting of aerogel films and the PEG composite film could hide hot targets from a thermal camera. The researchers say their film performs comparably to other stealth films but is simpler and cheaper to make.