Last year’s final enrollment numbers under President Barack Obama’s healthcare law fell just short of a target the administration had set, the government reported Friday. The numbers are important because the insurance markets created by the president’s 2010 healthcare law face challenges building and maintaining enrollment. The marketplaces offer subsidized private insurance to people who don’t have access to job-based coverage.

The report from the Health and Human Services Department said about 8.8 million consumers were still signed up and paying premiums at the end of last year. HHS Secretary Sylvia M. Burwell had set a goal of having 9.1 million customers by then. So the administration didn’t miss its target by much — about 3 percent. However, the 2015 coverage year had started with 11.7 million people signed up. Measured from that initial starting point, the attrition rate is a lot higher, about 25 percent. 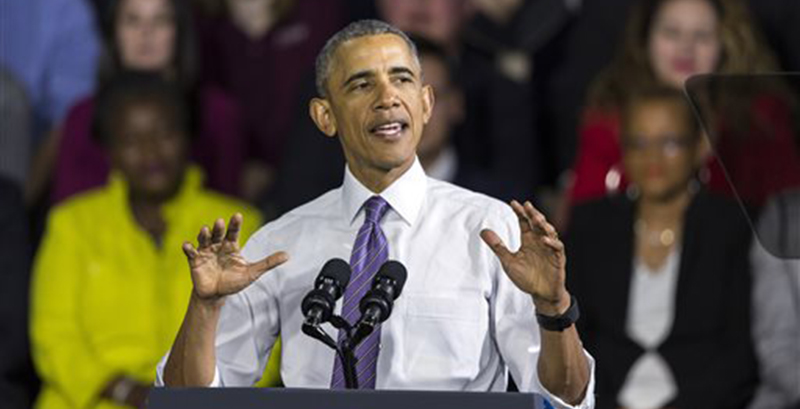 President Barack Obama speaks from the United Community Center Thursday, March 3, 2016, in Milwaukee, Wis. The President traveled to Milwaukee to celebrate the city’s victory in the Healthy Communities Challenge, a competition between 20 cities to increase the number of Americans with health insurance during the latest Health Insurance Marketplace open enrollment period. (Courtesy of the Associated Press)

People drop coverage for many reasons. Some find a job that provides health care benefits. Others aren’t able to keep up their monthly premiums, despite generous taxpayer subsidies. Advocates say part of the churn is due to consumers who get tripped up by paperwork requirements for verifying U.S. citizenship, legal immigration and income. The law’s subsidies are based on income, and people without legal permission to be in the country cannot buy coverage even if they pay the full premium themselves.

Friday’s report from the administration said 500,000 people had their coverage terminated because of problems documenting citizenship and immigration status, while 1.2 million had their subsidies “adjusted” because they couldn’t fully detail their incomes. Advocates say the vast majority of people with income discrepancies lose their entire subsidy, prompting them to drop coverage since they can’t afford the full premium.

The administration says it’s working to try to prevent some of those paperwork problems this year. But officials are sensitive to criticism from Republicans opposed to Obama’s law that the program is vulnerable to fraud. About 12.7 million people have signed up for coverage through the insurance markets this year. Burwell’s goal is to have 10 million still enrolled at the end of the year. That would represent an attrition rate of 21 percent.