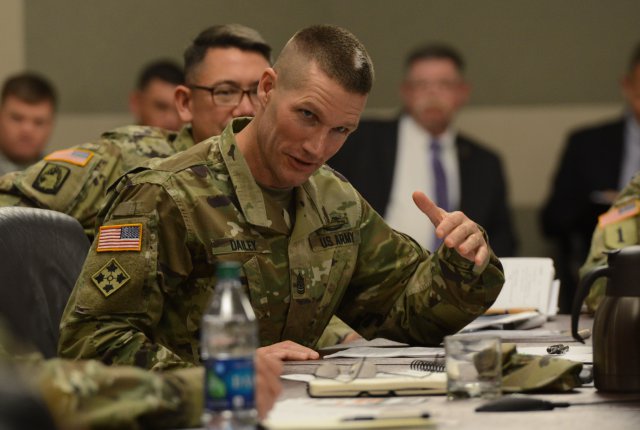 Sgt. Maj. of the Army Daniel A. Dailey responds to noncommissioned officer input during the chief of staff of the Army-sponsored Noncommissioned Officer Solarium II, held at the U.S. Army Command and General Staff College on Fort Leavenworth, Kansas.

With proliferation of the use of social media by Soldiers, particularly among junior Soldiers, what is said online goes worldwide instantaneously and is often difficult to retract, said Leisenring, who is with Company B, 1st Battalion, 111th Infantry Regiment, Pennsylvania Army National Guard.

Leisenring and dozens of noncommissioned officers, or NCOs, shared their thoughts with Sgt. Maj. of the Army Daniel A. Dailey during the chief of staff of the Army-sponsored NCO Solarium II, held at the U.S. Army Command and General Staff College here, Nov. 18-20.

To further that analogy, Leisenring pointed out that good NCOs have always made it a point to walk through the barracks unannounced during off-duty hours, not necessarily to spy on bad behavior, but to show concern and presence.

Today, what goes on social media sites should also be important to NCOs, he said, not just from a standpoint of misconduct, but also from the care and compassion perspective.

For instance, while not on Facebook himself, Leisenring said he gets feedback from Soldiers who interact with others on social media. In at least one instance, a Soldier with suspected suicidal ideations was reported to him and help was rendered.

Dailey agreed with the importance of monitoring social media and he admitted that like Leisenring, he too is not on Facebook, Twitter or other social media outlets. But, a good NCO isn’t required to monitor social media sites, he said. He or she creates a climate of trust and communication, whereby if other Soldiers see something amiss, they correct it or bring it to the attention of their NCO.

Dailey pointed out that this requires NCOs who are engaged, and genuinely concerned for the welfare of their troops and who understand the impact of social media. Otherwise, an NCO who is disengaged or stagnant will probably dismiss what goes online after hours as none of their business.

Disparaging remarks against the nation’s leaders, those in the Soldier’s chain of command and co-workers are not only hurtful, they can have a strategic impact, Turon said. Even jokes can come off as sexist, racist, culturally insensitive or religiously intolerant, even when not meant to be.

This may not seem fair, he said, but people often “look at content, not context.”

Turon said he doesn’t advocate automatic punishment for every comment. Sometimes there’s a gray area where Soldiers say something they don’t realize is offensive or hurtful, but might be to some. In those instances, a good NCO will provide compassionate guidance, pointing out how words or photos can be misconstrued. It boils down to good leadership.

In other cases, online misconduct can be purposeful and in those instances, action should be taken, he said.

Army officials said if online misconduct is reported to the military police or Criminal Investigation Division, there are now criminal codes in place to track those cases. Discussion of the impact of online conduct is being incorporated into climate surveys as well.

Master Sgt. Michelle Johnson, Dailey’s public affairs advisor, said if online misconduct is reported to the military police or Criminal Investigation Division, there are now criminal codes in place to handle those cases. She added that online misconduct is being incorporated into climate surveys as well.

Turon said he advises his Soldiers that if they wouldn’t want to say something on TV, they certainly should not want to say it online, as “everyone in the world is tuned in and how they interpret it is not up to you.”

Soldiers have frustrations and strong opinions on a variety of topics, but he said, they should step back and think it over before publishing those remarks.

The nation’s enemies, the Islamic State among them, have become savvy social media users, Turon added. Remarks said online can be used by them against the U.S., and that gets into the area of operational security. He said more Army G-6 involvement on the topic would be beneficial.

Under the topic of hazing, it states: “It need not be committed in the physical presence of the victim; it may be accomplished through written or phone messages, text messages, email, social media, or any other virtual or electronic medium.”

Coburn said revisions that will come out next year will hopefully address the topic more fully in depth with definitions, potential adverse effects, reporting processes and penalties. A separate section on the topic would be ideal, he said.

Dailey said some Soldiers think they wield a “Spartan shield” when they log online after hours, meaning that they believe they can say whatever they like on their own time. “There’s no such thing as misconduct off or on duty. It’s all misconduct.

As far as being the target of criticism and snarky comments, Dailey said “more people write bad things about me online than probably anyone else.”

Engaged leadership at every level will ultimately get this problem under control, he said.

Besides online misconduct, a number of other topics were addressed during the solarium. Among them was training and education.

NCOs need better guidance in how to train, the right people need to be selected as trainers and an extra week needs to be added to the NCO education system, he suggested.

Hull provided an example of realistic and relevant training he once had when he was with an explosive ordnance disposal unit. Instead of scripted training, the NCOs were given the responsibility for developing their own training plan for finding and clearing a chemical weapons cache at a location never before seen, working with an infantry platoon they’d never operated with.

Planning and executing the mission required a lot of higher order critical thinking and combined a lot of skills and tasks that are normally taught in isolation, Hull said. The training crossed all lanes.

Another suggestion he had was a training stand-down two days a month, where small-unit NCO leaders spend quality training time with their troops, developing their own training plan. Hull said this type of training was conducted in a unit he was with overseas, but he hasn’t seen it done stateside.

Hull admitted that there seems to be an ever-increasing amount of mandatory training requirements, a lot of it conducted online.

Dailey said he agreed with much of Hull’s input, but some mandatory training is required by law and he doubts it will ever go away. It’s commanders’ responsibility to prioritize the type of training Soldiers engage in, he added.

Also, emphasis increased on critical thinking skills as opposed to repetitive tasks – although a certain amount of repetitive training is still necessary to gain fundamental skills, particularly in basic training, he said.

The leadership schoolhouses are making training more realistic, relevant and rigorous, as well as making it more difficult to pass a course by doing the bare minimum, he added.

Solarium is an Army chief of staff initiative that began in 2014, with the goal of informing and shaping the future direction of the Army. The concept was drawn from Project Solarium, a national-level exercise in strategy and foreign-policy design led by President Dwight D. Eisenhower in 1953. That effort produced a U.S. national security document that laid the foundation for a Cold War policy that lasted for decades.

There have been other solariums since, two with captains and two with NCOs, including this one. A solarium with warrant officers is scheduled for early next year.

Lt. Gen. Robert B. Brown, commander of the Combined Arms Center, provided insights about how solarium is conducted during his closing remarks, Nov. 20.

He said the chief and others wrestled over deciding whether or not to provide solarium participants with information regarding ongoing efforts by senior leaders to reform and improve things. The decision, he said, was not to do that.

Other ideas, he said, were fresh and from a different perspective. All ideas will be considered and taken seriously.

Brown noted that during past solariums, some of the participants went back to their units and conducted local solariums. That “surprised us in a good way,” he said.