Origami and high-performance textiles are transforming architecture plans for smart human habitats and research stations on the Moon and Mars. Initial field tests of the MoonMars project’s origami prototype will be presented at the European Planetary Science Congress (EPSC) 2018 in Berlin by Dr. Anna Sitnikova.

MoonMars is a collaboration between the International Lunar Exploration Working Group (ILEWG), ESA-ESTEC, research institutions and textile architect studio Samira Boon. The MoonMars team have incorporated origami structure into digital weaving processes to sculpt complex forms that are compact to transport and easy to deploy through inflatable, pop-up or robotic mechanisms in extraterrestrial environments.

“Origami structures made of textiles can be unfolded into a myriad of different shapes. They are lightweight. They can be easily deployed and re-used in different configurations and sizes for flexible spatial usage. Structures remain functional in changing circumstances, thereby extending their useable life-span,” said Sitnikova, who leads the MoonMars project on behalf of the ILEWG.

In the hostile environment of space, high-performance textiles and the flexibile nature of origami can provide unique architectural advantages. The angled facets of origami structures mean that incoming micrometeorites are less likely hit surfaces at 90 degrees, dissipating the energy of potential impacts and the risks of penetration, thus protecting astronauts inside habitats. Solar panels embedded in shape-shifting textiles can follow the Sun to gather more energy through the day. Transparent and opaque facets can change direction to alter internal lighting and climate conditions.

Following initial tests of a prototype entrance tunnel during the EuroMoonMars simulation at the European Space Agency’s ESTEC facility in April 2018, the MoonMars team is now planning an ambitious series of trials for 2019. In June, the IGLUNA project, led by the Swiss Space Center, will include tests of an origami habitat in the glacier above Zermatt in Switzerland. In September 2019 the team will travel to Iceland to participate in a campaign inside a lava-tube cave system.

“We’ve just returned from a scouting trip and have selected the cave systems of Stefanshellir and Surtshellir, which has large galleries and a very elaborate tunnel system. We are provisionally looking at setting up a small habitat, implementing knowledge from previous demonstrations of our origami tunnel and woven domes,” said Sitnikova. 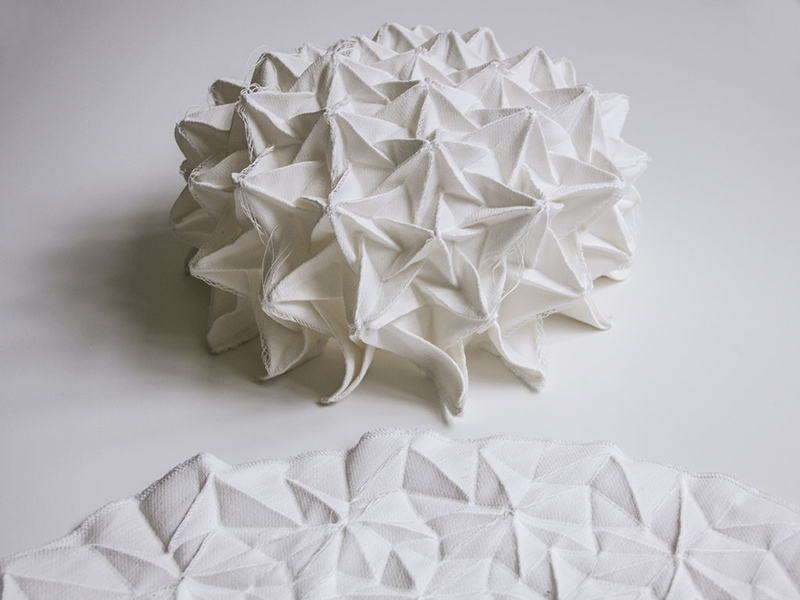 The next design milestone will be a self-deployable origami habitat.

“Origami for space architecture promotes cross-disciplinary approaches and applications, providing state-of-the-art production and design methods,” said Sitnikova. “Habitats enhanced by such structures are temporal and alive as they are able to transform and redefine themselves in resonance with human and environmental factors.”