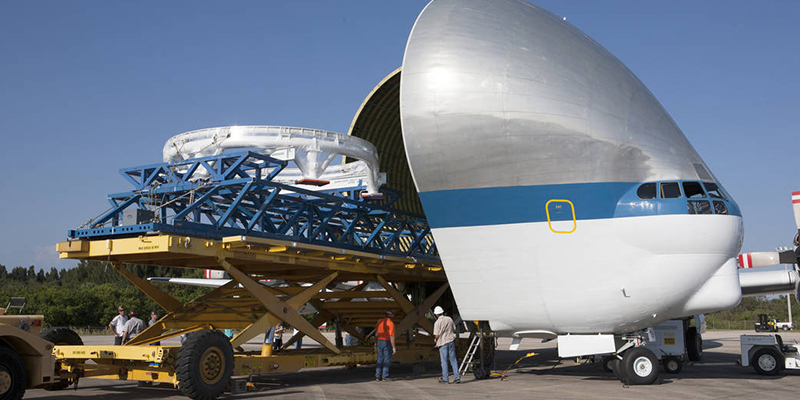 The Orion spacecraft service module stacking assembly interface ring and stack holding stand are secured on a special transportation platform and are being loaded into NASA’s Super Guppy aircraft at the Shuttle Landing Facility at NASA’s Kennedy Space Center in Florida.

A full-size test version of the Orion service module, provided by ESA (European Space Agency), for Orion will arrive at Plum Brook Station this month, where it will be evaluated in the Space Power Facility during a multi-month test campaign to ensure it can withstand the trip to space.

The service module is a critical piece of Orion and provides air, water, in-space propulsion and power for the spacecraft. Testing on the crew module adapter test article for the service module began in July 2015.

Engineers are using a “building block” approach to testing, in which they evaluate each piece as the elements composing the service module are stacked atop each other to validate the module.

Orion is the spacecraft that will launch atop NASA’s Space Launch System rocket on Exploration Mission-1 in 2018. ESA, along with its contractor Airbus, is providing the service module for Orion’s next mission, a partnership that will bring international cooperation to the journey to Mars.