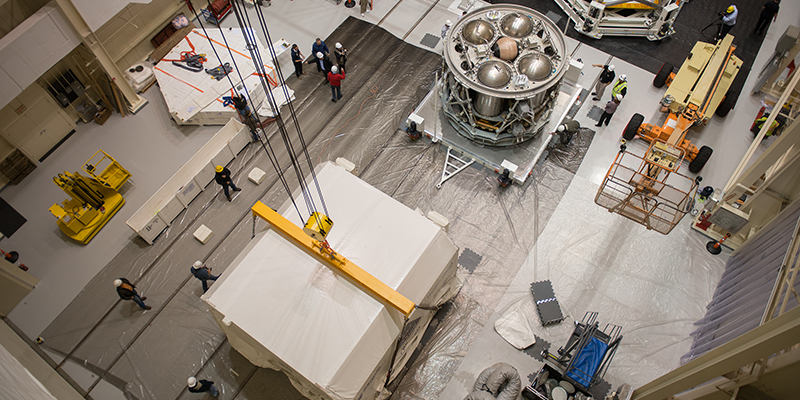 NASA is about to begin testing the heart of Orion’s power systems at the world’s largest, most powerful space environment simulation facility early next year.

Test engineers at NASA Glenn Research Center’s Space Power Facility (SPF) in Sandusky, Ohio, are preparing to put a full-size test version of the European Service Module (ESM) for the spacecraft through a series of crucial tests to verify the structural integrity of the hardware to withstand the dynamic environment of launch into space atop the agency’s Space Launch System (SLS) rocket.

Engineers will begin to evaluate the integrated stack hardware provided by ESA (European Space Agency) and its partners in February 2016. The hardware brings together new technology and lightweight materials while also taking advantage of spaceflight-proven elements.

“We added new facility capabilities for environmental testing over the last several years to meet the demands of validating the systems on the Orion ESM,” says Jerry Carek, SPF facility manager. 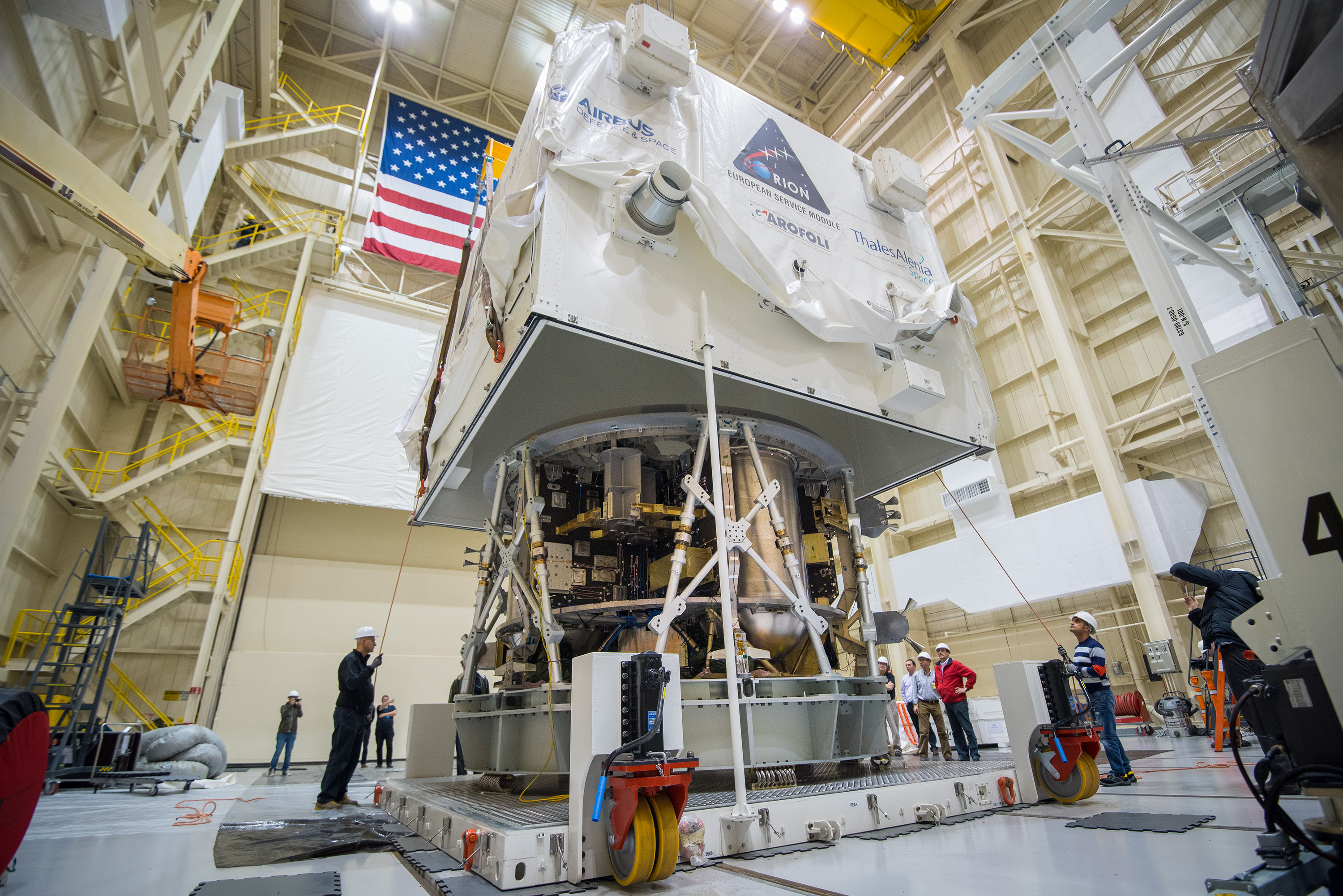 ESA’s European Service Module arrived in Cleveland in November and was transported to NASA Glenn’s Plum Brook Station for testing in the Space Power Facility in 2016. Credits: NASA

The first test will focus on the deployable solar array wing. Built by ESA partner Airbus DS, the solar arrays span 62 feet and engineers want to ensure the wing fully extends and retracts on command in the proper configuration.

During March and April, the test article will move into the world’s most powerful spacecraft acoustic test chamber to be pummeled with noise equivalent to 20 jet engines at full thrust.  Each element of the ESM, at times separately and then fully assembled, will be blasted with at least 152 decibels and 20-10,000 hertz of sound pressure and vibration.

Moving into the Mechanical Vibration Facility, from May through July, the test article will be placed on a vibration table that simulates the shaking the spacecraft will expect when launching on top of its rocket.  The table is attached to a 4.5 million pound concrete seismic mass anchored 50 feet into bedrock using 106 tension anchors.

“A series of repeated configuration tests will vibrate the stacked parts of the ESM from every possible angle,” says Robert Overy, chief engineer of the ESM Integration Office at NASA Glenn. “We want to push it past the extremes it might experience in the launch environment.”

The ESM is fitted with three protective fairings built by NASA’s prime contractor for Orion, Lockheed Martin. The fairings protect the avionics and electronics during ascent into space, but will eventually jettison off the spacecraft by a series of pyrotechnic shocks.

Engineers will test the effectiveness of the pyro-shock action near the end of August. They will also conduct a pyro-shock test of the spacecraft adaptor to simulate the shock the service module will experience during separation.

Finally, the solar array deployment test will be conducted once again on the fully stacked ESM.

The test campaign aims to analyze and validate every element and function of the structural test article, which represents Orion’s power and life support systems.

The tests are critical to ensuring the flight readiness and structural integrity of the module containing all the air, nitrogen and water for the astronaut crew, as well as in-space propulsion, batteries and solar arrays to generate power during deep space missions.

The Orion spacecraft is being developed to send astronauts to destinations including an asteroid placed in lunar orbit and on a journey to Mars. It will launch on the agency’s SLS rocket from a modernized spaceport at the NASA’s Kennedy Space Center in Florida.

The first exploration mission of Orion and SLS will allow NASA to use the lunar vicinity as a proving ground to test technologies farther from Earth, and demonstrate it can get to a stable orbit in the area of space near the moon in order to support sending humans to deep space.