Researchers at Columbia Engineering have demonstrated for the first time a new technique that takes its inspiration from the nacre of oyster shells, a composite material that has extraordinary mechanical properties, including great strength and resilience. By changing the crystallization speed of a polymer initially well mixed with nanoparticles, the team was able to control how the nanoparticles self-assemble into structures at three very different length scale regimes. This multiscale ordering can make the base material almost an order of magnitude stiffer while still retaining the desired deformability and lightweight behavior of the polymeric materials. The study, led by Sanat Kumar, Bykhovsky Professor of Chemical Engineering, is published June 7 online in ACS Central Science.

“Essentially, we have created a one-step method to build a composite material that is significantly stronger than its host material,” says Kumar, an expert in polymer dynamics and self-assembly. “Our technique may improve the mechanical and potentially other physical properties of commercially relevant plastic materials, with applications in automobiles, protective coatings, and food/beverage packaging, things we use every day. And, looking further ahead, we may also be able to produce interesting electronic or optical properties of the nanocomposite materials, potentially enabling the fabrication of new materials and functional devices that can be used in structural applications such as buildings, but with the ability to monitor their health in situ.”

About 75 percent of commercially used polymers, including polyethylene used for packaging and polypropylene for bottles, are semicrystalline. These materials have low mechanical strength and thus cannot be used for many advanced applications, such as automobile fittings like tires, fanbelts, bumpers, etc. Researchers have known for decades, going back to the early 1900s, that varying nanoparticle dispersion in polymer, metal, and ceramic matrices can dramatically improve material properties. A good example in nature is nacre, which is 95 percent inorganic aragonite and 5 percent crystalline polymer (chitin); its hierarchical nanoparticle ordering — a mixture of intercalated brittle platelets and thin layers of elastic biopolymers — strongly improves its mechanical properties. In addition, parallel aragonite layers, held together by a nanoscale (∼10 nm thick) crystalline biopolymer layer, form “bricks” that subsequently assemble into “brick-and-mortar” superstructures at the micrometer scale and larger. This structure, at multiple length sizes, greatly increases its toughness.

“While achieving the spontaneous assembly of nanoparticles into a hierarchy of scales in a polymer host has been a ‘holy grail’ in nanoscience, until now there has been no established method to achieve this goal,” says Dan Zhao, Kumar’s PhD student and first author on this paper. “We addressed this challenge through the controlled, multiscale assembly of nanoparticles by leveraging the kinetics of polymer crystallization.”

While researchers focusing on polymer nanocomposites have achieved facile control of nanoparticle organization in an amorphous polymer matrix (i.e. the polymer does not crystallize), to date no one has been able to tune nanoparticle assembly in a crystalline polymer matrix. One related approach relied on ice-templating. Using this technique, investigators have crystallized small molecules (predominantly water) to organize colloid particles, but, due to the intrinsic kinetics of these processes, the particles are normally expelled into the microscale grain boundaries, and so researchers have not been able to order nanoparticles across the multiple scales necessary to mimic nacre.

“This controlled self-assembly is important because it improves the stiffness of the materials while keeping them tough,” says Kumar. “And the materials retain the low density of the pure semicrystalline polymerso that we can keep the weight of a structural component low, a property that is critical to applications such as cars and planes, where weight is a critical consideration. With our versatile approach, we can vary either the particle or the polymer to achieve some specific material behavior or device performance.”

Kumar’s team plans next to examine the fundamentals that enables particles to move toward certain regions of the system, and to develop methods to speed up the kinetics of particle ordering, which currently takes a few days. They then plan to explore other application-driven polymer/particle systems, such as polylactide/nanoparticle systems that can be engineered as next-generation biodegradable and sustainable polymer nanocomposites, and polyethylene/silica, which is used in car bumpers, buildings, and bridges.

“The potential of replacing structural materials with these new composites could have a profound effect on sustainable materials as well as our nation’s’ infrastructure,” Kumar says. 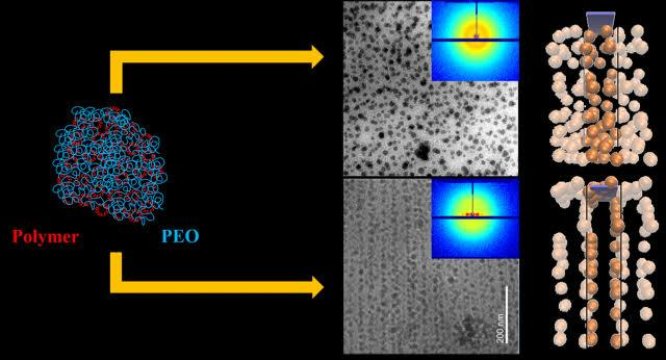 This is a figure illustrating that polymer crystallization speed can be used to control the spatial distribution of nanoparticles. Impurities (here, the nanoparticles) will become engulfed by the crystal if it grows too rapidly. However, when the rate slows, the crystal will expel the defects. (Image Credit: Sanat Kumar/Columbia Engineering)