A hospital patient who a Utah nurse said she was protecting when she refused to allow police to draw his blood has died.

William Gray, a commercial truck driver and reserve police officer, died late Monday of the injuries he suffered when a fiery July 26 crash left him with burns over nearly half his body, University of Utah Health spokeswoman Suzanne Winchester said.

Gray was unconscious at the Salt Lake City hospital when police detective Jeff Payne asked to draw his blood hours after the crash.

Nurse Alex Wubbels refused because hospital policy required a warrant or patient consent. Payne handcuffed her and dragged her outside.

Gray was hauling a load of sand in northern Utah when a pickup truck speeding away from police crossed the center line and hit his truck head-on, causing an explosion. State police had been trying to pull over the pickup driver after several people called 911 to report he was driving recklessly.

Gray was not suspected of wrongdoing,

The pickup driver, Marcos Torres, 26, died in the crash, and Utah police routinely collect such evidence from everyone involved in fatal crashes.

Dramatic video of Wubbels’ arrest caught widespread attention online amid national scrutiny of police use of force. Payne and the supervisor who backed him, Lt. James Tracy, were placed on leave amid internal and criminal investigations. 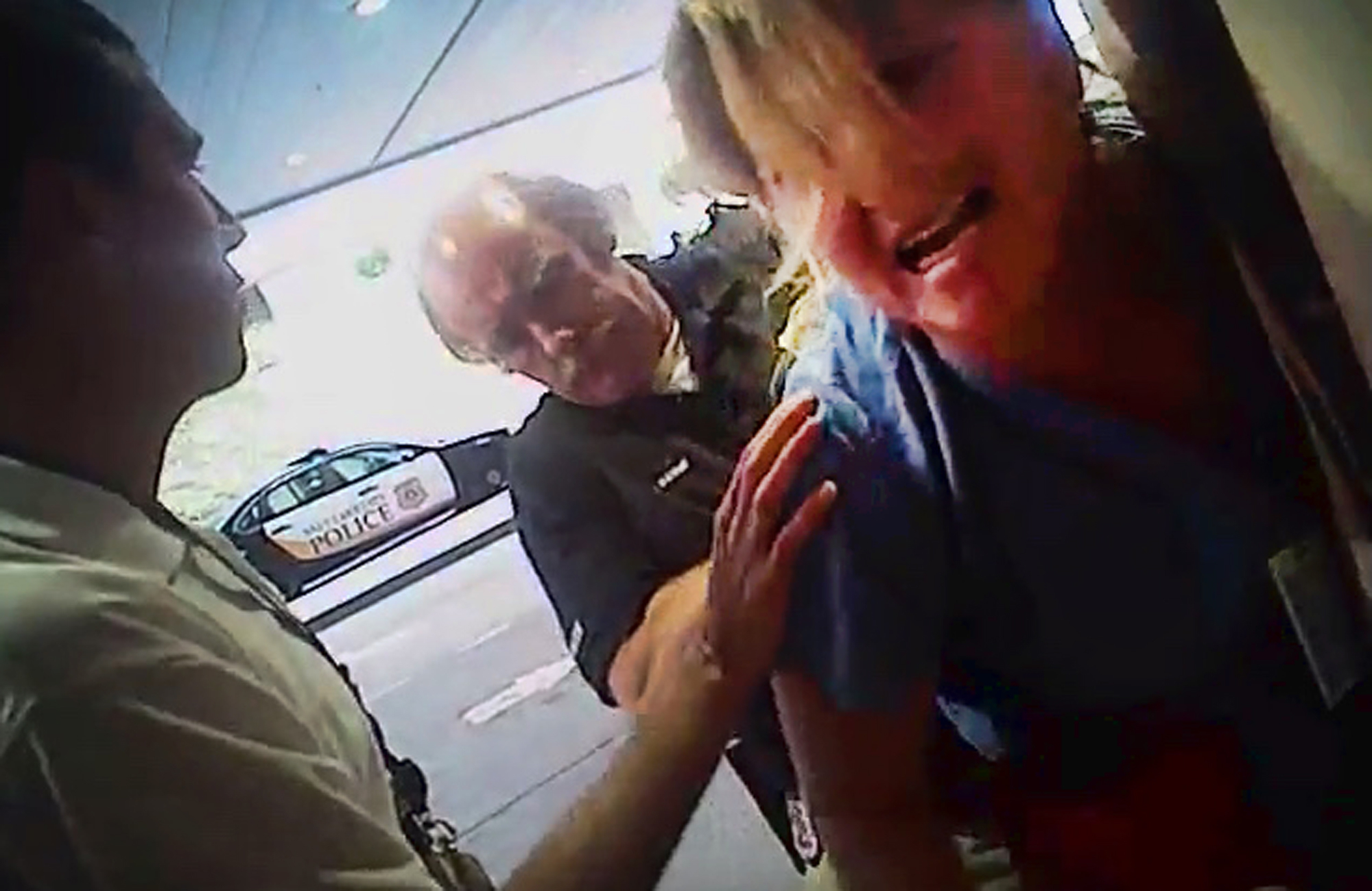 In this July 26, 2017, frame grab from video taken from a police body camera and provided by attorney Karra Porter, nurse Alex Wubbels is arrested by a Salt Lake City police officer at University Hospital in Salt Lake City. The Utah police department is making changes after the officer dragged Wubbels out of the hospital in handcuffs when she refused to allow blood to be drawn from an unconscious patient. (Salt Lake City Police Department/Courtesy of Karra Porter via AP)

Salt Lake City police apologized and Chief Mike Brown is now considering possible discipline. The officers’ union has said Payne and Tracy have unfairly been made into pariahs.

Asked to assess how Payne handcuffed and dragged Wubbels out of the hospital, Hartney said: “Any resisting of arrest is embarrassing and does not look good,” Hartney said.

Hartney acknowledged that the handling of police body camera footage is still new, but said he believes the footage of the arrest shouldn’t have been released until the investigation is complete.

Salt Lake City officials have stood behind their decision to release it to Wubbels and her attorney.

“Sadly, right now everyone wants to see things immediately,” Hartney said. “We do need to make sure we give that time for due process.”

Gray, 43, served with police in the southeastern Idaho city of Rigby. Chief Sam Tower said he was dedicated to the community of about 4,000 people and plowed snow from a sidewalk last winter so neighborhood kids wouldn’t have to walk in the street.

“Bill was truly the best of mankind,” Rigby police said in a Facebook post. “Always willing to help, always willing to go the extra mile. Bill was a big man, with a bigger heart. Everything about him was generous and kind.”

Tower previously thanked Wubbels for her efforts to protect Gray’s rights and prevent his blood from being drawn.