The New York Maker Faire is hard to describe to the uninitiated. It’s part science fair and part county fair, but it’s more than that. It celebrates the at-home tinkerers and the ambitious startups that bring dreams to life.

Product Design and Development’s editorial team was on-hand at this year’s festivities Oct. 1 and 2 to witness the do-it-yourself spirit the Maker Faire encourages.

Here are our top 5 picks from the event:

At the entrance to this year’s Maker Faire was a spectacular fire sculpture created by Orion Fredericks, a self-proclaimed “elemental artist.” The sculpture, titled “Gillaoptourous Corvus,” incorporated the anatomical features of a raven, a manta ray, a shark, and a praying mantis into a single 15 foot-long fire-breathing beast forged from stainless steel. The creation was controlled by propane burners. Fredericks also threw in a separate detonation chamber used to produce the beast’s explosive sound effects.

A group of high school students from Connecticut’s Darien High School embodied the true spirit of the Maker movement with their hydrogen-powered eco racer. The three-wheeled electric vehicle was powered by a 1 kW hydrogen fuel cell. It was developed, designed, and built by the students in a practical engineering class geared toward making energy-efficient cars for nine years.

The vehicle’s carbon tube frame and carbon composite body panels were constructed by the students, who taught themselves to weld so they could also fabricate the aluminum and steel suspension components.

The car can hit speeds of over 40 mph, but it must travel between 20 and 30 mph for greatest efficiency. At these lower speeds, the 1-liter hydrogen tank can take the car 60 miles or more.

After four years of refinements, the Darien Hydrogen Car competed successfully in the Shell Eco-Marathon on the streets of Detroit, Mich. The students took home third place in a field that included entries from some of the nation’s leading colleges and universities.

3D printers have come a long way since they first appeared at Maker Faire in 2006. The latest crop at the fair’s 3D Printer Village demonstrate new levels of usability, versatility, and affordability.

A few years ago, it was tough to find a printer for less than $1,000, but entry-level makers can now get a quality option for under $500. M3D’s Micro is one such compact, easy-to-use printer for only $349. The Micro features an auto-leveling bed and can build objects up to 4.5 inches on the side and up to 3.5 inches tall.

Pros with a larger budget can print much-larger objects with the Gorilla Maker. The dual-head, industrial-grade printers offer build volumes from 1.3 cubic feet tall all the way up to 16 cubic feet and can handle a wide range of materials. These machines start at $5,400.

If you really want to run with the big dogs, talk to the folks at See Me CNC. Their custom-built 17 foot-tall 3D printer, named the Part Daddy, prints objects up to 9.5 feet tall. Its vacuum-powered pellet feed system allows to you to print large objects at rates of up to three pounds an hour. The price tag comes in at a whopping $90,000, but you can buy a scaled-down version for as little as $549.

The Maker Faire attracts a lot of people who are using their creativity to make a difference in the world. OHorizons’ water purifier is an example of this type of technology.

The low-cost, low-tech water filter was developed for use in emerging economies by a team of Makers calling themselves OHorizons.

Made of inexpensive concrete and filled with layers of sand and gravel, the bio-filter can produce enough clean water for a family of five. The Makers are also developing plans for a simple plywood mold that allows non-governmental organizations or individuals to produce the filters locally for less than $50 apiece. The plans are open-sourced and freely available for download on the OHorizons website.

There are already 7,000 of these filters in operation throughout Africa and Asia, but the group recently embarked upon a project in Bangladesh that will create 200,000 water filters over the next six years. A separate pilot project in Kenya produced 100 of these life-changing devices in 2016. Plans are being developed to scale this project’s size in the years to come. 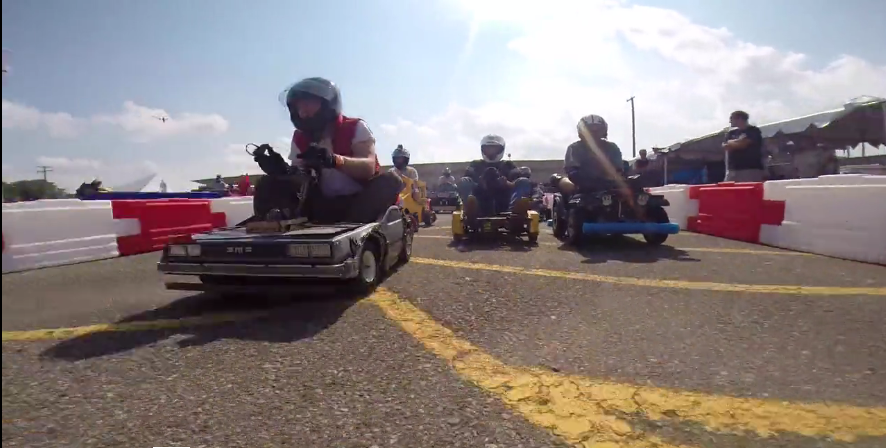 No Maker Faire would be complete without a Power Wheels Racing Series competition. Although they started out life as battery-powered kiddie toys, these radically modified electric go-carts can hit speeds of 25 mph or more.

Teams from around the country build their machines on a budget of $500 or less and compete against each other in a series of races that tax both their endurance and their creativity.

Winners are determined by race points earned on the track and Moxie points earned by amusing fans with odd cars, fanciful costumes, and zany kits performed in between heats. Mayhem and silliness keep the competition fun as drivers dodge, weave, and zip around the track.