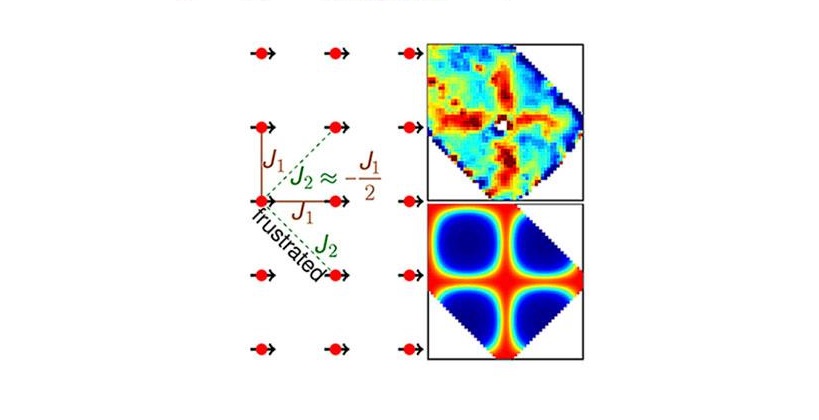 A diagram modeling competing or “frustrated” magnetic states in neighboring electrons. Condensed matter physicists use the term “frustrated” to describe a kind of magnet in which the spins fail to align into stable magnetic order. Image credit: U.S. Department of Energy

The U.S. Department of Energy’s Ames Laboratory has discovered and described the existence of a unique disordered electron spin state in a metal that may provide a unique pathway to finding and studying frustrated magnets.

Condensed matter physicists use the term “frustrated” to describe a kind of magnet in which the spins fail to align into stable magnetic order. In perfectly frustrated magnets called spin liquids, the disordered magnetism of these materials persists even at very low temperatures, and their unique properties are of interest in the development of quantum computing and high-temperature superconductivity.

“Perfectly frustrated systems, ones that really cannot resolve their magnetic states, are difficult to find in the first place, but even more so in a metal,” said Rob McQueeney, scientist at Ames Laboratory.

In insulating magnets, the interactions between spins that lead to frustration are set by the crystal structure of the lattice, and are relatively immutable. The discovery of this nearly perfectly frustrated metal provides a new avenue for tinkering with the magnetic interactions to achieve perfect frustration.

“Here, we have a little knob that we can tune. We know that some of these interactions that lead to frustration are mediated by conduction electrons, and we can tune a number of those very accurately–maybe you get a superconductor, maybe some other novel quantum state. There’s a lot of promise there.”