This panorama, photographed by an astronaut aboard the International Space Station, shows nearly the full length of Lake Powell, the reservoir on the Colorado River in southern Utah and northern Arizona. Note that the ISS was north of the lake at the time, so in this view south is at the top left of the image.

At full capacity, the reservoir impounds 24,322,000 acre-feet of water, a vast amount that is used to generate and supply water to several western United States, while also aiding in flood control for the region. It is the second largest reservoir by maximum water capacity in the United States (behind Lake Mead).

Landscape elevation changes are hard to see from space, but astronauts learn to interpret high and low places by their color. Green forests indicate two high places in the image that are cooler and receive more rain than the dry, low country surrounding the lake. The isolated Navajo Mountain is a sacred mountain of the Native American Navajo tribe and rises to 3,154 meters (10,348 feet). The long, narrow Kaiparowits Plateau rises nearly 1200 meters (4,000 feet) from Lake Powell to an elevation of more than 2300 meters (7,550 feet). More than 80 kilometers (50 miles) long, the plateau gives a sense of horizontal scale.

The region draws nearly 2 million people every year, even though it is remote and has few roads. Most of the area in view is protected as part of the Glen Canyon National Recreation Area and the Grand Staircase-Escalante National Monument—the largest amount of protected land in a U.S. national monument.

Astronaut photograph ISS048-E-73279 was acquired on September 6, 2016, with a Nikon D4 digital camera using an 800 millimeter lens, and is provided by the ISS Crew Earth Observations Facility and the Earth Science and Remote Sensing Unit, Johnson Space Center. The image was taken by a member of the Expedition 48 crew. The image has been cropped and enhanced to improve contrast, and lens artifacts have been removed. 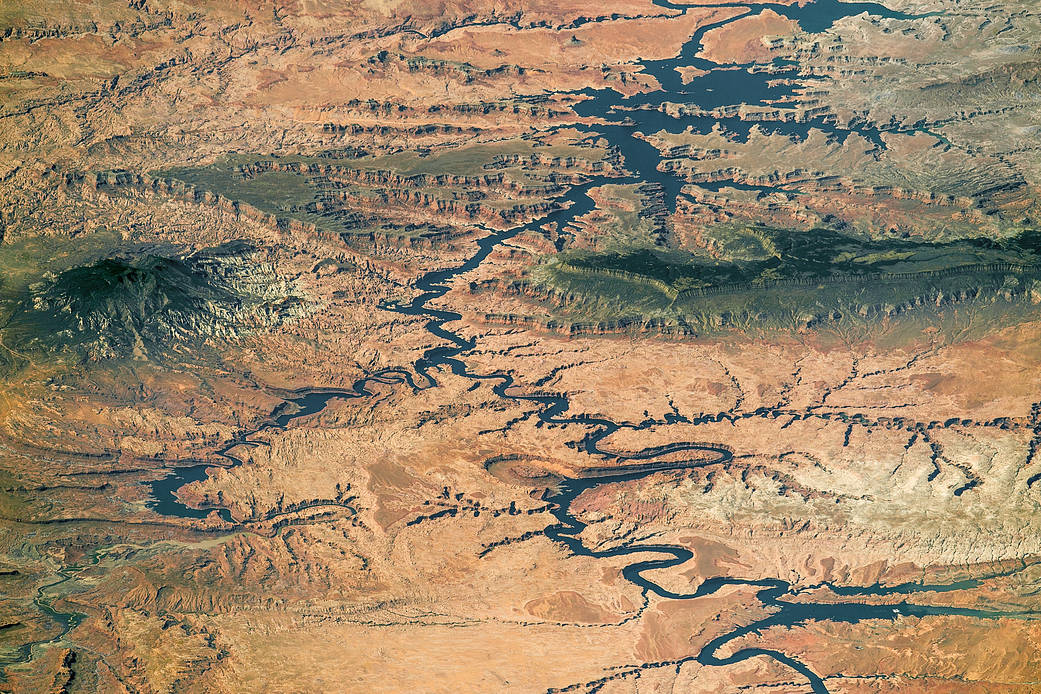