On Sept. 23 at 8:12 a.m. EDT (1212 UTC) the Global Precipitation Measurement mission or GPM core observatory estimated of hourly rainfall in multiple intense rainfall bands of thunderstorms around Maria’s western side. Rain was found falling at a rate of over 6.57 inches (137 mm) per hour and some thunderstorm tops in these rain bands were found to reach heights above 9.7 miles (15.7 km). GPM is managed by NASA and the Japan Aerospace Exploration Agency.

On Sept. 25 at 2:12 a.m. EDT (0612 UTC) the VIIRS instrument aboard NASA-NOAA’s Suomi NPP satellite provided tan infrared image of Hurricane Maria. The Infrared image provided forecasters with temperature data that showed where the strongest storms were located within the hurricane. Coldest clouds tops and strongest storms were in the southeastern quadrant where temperatures were as cold as or colder than minus 80 degrees Fahrenheit (minus 62.2 Celsius). NASA research has shown that storms with cloud top temperatures that cold can produce heavy rainfall.

On Sept. 25, National Hurricane Center forecaster Daniel Brown noted “Deep convection is primarily confined to the eastern semicircle of the circulation and the radius of maximum winds has significantly increased.” 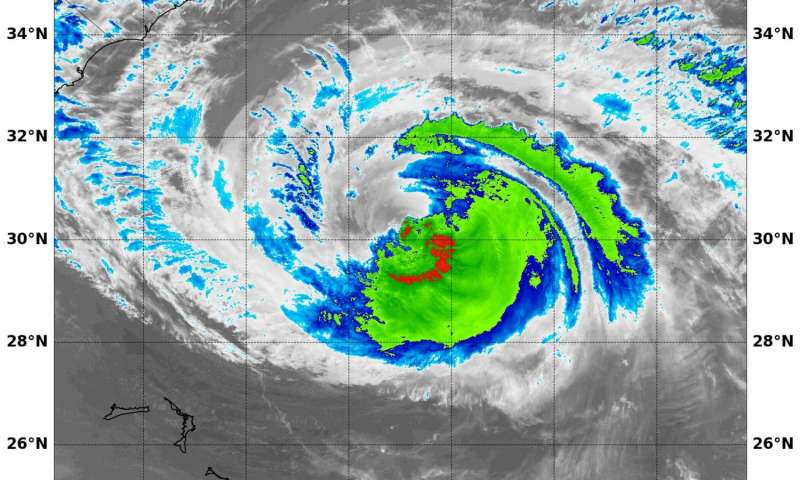 Watches and Warnings in Effect

A Storm Surge Watch is in effect from Cape Lookout to Duck.

Maria’s Location and Status on Sept. 25

Maria was moving toward the north near 7 mph (11 kph), and this general motion with some decrease in forward speed is expected through Tuesday night.

Reports from an Air Force Reserve Hurricane Hunter aircraft indicate that maximum sustained winds are near 80 mph (130 kph) with higher gusts. Gradual weakening is forecast during the next couple of days and Maria is forecast to become a tropical storm

Swells generated by Maria are affecting portions of the coast of the southeastern United States and Bermuda and will be increasing along the Mid-Atlantic and southern New England coasts today. Swells also continue to affect Puerto Rico, the northern coast of Hispaniola, the Turks and Caicos Islands, and the Bahamas. These swells are likely to cause life-threatening surf and rip current conditions.

On the forecast track, the center of Maria will move well east of the southeast coast of the United States during the next day or so. 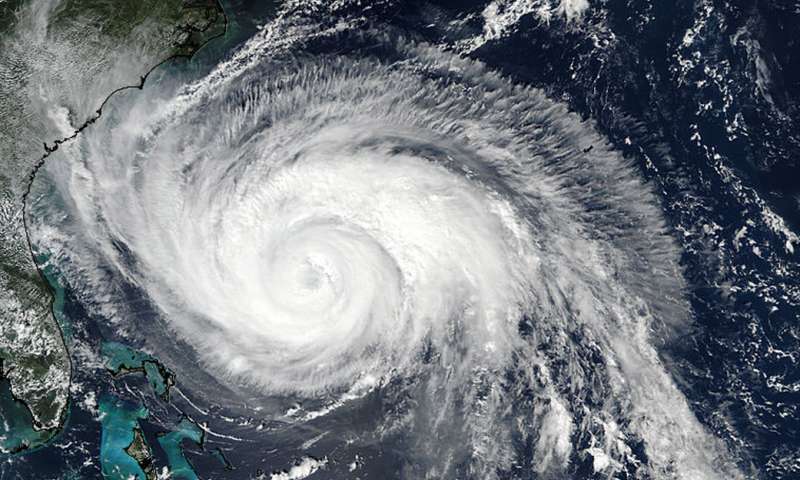 On Sept. 24 at 1:54 p.m. EDT (1754 UTC) the VIIRS instrument aboard NASA-NOAA’s Suomi NPP satellite provided this visible image of Hurricane Maria when it was northeast of Bahamas and east of the Florida east coast. (Image Credit: NASA)