In a unique image, NASA-NOAA’s Suomi NPP satellite passed over Hurricane Irma when the island of Barbuda was in the center of the storm’s eye.

At 1:35 a.m. AST/EDT on Sept. 6 , the Visible Infrared Imaging Radiometer Suite (VIIRS) instrument aboard the Suomi NPP satellite captured Category 5 Hurricane Irma as hit the island of Barbuda in the eastern Caribbean Sea, which is just north of the island of St. Johns. Barbuda is one of the two major islands in the Caribbean nation of Antigua and Barbuda.

In the VIIRS image, the eye of the storm appeared well-defined with powerful thunderstorms around it, indicative of an intense tropical system. Visible tropospheric gravity waves, which are indicative of upward convection (rising air that forms the thunderstorms that make up a tropical cyclone) within the storm and can impact aviation were also seen.

In an infrared close-up of the storm there was some evidence of the mesovorticies, which are also indicative of an intense tropical cyclone. The full moon provided visiblity at night that clearly showed mesovorticies over Barbuda as well as tropospheric gravity waves. 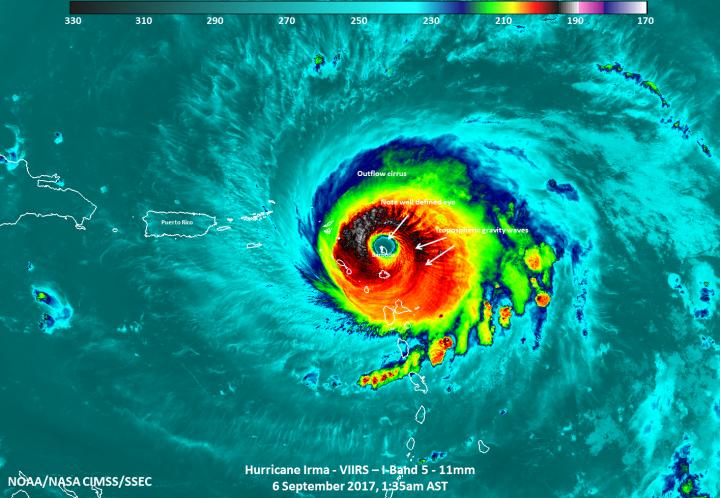