Fires broke out quickly this past weekend in northern California.  Sixty mile an hour winds did nothing to help either quell or stop the runaway fires from jumping fire lines and decimating whole neighborhoods.  Dry, hot conditions which have been problematic for much of the west coast this summer erupted into flames after a series of lightning strikes. October is always a difficult time in California for wildfires, but this year, the wildfire eruptions seem extreme even to the most seasoned Californian.  The deadly combination of lightning, winds, and hot weather which dries the landscape into tinder is all it takes to set off a wildfire that will consume thousands and thousands of acres in just a few short hours.

Fifteen fires ignited late Sunday evening, remained mostly uncontained, and are likely to continue spreading because of heat, low humidity and wind with many of these fires located in Sonoma Valley and Napa Valley, heart of California’s wine country.  Despite the massive number of firefighters deployed to fight the flames, most fires remain 0% contained at present.  Too many other factors are in play that make containment difficult including high winds, dry conditions, and low humidity.

NASA’s Aqua satellite collected this natural-color image with the Moderate Resolution Imaging Spectroradiometer, MODIS, instrument on October 09, 2017. Actively burning areas (hot spots), detected by MODIS’s thermal bands, are outlined in red. Each hot spot is an area where the thermal detectors on the MODIS instrument recognized temperatures higher than background. When accompanied by plumes of smoke, as in this image, such hot spots are diagnostic for fire.NASA image courtesy Jeff Schmaltz LANCE/EOSDIS MODIS Rapid Response Team, GSFC. Caption by Lynn Jenner 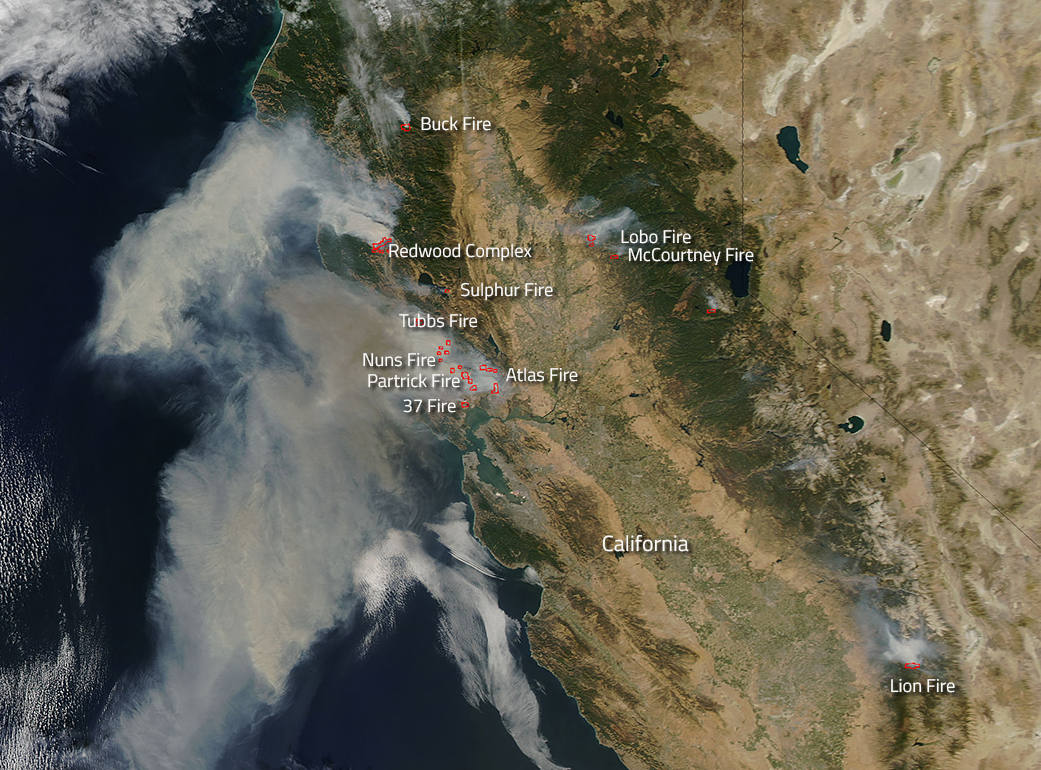