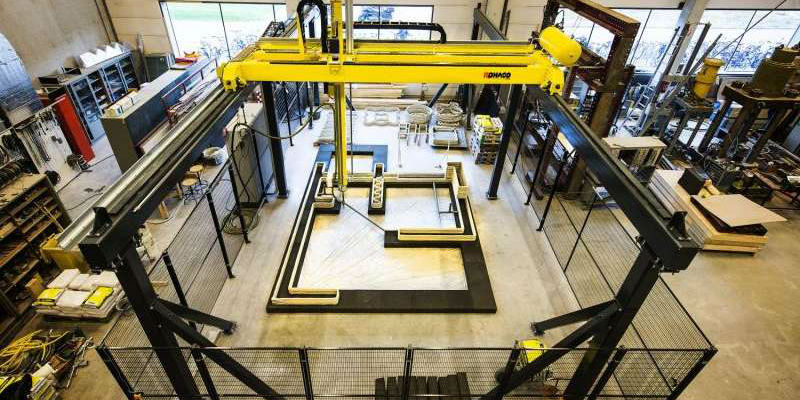 Last month Eindhoven University of Technology began using a concrete printer that enables objects of up to 11 meters long, 5 meters wide and 4 meter high to be printed. The university will be working with the building industry to develop knowledge over the course of a number of years to print pioneering and easily recyclable concrete products. Like complete walls, printed with every conceivable individual feature and requirement.

The concrete printer looks a bit like an overhead hoisting crane in a production hall but, instead of a hoisting cable, with a jointed, swivel printer head for concrete. Attached to this via a hose is a concrete mixing and pump unit. The Dutch company ROHACO built the concrete printer, the first of its kind and dimensions in the Netherlands. 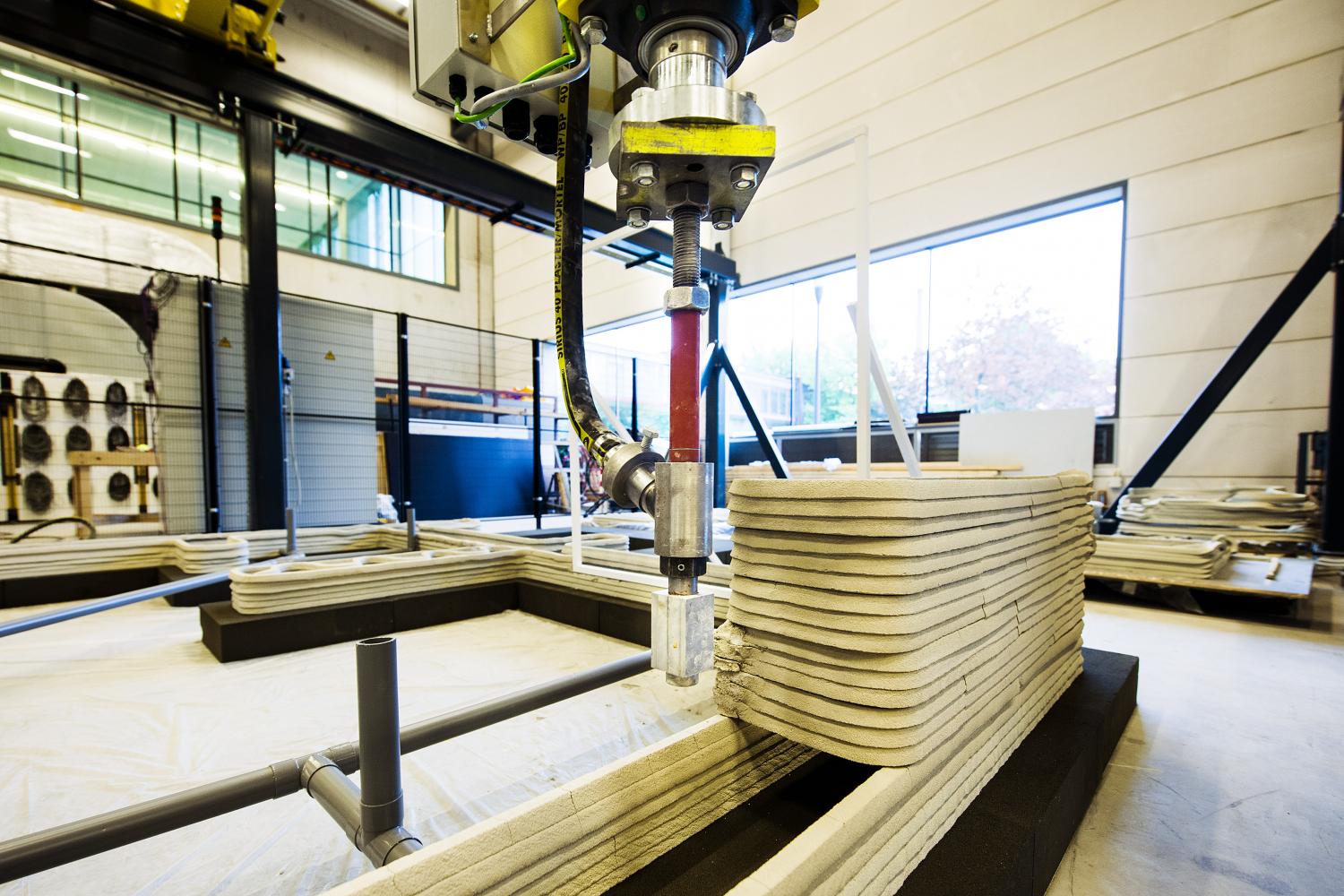 The concrete printer opens up a world of new possibilities. Theo Salet (professor of concrete structures) and PhD student Rob Wolfs are convinced of this. All it requires is new knowledge, techniques and materials since printing concrete is a quite different prospect to pouring concrete. One such new possibility lies in making very fine concrete structures. In traditional concrete pouring the formwork determines the ultimate shape of the concrete, and that is quite unwieldy. Concrete printing will enable builders to make details as small as a pea.

Another new possibility is to print all kinds, qualities and colors of concrete, all in a single product. For instance, a complete wall can be printed with every requisite functionality: fiber-reinforced concrete to make it strong, an active insulation layer to retain heat, dirt-repelling concrete on the outside to keep it clean and a layer on the inside that enhances the acoustics. It also means savings in terms of the internal and external outlet pipes of watertight concrete. Builders can also easily incorporate the individual requirements of users in the production process.

Printing concrete also allows smart components to be printed at exactly the right spot. Like wireless sensors, for instance to measure the temperature, or for lighting that comes on when someone enters the room, or for security purposes. 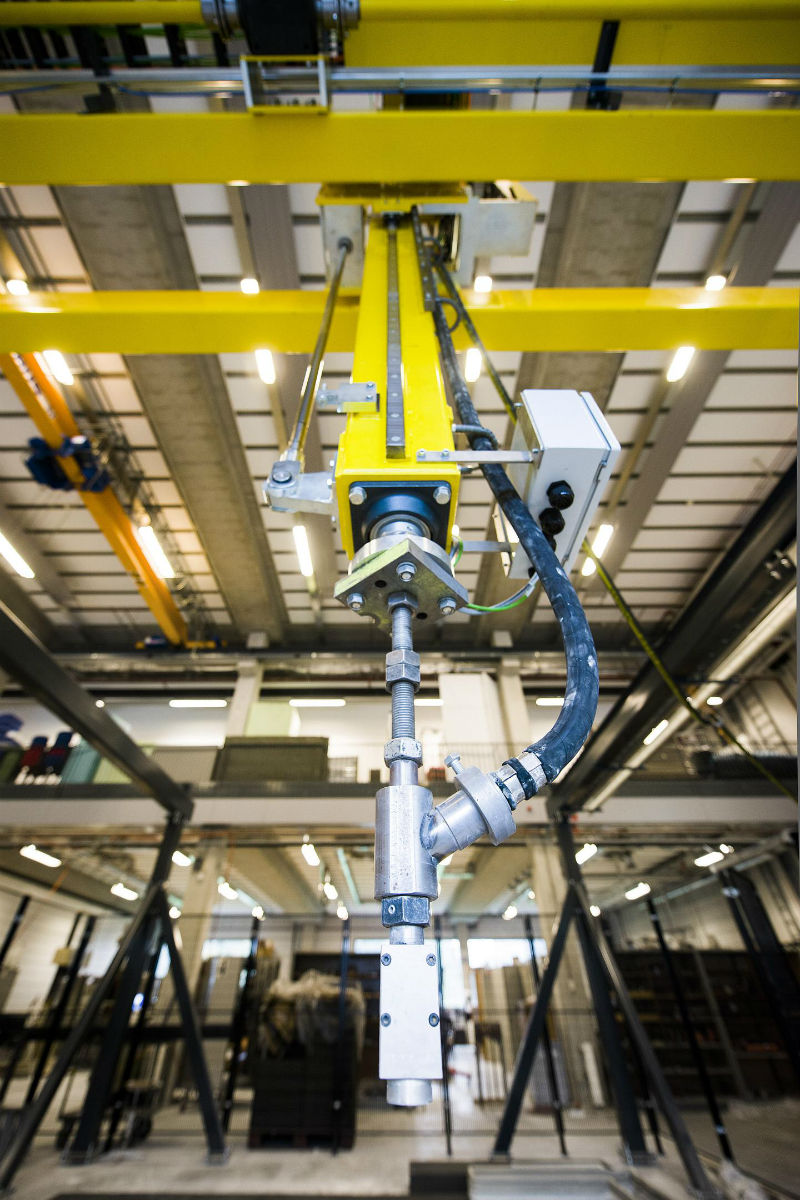 Before that stage is reached, there are still plenty of nuts for the researchers to crack. For example, when printing a new layer, the underlying layer has to have enough bearing capacity so that it does not collapse. At the same time, the underlying layer has to be moist enough to adhere to the new layer – a requirement that conflicts with the first one. The Eindhoven researchers will be investigating new kinds of concrete that will be able to comply with both requirements. They expect the first products to be available within five years, with safety a paramount consideration. Wolfs: “These are building products so safety is vital, which means the research must be thorough.”

The research project goes by the name 3D Concrete Printing (3DCP). The funding of around 650,000 euros comes from ten participating companies and TU/e.

Last week Thursday (22 October) there was an event for the building world about 3D concrete printing at TU Eindhoven, with the new concrete printer and the 3DCP project central. More than 400 companies and organizations registered, and there was a waiting list, Salet says. “That is quite extreme. It just shows how much interest there is in this new technology.”