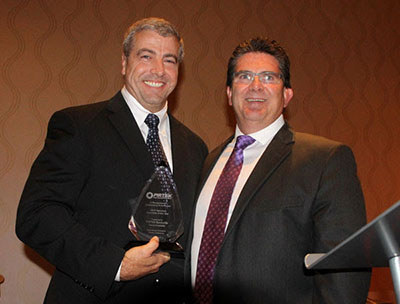 Pirtek Rockville in Rockville, Md., has earned top honors as the Pirtek USA’s National Franchise of the Year for 2015. The company presented the award during its annual conference to business owner David Entwistle for his franchise’s outstanding performance, operational excellence, commitment and enthusiasm for the brand.

“To be chosen for this award out of all the great PIRTEK franchises around the country says a lot,” Entwistle said. “Our team has worked so hard to make our location function at peak efficiency and quality. This is a nice recognition of all that effort, and we appreciate it.”

The company’s annual conference brings together the nearly 60 owners from across the U.S. to network, enhance their business development opportunities, and discuss and share strategies. Family members also attend, as the event features fun and lively entertainment options; this year’s conference was at the Renaissance Orlando.

Several other franchisees were honored during the event, including Ken Adair who received Pirtek’s National Top Sales Award for 2015 on behalf of Pirtek O’Hare in Elk Grove Village, Ill.—one of three company franchises he owns. His Pirtek McKinley Park in Chicago won the Midwest Regional Franchise of the Year.

“It’s an exciting time for all of us as we continue this wave of expansion across the U.S.,” said Glenn Duncan, executive director of Pirtek International. “All the new Service & Supply Centers, the enhanced product lines and the release of new Pirtek-branded products—we’re experiencing significant growth. Best of all, we have a wealth of highly motivated and talented business owners successfully leading their franchises.”

The company has launched 11 service and supply centers in the U.S. since 2014, and has released numerous fluid transfer products bearing the company brand, including hoses, fittings, oils and lubricants.