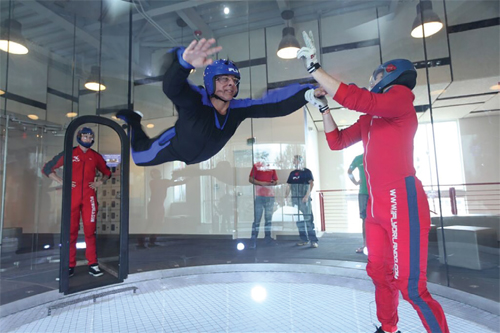 Over 5 million people have flown in a SkyVenture wind tunnel. The company’s flight chambers are made from some of the largest curved, tempered laminated glass ever cast.

Jumping out of a perfectly good airplane is foolhardy to some, but for others it’s the thrill of a lifetime. SkyVenture of Austin, Texas, re-creates the experience without ever boarding a plane. But providing a safe and realistic freefall simulation on the ground comes with challenges.

SkyVenture built the first vertical wind tunnel with wall-to-wall even flow in 1999. Until then, skydiving wind tunnels were uninsurable, inefficient fans that simply suspended people on a bubble of unstable air. Move too far to the side of the bubble and you simply fell off—wind tunnels were little more than high-risk novelties.

These new, more efficient versions are known as recirculating tunnels. They use four 600-hp, direct driven, 2.8-m vent-axial fans (rated at 400 hp for continuous use). The fans, each weighing in at 17,000 lb, are mounted on the top of the building to draw air up through the flight chamber at maximum speeds greater than 170 mph—equivalent to a Category 5 hurricane.

After the first tunnel was built, the company needed a control system that enabled easier operator control as well as simpler on-site installation. In 2005, the SkyVenture design team chose CC-Link communications to improve the operator interface, control operation and installation process. The company upgraded this original system from a Modbus communication scheme.

In this redesign, SkyVenture switched to a Mitsubishi Q Series PLC. The PLC used a CC-Link Master card within the Q Series PLC rack to control communications. CC-Link was then used to communicate with the four F740 VFDs using the Mitsubishi Electric FR-A7NC CC-Link interface cards. On the one communication line, the operator monitors volts, amps, kW, set frequency and alarms, as well as setting the operating frequency. With the previous system, the wind tunnel operator had to control all of these different functions over ten or more different communication cables. Retrofitting the four VFDs with the cards and the CC-Link cabling only took a few hours. A few ferrules later and communication within the tunnel and the entire facility was ready for operation. 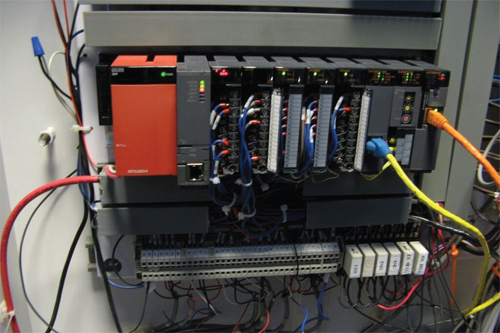 In the control system redesign, SkyVenture switched to a Mitsubishi Q Series PLC. The PLC used a CC-Link Master card within the Q Series PLC rack to control communications.

In addition, a CC-Link network was also controlling the air temperature in the flight chamber by opening and closing 20-x10-ft doors. These doors were connected to linear actuators driven by more Mitsubishi VFDs. The information on the status of the doors was then displayed on the HMI used by the operator.

Additional I/O, like air speed in the chamber, is monitored and displayed on the operator interface. This interface also provides predefined flight time options that the operator selects, which are then used to determine the remaining flight time (also displayed). 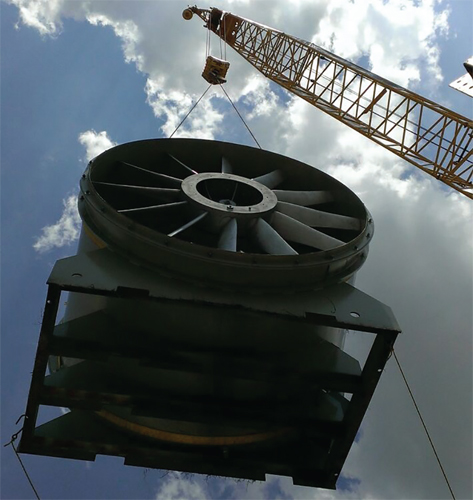 This image shows the installation of one of the 600-hp, direct driven, 2.8-m vent-axial fans.

SkyVenture’s Seattle facility has their most powerful vertical wind tunnel, capable of generating wind speeds approaching 250 mph. To maintain control of such powerful airflow, the system also monitors fan motor vibrations, temperature and safety shut down triggers that all have to operate in less than the blink of the eye. This information must be communicated with a user friendly HMI that personnel can use while the tunnels are in operation. Obviously, when all this takes place in a simulated Category 5 hurricane, speed is essential; the wind tunnel’s new network communicates instructions and information in milliseconds. But constructing the tunnels was one of the SkyVenture design team’s biggest challenges. 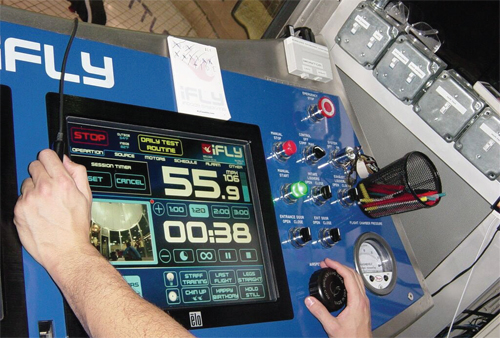 The team was tasked with designing and building a complex piece of machinery in locations all over the world using local labor. The key to success was in the simple implementation and install design. Primarily off-the-shelf components created a package that could be shipped anywhere and assembled by a crew that had likely never seen this type of machine before.

In particular, SkyVenture relies on the new control system components to simplify the wind tunnel control system installation—down to connecting a handful of wires in the field rather than having to wire up and ring out hundreds of connections.

Day after day and year after year the control systems operate at a rate of over 98 %.