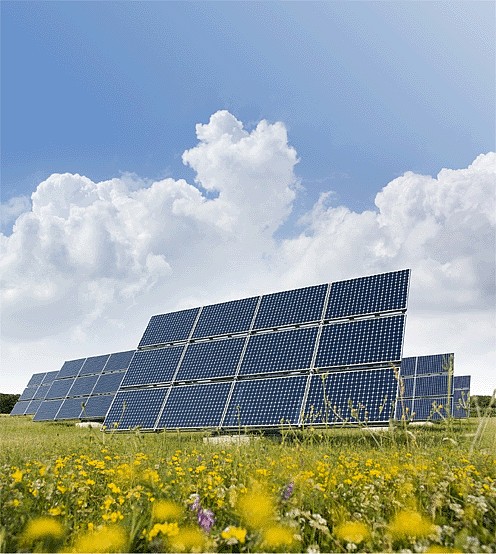 XsunX, Inc., is a young thin-film photovoltaic cell manufacturing company located in Aliso, California. It is currently constructing a solar module facility with a capacity to build and install modules for arrays totaling 25 MW during early 2009, and it plans to increase capacity to 100 MW by 2010.

The theory of operation is quite simple. When a solar cell is exposed to sunlight, some photons reflect off the solar cell surface. The low energy photons pass through the cell without affecting it. The solar cell silicon semiconductor layer absorbs the remaining photons with an energy greater than the silicon band-gap value.  The photons knock negatively charged electrons out of their orbits, which creates a flow of free electrons and complementary, positively charged holes.

Solar cells are designed to force all free electrons to move in the same direction, which produces direct electric current. Several techniques are known, but in the most mature and widely used type, each solar cell is fabricated as a large silicon p-n junction. In a certain way this is similar to a diode where the current can flow only in one direction. This technique can be referred to as “drift charge carrier separation.” A simplified diagram showing construction of a crystalline silicone (c-Si) photovoltaic cell helps to better understand the PV technology.  Crystalline silicon is the most widely used material for PV cell fabrication. An n-type dopant is diffused into a p-type silicon wafer to create the p-n junction. Depending on the process, it might start out with an n-type waver, followed by a p-type layer.

The n-type and p-type layers are placed side by side on the silicon wafer. Some excess electrons from the n-type layer move into the p-type layer so holes remain in their place. This can be described as holes moving from the p-layer into the n-layer. These electrons and holes create an electric field in the junction area of the semiconductor.

Not every photon frees an electron, and not all the potential electric power is necessarily collected. The term, “solar cell energy conversion efficiency,” defines the percentage of power converted from absorbed sunlight to electric power, which is delivered to the load. That is: Input light irradiance, E, is the amount of solar light power divided by surface area of the PV cell. The maximum electric power, Pm, is generated by the cell at the point of maximum irradiance, which for sun-tracking systems occurs at what is called “solar noon.” In PV lingo this solar noon is not necessarily12:00 PM, but the mid-time between sunrise and sunset.

The U.S. Department of Energy estimates that the efficiency of commercial PV power systems available today is in a range of 7% to 17%.  The main reason for these low numbers is that photons comprising only a small part of the solar spectrum (0.3 to 0.6 µm, which have energy greater than the solar cell band gap) can produce free electrons.

Thin film is the preferred choice for fabricating cells. Thin film technology offers one of the lowest production costs when the thin-film cell base is made of steel, glass, or a polymer instead of silicon. The active cell material is built 1 to 10 µm thick by depositing several layers of extremely thin film.

However, this design also has somewhat lower efficiency, meaning that a larger size PV cell is needed to generate the same amount of electric power as a smaller size, high-efficiency cell.

Efficiency can be also increased by fabricating PV cells from two or more different cells, one on top of another. The cells in the stack have junctions of different band gaps. This construction is known as a multijunction solar cell. For example, in a three-cell multijunction design, the top cell has the highest band gap and absorbs the photons with higher energy level.  The cell below it has a lower band gap and absorbs photons that pass through the top cell.  The third cell has even lower band gap energy and absorbs the photons that pass through the two cells above it.  Thus, more photons are absorbed compared to a single cell design, and the efficiency is much greater, approximately 35%.

The size of a single PV cell ranges from about 1 to 10 cm across and, other than in small calculators, using just a single cell is not practical because the voltage and current out of one cell are too low for most other applications. Depending on the technology, a typical PV cell voltage is approximately 0.5V with a maximum power of 2 W.

Most applications require several cells interconnected into a PV module, frequently called a PV panel. Mechanically, all cells in a module are supported by a frame. Usually, modules produce a certain voltage with current proportional to the amount of light falling onto the module.  The most common solar module output voltage is 12V. To increase the voltage, current, or both, the modules are connected in series and/or parallel. These assemblies are called solar arrays.

PV Power systems
There are two types of solar power systems: off-grid or stand-alone and grid-connected. The light-to-electric energy conversion is about the same, but the electric energy storage and distribution are accompished differently. Individual PV cells are usually connected in modules where cells are attached to a frame, interconnected, and protected from the environment. To increase the total voltage, current, or both, PV modules are connected into arrays.

In a typical off-grid or stand-alone solar power generating system the PV array is connected to a charge/discharge controller that directs and controls solar-generated dc electric current to charge the storage battery. Lead-acid batteries are typically used for energy storage, and depending on how many batteries are connected in series the nominal battery voltage is 12, 24, or 48 Volts.

In off-grid or stand-alone solar power systems, a charge/discharge controller uses electric current generated by the PV array to charge the storage battery. The dc/ac inverter draws power from the battery to produce 110Vac 60Hz electric current and power lights, machinery, and appliances.

Typical controllers include temperature compensation, provide complete isolation between the control and power circuits, and have light-detection driven on/off switching and programmable timers. The battery side includes overcharging and reverse-polarity protection, low battery voltage cut-off, and fault warning. On the load side, controllers typically include output overload, over-voltage, reverse-polarity, and short-circuit protection. The solar array is protected against reverse polarity and reverse current flow at night.

The controller also regulates the battery discharge into the load. The battery load of a stand-alone system is a dc-to-ac Inverter, which converts 12, 24, or 48 V dc current into 110 V ac, 60Hz or 220V ac, 50Hz alternating current. Inverters with operating efficiency of up to 90%, tight output voltage tolerances, and low harmonic distortion are very common. They typically provide input reverse polarity, over-voltage, and under-voltage protection. The output incorporates overload, short-circuit, and thermal shutdown protection.

A typical grid-connected solar power system includes a solar array and a grid-connected inverter.  This system does not require a storage battery, but instead converts the dc current generated by the solar array directly into high voltage alternating current that is fed into the electric utility grid. Depending on the country and standard power utility grid, the inverter output frequency is 50 or 60 Hz, and the voltage is in the range between 180 and 440 VAC.

Similar to any power-line type of solar power equipment, manufacturers typically obtain certification from one of the testing service providers. Underwriters Laboratories Inc. (UL), Institute of Electrical and Electronics Engineers (IEEE), and International Electrotechnical Commission (IEC) are the three main agencies offering solar power equipment certification. They are considered authorities in this field and their certificates are widely recognized. Grid-connected dc/ac inverters convert low-voltage dc current generated by the PV cell to a high-voltage ac current that is fed into the electric utility power grid.

Solar Power Equipment Payback Time
China, Germany, Japan, Taiwan, and the USA are today’s leaders in solar cell manufacturing, but many other countries are actively pursuing this technology. It has been noted that solar power equipment manufacturing and installation rapidly accelerates in countries with significant government R&D funding, and strong tariff, tax credits, and other incentive-type legislation.

One major objective of each of these countries is to lower the cost of electric energy. Solar power equipment manufacturers, universities, and government agencies can do this by working to improve PV and CSP efficiency, increase power ratings, and reduce the cost of manufacturing. And the main goal of ongoing PV research everywhere is to increase solar-cell efficiency.

Of course, the ultimate goal is to lower the total cost of producing solar electric power to make it more attractive to the consumer than fossil electric power. This total cost depends on the cost of solar power equipment materials and manufacturing, cost of installation and maintenance, and finally the amount of produced electric power directly linked to solar cell efficiency.

Now, how can we calculate the total cost? We use what is called, “Energy Payback Time” (EPBT), but, unfortunately, this term is often misunderstood. For solar power equipment, EPBT means the length of time the system operates and produces electric energy equal to the total amount of energy required to produce all of its own system components. The U.S. Department of Energy estimates that the EPBT for a typical solar module made of a single-crystal silicon cells is 2.7 years.

Obviously, this number must drop considerably, and soon.

CSP systems use large parabolic mirrors or lenses to concentrate solar light on a receiver, which is filled with working or heat transfer fluid, such as oil, suspended at the focal point. Concentrated sunlight heats the oil and forces it flow into a heat exchanger or solar steam generator. It then heats another fluid (water) and converts it to steam.  The steam drives a turbine generator that produces electricity and at the same time drives the pumps. After leaving the turbine, the steam cools in the condenser and returns to water, which is fed again into the heat exchanger–and the cycle repeats.

Only three types of CSP systems have proved practical so far: parabolic dish, solar trough, and solar power tower. In the first system, a round parabolic dish reflector positions the receiver at its focal point. The dish turns in two axes to track the sun from morning until evening, which provides the highest efficiency among the three systems.

The trough system is very similar in operation, but instead of the dish reflector, it uses a series of long, linear parabolic reflectors. The receiver tube is suspended along the focal line of the trough. The troughs also follow the sun, but can turn only about one axis. So, its sun-tracking efficiency is not as good as the dish design. Nevertheless, trough systems are the most cost effective of the three and have the largest number of installations.

The receiver of the solar power tower is positioned at the top of the central tower surrounded by an array of reflectors, also called heliostats, installed at ground level. Each reflector tracks the sun during the day and keeps the beam of concentrated light on the receiver. Tower systems have high efficiency and superior energy storage capabilities.