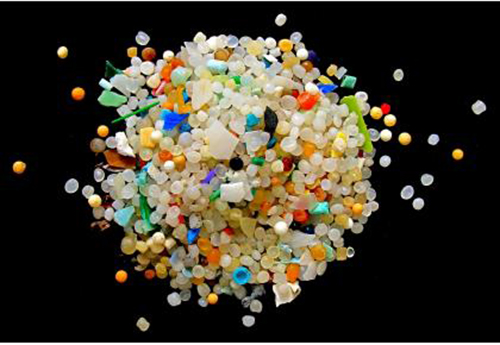 Marine circulation and weather conditions greatly affect microplastic aggregation and movement. Microplastics, which are particles measuring less than 5 mm, are of increasing concern. They not only become more relevant as other plastic marine litter breaks down into tiny particles, they also interact with species in a range of marine habitats. A study by Natalie Welden and Amy Lusher published in Integrated Environmental Assessment and Management, takes a look at how global climate change and the impact of changing ocean circulation affects the distribution of marine microplastic litter. It is part of a special invited section on microplastics.

Natalie Welden of Open University and lead author of the paper notes, “The ability to predict areas of plastic input and deposition would enable the identification of at risk species, and it would allow for efforts to reduce and remove plastic debris at targeted locations. The current uncertainty as to the effects of global warming on our oceans is the greatest challenge in predicting the future patterns of plastic aggregation in relation to global circulation.”

Littering, landfill runoff and loss at sea are the main pathways through which plastics enter the ocean. It is estimated that plastic waste from coastal countries will increase nearly 20-fold by 2025. The density of the plastic determines if it remains in surface waters, becomes beached in coastal areas and estuaries, or sinks to deep-sea sediments. Further, weather conditions and marine circulation play a significant role in the distribution. For example, the circular systems of ocean currents, such as the Gulf Stream in the North Atlantic or the California Current in the Pacific, play a significant role in the movement of plastics from their point of release to remote areas where they can accumulate in central ocean regions called gyres. Unusual large amounts of marine debris have been found in these zones, such as the North Atlantic or Great Pacific garbage patches.

However, our oceans are currently undergoing a marked period of uncertainty brought about by global climate change. For example, ice melts in polar regions is predicted to have a range of effects on the distribution on marine plastics. As many swimmers know, it is easier to float in saltwater than a swimming pool. Reduction in the density of seawater at sites of freshwater input is expected to reduce the relative buoyancy of marine debris, increasing the rate at which plastics sink. Correspondingly, areas of high evaporation, due to the increase in temperature, will experience increased water densities, resulting in plastics persisting in the water column and surface waters.

“The hope is that future models of climate-ocean feedback are producing more accurate predictions of circulation patterns,” said Welden. “This is vital in forecasting and mitigating potential microplastic hotspots and ‘garbage patches’.”