President Barack Obama is laying out a blueprint for addressing unsolved problems with his signature health law, including a renewed call for a “public option” to let Americans buy insurance from the government. Obama’s assessment of the Affordable Care Act comes in an eight-page article in the Journal of the American Medical Association. The article debuted Monday on the journal’s website, and Obama plans to echo the themes in public events and speeches in the coming weeks.

Replete with academic-style citations, the article is largely a self-congratulatory look at what Obama sees as the accomplishments of his law: millions of Americans who have gained coverage, slower growth in overall health costs, and better coordination of care to improve quality. Yet it’s also a memo for Democrat Hillary Clinton on how she can build on his legacy if elected president. Obama’s latest ideas are likely to be dismissed by Republicans, who remain committed to repealing the health care law. In polls, “Obamacare” continues to divide the public.

Despite progress under his administration, “too many Americans still strain to pay for their physician visits and prescriptions, cover their deductibles or pay their monthly insurance bills,” Obama writes. Others struggle to navigate the “bewildering” health system. Too many still lack insurance coverage, he adds. 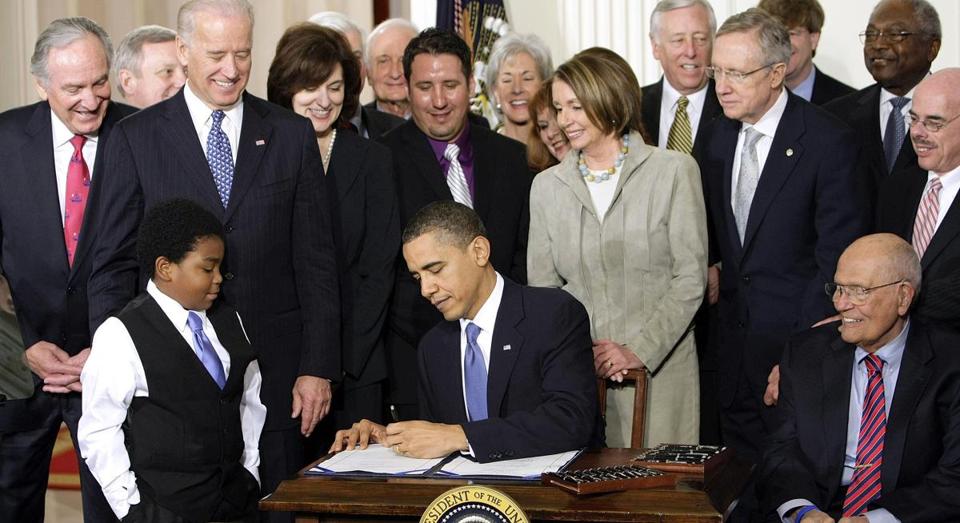 Obama urges lawmakers to “revisit” the public plan, especially in areas of the country where there is little or no competition among private insurers participating in HealthCare.gov and state-run marketplaces created by the law. Many experts consider that at least three insurers are needed for a competitive market. But many small towns and rural areas have only one option. The problem is growing, as some commercial insurers scale back their participation in the health law’s markets, and more than a dozen nonprofit insurance co-ops have collapsed.

Kristie Canegallo, White House deputy chief of staff, says Obama will keep making his case for a public option to voters, but he doesn’t plan to send the Republican-run Congress new legislation to implement it. “This Congress is not going to act on a proposal like that,” Canegallo says.

During hard-fought negotiations in Congress before Obama signed the law in 2010, liberals pushed vehemently for a public option, in which Americans could opt for a government-run plan similar to Medicare. It was scuttled to secure enough votes from moderate Democrats to pass the bill.

Now, Obama aims to influence the debate about health care in the presidential election.

A public health insurance option would stop well-short of the government-run system that Vermont Sen. Bernie Sanders turned into a rallying cry. But some liberals believe it could be a stepping stone. Clinton has said if elected she’d work with interested governors to implement state-based versions of the public option.

Republican Donald Trump has said he’d end “Obamacare” and replace it with something better, though he’s been vague on the specifics. A recent nonpartisan analysis found that the plan Trump has outlined would make 18 million people uninsured.

In a counterpoint to Obama’s article published Monday by the same medical journal, a conservative policy expert called for an overhaul of the health care law. Stuart Butler of the Brookings Institution think tank doea not advocate repeal, but says the system is too complicated for many consumers, and subsidies for moderate-income families are inadequate. Butler says states should take advantage of a provision in the law that would allow them to redesign coverage starting in 2017.

“Core parts of the ACA need to be reassessed and revised,” writes Butler.

The health care law has been the major driver in reducing the nation’s uninsured rate to about 9 percent, a historic low. It provides subsidized private health insurance to people without workplace coverage across the country, and offers a Medicaid expansion that states can use to cover more low-income residents.

In the article, Obama repeatedly blames “hyperpartisanship” for preventing more progress, pointing out that the 19 states that have refused to expand Medicaid under his law haven’t done as well reducing the number of uninsured residents. He urges more of those mostly GOP-run states to accept the Medicaid expansion.

Obama also urges lawmakers to make the subsidies for private health insurance more generous. And citing the high cost of prescriptions, he calls for new legislation to force drug companies to disclose more information about their production costs, as well as to give the government authority to negotiate prices for some high-priced medications. Those proposals basically align with ideas that Clinton has already put forward.