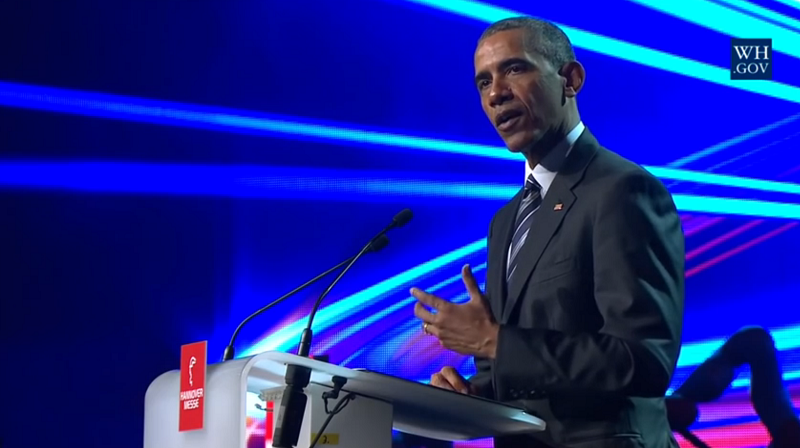 President Barack Obama talked about United States manufacturing and next-generation technology at the opening ceremony of the Hannover Messe trade show on Monday, as part of the United States’ partnership with the German conference.

This marks the first time a United States president has attended Hannover Messe, as well as the largest number of American companies at the international show. More than 350 companies from the United States attended the show, which officially began on Sunday, April 24.

Obama addressed the top priorities the United States government has in the technology sector, including “next-generation manufacturing,” 3D printing, and electric vehicles. (That includes a 3D printed electric car – Obama joked that if he took a ride in it with German Chancellor Angela Merkel, he would have to ask the secret service.)

Obama encouraged Germany and the United States to continue trade through the European Union and, expectedly, emphasized international cooperation. He also pointed out barriers to international trade, including tariffs on exports and incompatible regulations or standards. Obama’s push for “high standards for workers and consumers, and the environment” got a lot of applause.

He also spoke in support of the Transatlantic Trade and Investment Partnership (TPP), the much-debated proposal for a stronger trade agreement between the United States and the 28 countries that make up the European Union, as an effort to standardize industry regulations.

Critics suggest that the TPP would lead to lowered standards, including decreased environmental regulation.

Hannover Messe will continue until Friday, April 29. Other technologies presented at the show include a solar platform designed to float on the ocean and gecko-foot robotic grippers.