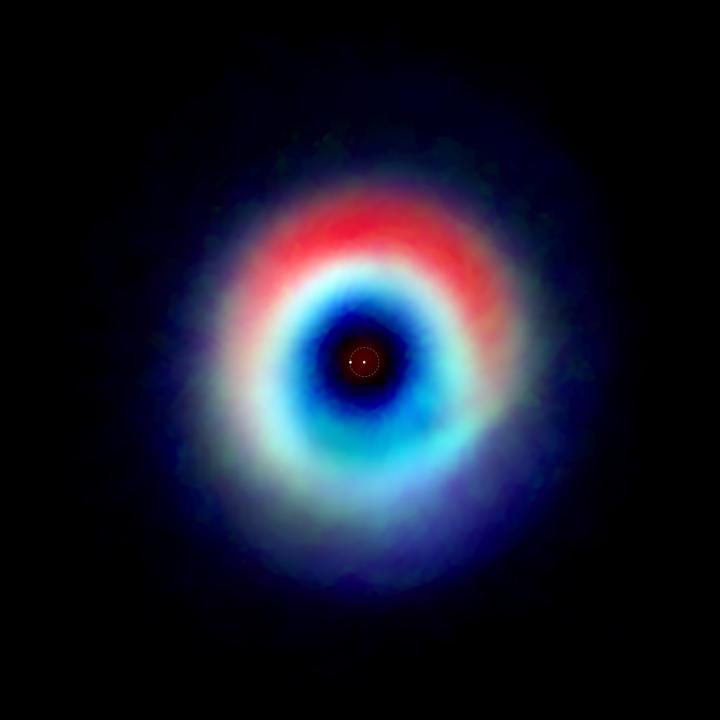 A composite image of the HD 142527 binary star system from data captured by the Atacama Large Millimeter/submillimeter Array shows a distinctive arc of dust (red) and a ring of carbon monoxide (blue and green). The red arc is free of gas, suggesting the carbon monoxide has “frozen out,” forming a layer of frost on the dust grains in that region. Astronomers speculate this frost provides a boost to planet formation. The two dots in the center represent the two stars in the system. CREDIT Andrea Isella/Rice University; B. Saxton/NRAO/AUI/NSF; ALMA/NRAO/ESO/NAOJ

A Rice University researcher will discuss images that may show the formation of a planet — or a planetary system — around a distant binary star at the annual meeting of the American Association for the Advancement of Science in Washington, D.C., today.

Andrea Isella, an assistant professor of physics and astronomy, will present images of the binary system known as HD 142527, captured by the new Atacama Large Millimeter/submillimeter Array (ALMA) radio telescope in Chile.

Isella said the binary system has long been known to harbor a planet-forming corona of dust and gas, but ALMA images are providing more detail than ever and allowing for better analysis of the system’s contents and mechanics.

Isella studies the formation of planetary systems. In his talk, he will discuss the importance of mapping them and why exoplanetary systems – those outside the solar system – “exhibit such an impressive variety of properties.”

The binary star is approximately 450 light years away in the Scorpius-Centaurus association, a cluster of young stars containing objects similar to HL Tau, the subject of the first high-resolution images taken as part of ALMA’s long-baseline campaign in 2014. (Long-baseline interferometry allows multiple antennas to act as one. The size of the telescope is determined by the space between the antennas. During the long-baseline campaign, ALMA antennas achieved a maximum separation of 10 miles.) Images of HL Tau revealed ring structures in the dust and gas cloud around the star, an indication that planet formation is under way.

Images of HD 142527 show a broad ring around the double star. Most of it consists of gases, including isotopologues of carbon monoxide, but a huge arc around nearly a third of the star system consists of dust and ice, Isella said.

“Where the red in the image is brightest, the density of the dust peaks,” he said. “And where we find a dense clump of dust, the carbon monoxide molecules disappear.”

Isella and his colleagues suspect gas molecules freeze in the dust. “The temperature is so low that the gas turns into ice and sticks to the grains,” he said. “This is important for planet formation. The solid dust needs to stick together to form a bigger body that will eventually attract more rock and gas gravitationally.

He said the crescent-shaped dust cloud may be the result of gravitational forces unique to binary stars.

Until recent years, Isella said, astronomers thought it unlikely that planets could form and survive around binary systems. “The theory was that they could hardly find stable orbits,” he said. “Most of the planets would either be scattered or fall into the stars. Then people started to discover planets around binary stars, so clearly they had to tweak the theory. The observation of systems like HD 142527 yields a fantastic opportunity to study the physical processes that regulate the formation of planets around binary systems.”

HD 142527 will be the subject of an upcoming paper led by Rice postdoctoral fellow Yann Boehler, who is working in Isella’s group.

Isella expects many revelations from the flood of high-resolution data provided by ALMA and other new radio telescopes, which capture images of stellar objects obscured by gas and dust that cannot be seen by optical means.

Isella and his colleagues also plan to discuss the early HL Tau images at the AAAS gathering. “We’ve been looking at these objects for at least 20 years,” he said. “There are between a few hundred and a few thousand they can look at again with ALMA. They are starting with the brightest ones, because they are the easiest to observe.

“HL Tau was the brightest object of this type in the sky, and it has been well-observed, so they used it to make sure the instrument was working OK. But the rings they found in the system were completely unexpected.

“That’s the beauty of the Atacama array,” he said. “Every time you get new data, it’s like opening a Christmas present. You don’t know what’s inside.”

Isella will speak as part of the “Planet Formation Seen With Radio Eyes” session at AAAS at 8 a.m. EST Feb. 13.