While most bike enthusiasts have come to know Vance & Hines for its exhaust systems, the riding community also knows the company for its Fuelpak FP3. This aftermarket motorcycle part is the most capable and cost-effective fuel management system currently available for Delphi-equipped Harley-Davidson motorcycles.

“This modification can impact fuel economy and performance as it alters the air/fuel ratio, causing the bike to run much leaner. Our classic Fuelpak devices solved those issues. With the new FP3, we added functionality like increased horsepower, quicker throttle response, and increased fuel efficiency,” said Larry Hinds, manufacturing manager at Vance & Hines.

As the current generation of fuel management systems neared end of product life, demand grew for a solution with exciting new feature sets. The challenge for Vance & Hines then became how to optimize fuel economy and upgrade the user interface.

Vance & Hines had the idea of linking the FP3 with the user’s smartphone over Bluetooth to provide a more dynamic interface. 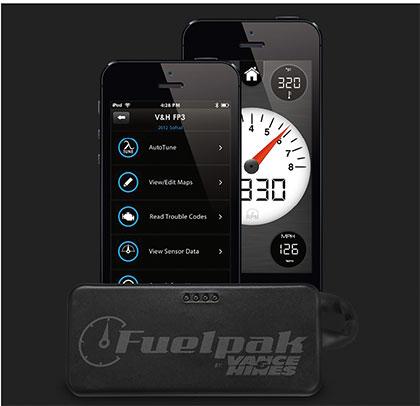 “The smartphone integration gave us the ability to not only fix performance issues, but also enhance the rider experience,” said Hinds. “That meant the FP3 would use Bluetooth technology and more robust, complex PCBs.”

“Even though the FP3 is a fairly high volume product, we use a just-in-time (JIT) style of manufacturing,” he added. This production method called Kanban, or “blank card,” requires a PCB supplier to commit to a predictable production turnaround. “We set aside six weeks of board inventory and put a card on it,” said Hinds. “When we crack open that box, it signals us to place a PCB order that can easily be delivered within six weeks.” For this, the Vance & Hines design team chose Sunstone.

In addition to collaborative prototyping services and capacity for high volume PCB production, communication lines were kept open at all times. “We don’t feel like we’re sending our orders into a black hole,” said Hinds. “There’s someone on the other end who cares.”

“Instead of robotically manufacturing boards, Sunstone had a thought process behind their work,” he continued. That process in its simplest form is taking every measure necessary to ensure quality before production begins. Anything that can interfere with quality or performance raises a red flag and a proactive call to Hinds himself.

For example: “A new employee accidentally sent over some specs that called for a tin-lead finish, rather than the silver RoHS we normally use,” he said. That anomaly raised the alarm at Sunstone, who contacted Hinds to confirm the unusual order. It had been made in error. That email saved an entire production run.

The commitment is to build the right board the right way, every time. No exceptions. For Hinds, this meant focusing on expanding the FP3 feature sets, not worrying about supporting basic functions.