For the first time ever, a cloud of ultra-cold atoms has been successfully created in space on board of a sounding rocket. The MAIUS mission demonstrates that quantum optical sensors can be operated even in harsh environments like space – a prerequisite for finding answers to the most challenging questions of fundamental physics and an important innovation driver for everyday applications.

According to Albert Einstein’s Equivalence Principle, all bodies are accelerated at the same rate by the Earth’s gravity, regardless of their properties. This principle applies to stones, feathers, and atoms alike. Under conditions of microgravity, very long and precise measurements can be carried out to determine whether different types of atoms actually “fall equally fast” in the gravitational field of the Earth – or if we have to revise our understanding of the universe.

As part of a national consortium, Ferdinand-Braun-Institut, Leibniz-Institut fuer Hoechstfrequenztechnik (FBH) and Humboldt-Universitaet zu Berlin (HU) now made a historical step towards testing the Equivalence Principle in the microcosm of quantum objects. In the MAIUS mission launched on January 23, 2017 a cloud of nano-Kelvin cold rubidium atoms has been generated in space for the first time ever. This cloud was cooled down with laser light and radio frequency electrical fields so that the atoms finally formed a single quantum object, a Bose-Einstein condensate (BEC).

More than 20 years after the groundbreaking results of the Nobel laureates Cornell, Ketterle, and Wieman on ultra-cold atoms, preliminary evaluation of the sounding rocket mission data indicates that such experiments can also be carried out under the harsh conditions of space operation – back in 1995, living room-sized setups in a special laboratory environment were required. Today’s quantum optical sensor is as small as a freezer and remains fully operational even after experiencing huge mechanical and thermal stress caused by the rocket launch. This groundbreaking mission is a pathfinder for applications of quantum sensors in space. In the future, scientists expect to use quantum sensor technology to cope with one of the biggest challenges of modern physics: the unification of gravitation with the other fundamental interactions (strong, weak, and electro-magnetic force) in a single consistent theory. At the same time, these experiments are drivers of innovation for a broad range of applications, from inertial (non-GPS referenced) navigation to space-borne geodesy used to determine the Earth’s shape. 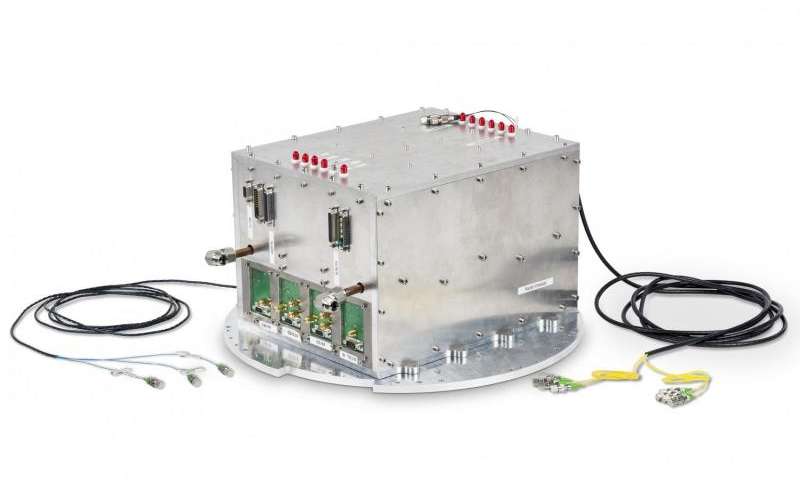 MAIUS laser system used to successfully create a Bose-Einstein condensate for the first time in space. It is about as big as a shoe box with a mass of 27 kg. FBH’s laser modules are integrated on the bottom side of the heat sink, the top side houses modules for further processing of the light to be transferred to the main experiment. Credit: Humboldt-Universität zu Berlin

For this mission, the FBH has developed hybrid micro-integrated semiconductor laser modules that are suitable for application in space. These laser modules, together with optical and spectroscopic units provided by third partners, have been integrated and qualified by HU to provide the laser subsystem of the scientific payload. The results of this mission coordinated by Leibniz Universitaet Hannover do not only prove that quantum optical experiments with ultra-cold atoms are possible in space, but also give FBH and HU the opportunity to test their miniaturized laser system technology under real operating conditions. The results will also be used to prepare future missions which are already scheduled for launch. MAIUS, however, is not the first sounding rocket test for both institutions’ laser technology in space; the technology has already been successfully tested in April 2015 and January 2016 on board of two sounding rockets within the FOKUS and KALEXUS experiments.

The MAIUS mission is supported by the German Space Agency (DLR) with funds provided by the Federal Ministry of Economic Affairs and Energy and tests all key technologies of a space-borne quantum optical sensor on a sounding rocket: vacuum chamber, laser system, electronics, and software. MAIUS constitutes a historical milestone for future missions in space that will take advantage of the full potential of quantum technology. For the first time world-wide, a Bose-Einstein condensate (BEC) based on rubidium atoms has been created on board of a sounding rocket and has been used to investigate atom interferometry in space. Quantum optical sensors based on BECs enable high-precision measurements of accelerations and rotations using laser pulses which provide a reference for precise determination of the positions of the atomic cloud.

The compact and robust diode laser system for laser cooling and atom interferometry with ultra-cold rubidium atoms has been developed under the leadership of the Optical Metrology Group at HU. This system is required for the operation of the MAIUS experiment and consists of four diode laser modules that have been developed by FBH as hybrid-integrated master-oscillator power-amplifier laser modules. The master laser is a monolithic distributed feedback (DFB) laser which is frequency-stabilized to the frequency of an optical transition in rubidium and generates spectrally pure and highly stable (~ 1 MHz linewidth) optical radiation with low output power at 780 nm wavelength. The three other laser modules feature a tapered amplifier chip with a ridge waveguide input section. These tapered amplifier chips boost the optical output power of a DFB laser to beyond 1 W without any loss of spectral stability. Two additional redundancy modules were integrated. Free space acousto-optical modulators and optical components are used to generate the laser pulses according to the experimental sequence. The laser light pulses are finally transferred to the experimental chamber by optical fibers.