Once it has discovered a new drug, a drug manufacturer has a limited amount of time to reap the rewards of its invention before its patent expires and generic products enter the market. Thus, speed is important.

Traditionally, drug manufacturers have built inflexible, cost-prohibitive production facilities that take three to seven years to complete and even longer to validate for production. With the advent of single use technologies and process improvements, though, a paradigm shift is occurring, making such large scale facilities a thing of the past. Instead, modular, scalable, flexible manufacturing solutions are the industry’s goal. G-CON, a builder of biotherapeutics manufacturing facilities, created the POD platform to respond to this need. 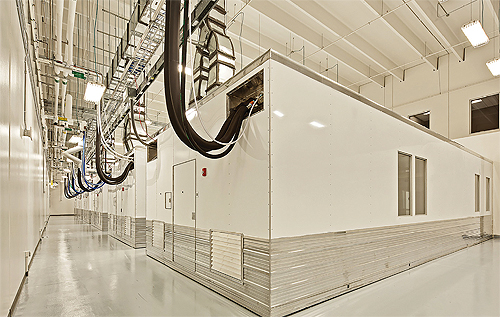 Vaccines, for example, for large populations typically take 10 to 17 years to move through the clinic to licensure. But for critical situations like pandemics and biological attacks, years of development must collapse into months or even weeks. After the H1N1 pandemic, the Defense Advanced Research Projects Agency (DARPA), a division of the Department of Defense, awarded G-CON a grant to address this concern. Within 21 months of signing the contract, G-CON had to produce a plant-produced recombinant protein for an influenza vaccine at a rate of 100 million doses per year.

G-CON had to develop a vaccine three times faster than conventional systems, scale the process to commercial capacity, and design and construct the facility seven times faster, at 10% of the usual cost. All the while, the team had to ensure production occurred under stringent manufacturing guidelines.

G-CON chose to partner with the Global Solutions team at Rockwell Automation. The two teams collaborated to develop a severely compressed schedule that called for many steps to occur simultaneously. The POD concept was key to making this tight schedule a reality – while the shell of the facility was under construction, the downstream-process PODs were built and commissioned at G-CON’s neighboring manufacturing facility.

PODs are autonomous, self-contained clean rooms that provide as much as 768-ft2 of clean room space each – complete with their own control, ventilation, fire suppression and data-management systems. The host facility need only provide chilled water, electricity and moderate air conditioning. Each POD houses specific unit processes; when combined, they yield an entire process system to purify and deliver biotherapeutics. Each zone operates independently, but is part of the greater structure. PODs are equipped with Allen-Bradley ControlLogix programmable automation controllers (PACs). The device controls the POD environment and is an integral part of the POD’s autonomous information management package. Data from PODs and upstream processes are managed by LAN based FactoryTalk software. As technology evolves, the controller adapts, interfacing with new technology that is added, without having to re-validate the core firmware, saving time and money.

The PODs leverage an EtherNet/IP industrial network to communicate between various process equipment within the POD. EtherNet/IP provides the industrial backbone for POD process control and data management as a single network environment, and allows seamless integration for “clusters” of PODs. This network topology is essential to implementing a quality Manufacturing Executions System (MES).

G-CON also chose FactoryTalk VantagePoint software to access data sources throughout the POD. The application collects and aggregates production data and compiles it into web-based reports to give G-CON real-time data of the process operations. If the temperature is too high, if a fan fails, or if there is an interruption in the purification process, the FactoryTalk applications notify G-CON personnel so that the issue can be addressed immediately. But for G-CON, perhaps the most important aspect that FactoryTalk software provides is data management.
On March 22, 2011, POD-bearing trucks backed into the loading docks of G-CON’s 145,000-ft2 facility in Bryan, Texas. After unloading the PODs, a team of six workers slid them into place and connected them to the larger facility’s water and power system.

In less than one year, the facility was ready to produce vaccines at the rate that DARPA required – within the project’s $60 million budget and 21-month operational deadline.