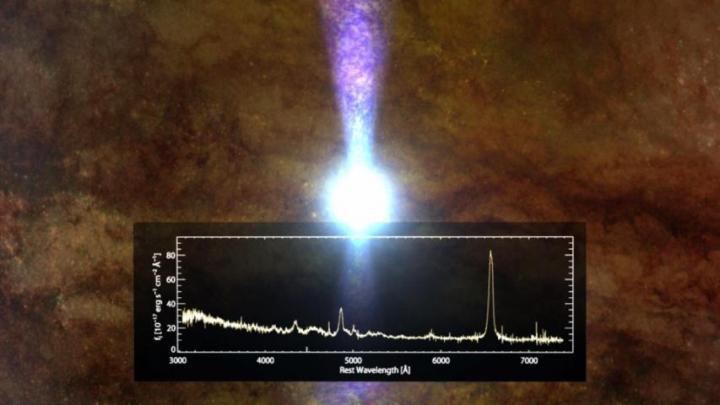 This is an artist’s conception of the “changing-look quasar” as is appared in early 2015. The glowing blue region shows the last of the gas being swallowed by central black hole as it shuts off. The spectrum is the previous one obtained by the SDSS in 2003. Credit Dana Berry / SkyWorks Digital, Inc.

Astronomers with the Sloan Digital Sky Survey (SDSS) announced that a distant quasar ran out of gas.

Their conclusions, reported Jan. 8 at the American Astronomical Society meeting in Kissimmee, Florida, clarify why quasar SDSS J1011+5442 changed so dramatically in the handful of years between observations.

“We are used to thinking of the sky as unchanging,” said University of Washington astronomy professor Scott Anderson, who is principal investigator of the SDSS’s Time-Domain Spectroscopic Survey. “The SDSS gives us a great opportunity to see that change as it happens.”

Quasars are the compact area at the center of large galaxies, usually surrounding a massive black hole. The black hole at the center of J1011+5442, for example, is some 50 million times more massive than our sun. As the black hole gobbles up superheated gas, it emits vast amounts of light and radio waves. When SDSS astronomers made their first observations of J1011+5442 in 2003, they measured the spectrum of the quasar, which let them understand the properties of the gas being swallowed by the black hole. In particular, the prominent “hydrogen-alpha” line in the spectrum revealed how much gas was falling into the central black hole.

The SDSS measured another spectrum for this quasar in early 2015, and noticed a huge decrease between 2003 and 2015. The team made use of additional observations by other telescopes over those 12 years to narrow down the period of change.

“The difference was stunning and unprecedented,” said UW astronomy graduate student John Ruan, a member of the research team. “The hydrogen-alpha emission dropped by a factor of 50 in less than 12 years, and the quasar now looks like a normal galaxy.”

The change was so great that throughout the SDSS collaboration and astronomy community, the quasar became known as a “changing-look quasar.” The black hole is still there, of course, but over the past 10 years, it appears to have swallowed all the gas in its vicinity. With the gas fallen into the black hole, the SDSS team were unable to detect the spectroscopic signature of the quasar.

“This is the first time we’ve seen a quasar shut off this dramatically, this quickly,” said lead author Jessie Runnoe, a postdoctoral researcher at Pennsylvania State University.

Before Runnoe, Ruan and their colleagues could come to this conclusion, they had to rule out two other possibilities. A thick layer of dust could have passed through the host galaxy, obscuring their view of the black hole at its center. But, they concluded that there is no way that any dust cloud could have moved fast enough to cause a 50-fold drop in brightness in just two years. Another possibility is that the bright quasar in 2003 was just a temporary flare caused by the black hole ripping apart a nearby star. While this possibility has been invoked in similar cases, it cannot to explain the fact that the changing-look quasar had been shining for many years before it turned off.

The team’s conclusion is that the quasar has used up all the glowing-hot gas in its immediate vicinity, leading to a rapid drop in brightness.

“Essentially, it has run out of food, at least for the moment,” says Runnoe. “We were fortunate to catch it before and after.”

The changing-look quasar is the first major discovery reported for the Time-Domain Spectroscopic Survey, one component of SDSS’s fourth phase, which will continue for the next several years.

“We found this quasar because we went back to study thousands of quasars seen before,” said Anderson. “This discovery was only possible because the SDSS is so deep and has continued so long.”