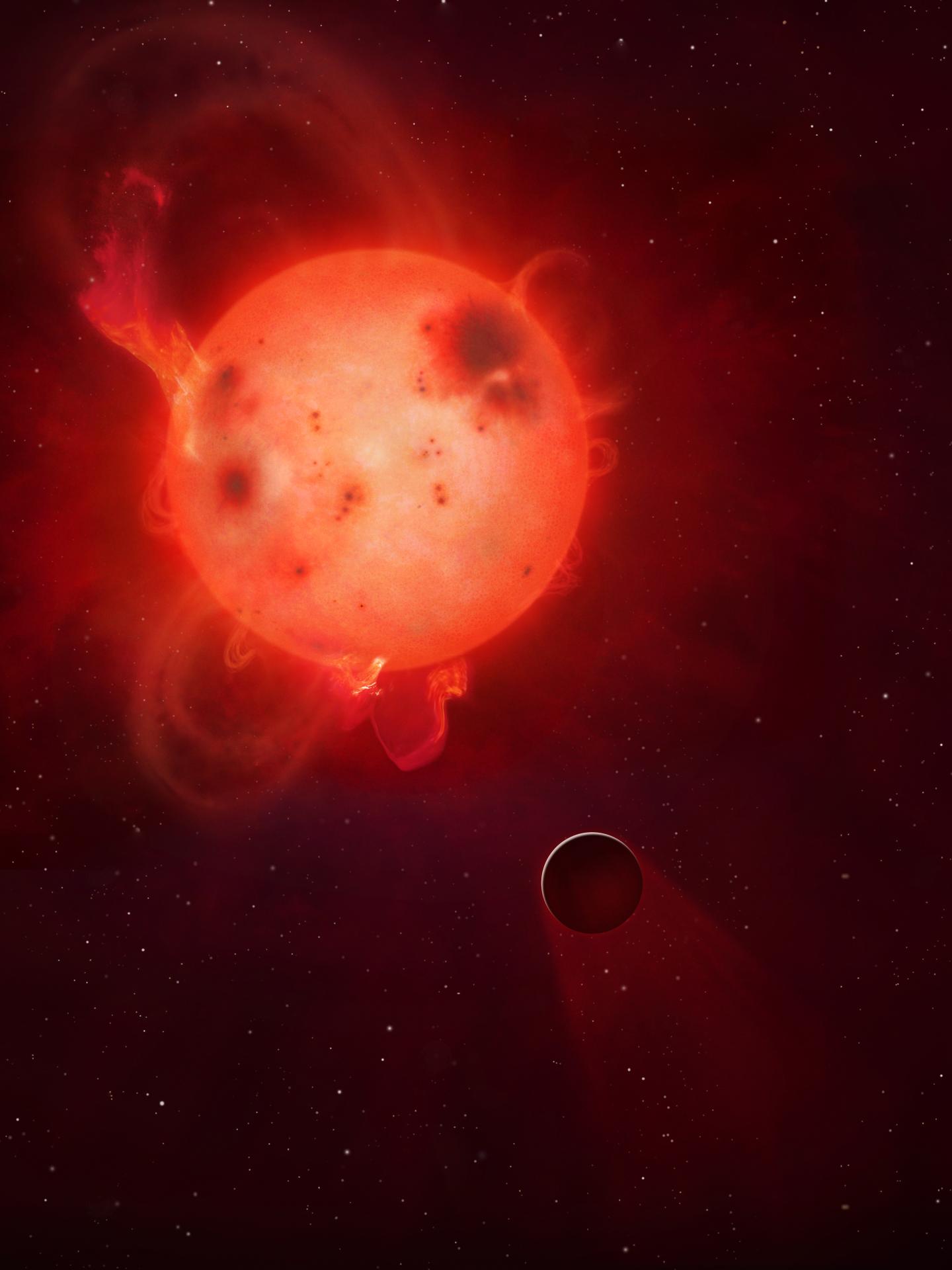 The planet Kepler-438b is shown here in front of its violent parent star. It is regularly irradiated by huge flares of radiation, which could render the planet uninhabitable. Here the planet’s atmosphere is shown being stripped away. Credit With credit to Mark A Garlick/University of Warwick

The most Earth-like planet could have been made uninhabitable by vast quantities of radiation, new research led by the University of Warwick research has found.

The atmosphere of the planet, Kepler-438b, is thought to have been stripped away as a result of radiation emitted from a superflaring Red Dwarf star, Kepler-438.

Regularly occurring every few hundred days, the superflares are approximately ten times more powerful than those ever recorded on the Sun and equivalent to the same energy as 100 billion megatons of TNT.

While superflares themselves are unlikely to have a significant impact on Kepler-438b’s atmosphere, a dangerous phenomenon associated with powerful flares, known as a coronal mass ejection (CME), has the potential to strip away any atmosphere and render it uninhabitable.

The planet Kepler-438b, to date the exoplanet with the highest recorded Earth Similarity Index, is both similar in size and temperature to the Earth but is in closer proximity to the Red Dwarf than the Earth is to the Sun.

“Unlike the Earth’s relatively quiet sun, Kepler-438 emits strong flares every few hundred days, each one stronger than the most powerful recorded flare on the Sun. It is likely that these flares are associated with coronal mass ejections, which could have serious damaging effects on the habitability of the planet.

“If the planet, Kepler-438b, has a magnetic field like the Earth, it may be shielded from some of the effects. However, if it does not, or the flares are strong enough, it could have lost its atmosphere, be irradiated by extra dangerous radiation and be a much harsher place for life to exist”.

Discussing the impact of the superflares and radiation on the atmosphere of Kepler-438b, Chloe Pugh, of the University of Warwick’s Centre for Fusion, Space and Astrophysics, says:

“The presence of an atmosphere is essential for the development of life. While flares themselves are unlikely to have a significant impact on an atmosphere as a whole, there is another more dangerous phenomenon associated with powerful flares, known as a coronal mass ejection.

“Coronal mass ejections are where a huge amount of plasma is hurled outwards from the Sun, and there is no reason why they should not occur on other active stars as well. The likelihood of a coronal mass ejection occurring increases with the occurrence of powerful flares, and large coronal mass ejections have the potential to strip away any atmosphere that a close-in planet like Kepler-438b might have, rendering it uninhabitable. With little atmosphere, the planet would also be subject to harsh UV and X-ray radiation from the superflares, along with charged particle radiation, all of which are damaging to life”.