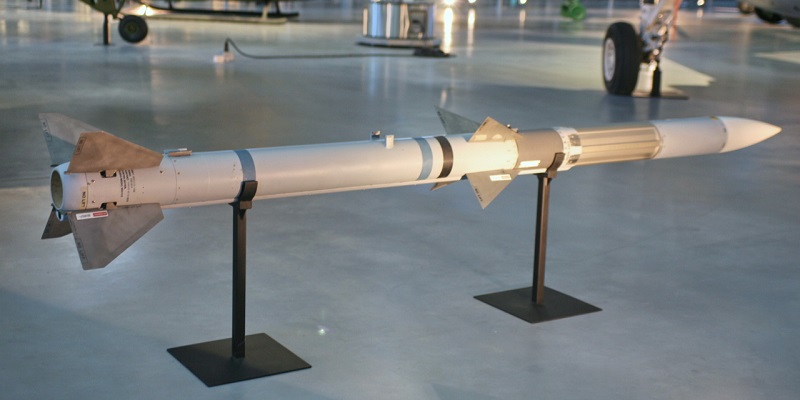 An Advanced Medium-Range Air-to-Air Missile, or AMRAAM, is displayed at the Steven F. Udvar-Hazy Center in Virginia in 2008. Raytheon will build more of the versatile weapon under a $573 million contract from the U.S. Air Force. (Image: Cliff)

Pacific Defense Solutions was awarded two Defense Logistics Agency contracts totaling more than $27.8 million for the development of electro-optical space situational awareness systems. The more lucrative of the two contracts, worth $17.9 million, is for the development of the systems and related components. The other contract is worth $9.9 million and is for the “research and development of technologies which are intended to advance satellite custody and characterization (imaging, detection, acquisition, and tracking) within the paradigm of low-cost space situation awareness,” the DoD said in the contract listing. Pacific Defense Solutions will conduct the work for both contracts in Kihei, Hawaii, and should finish all the labor by June 14, 2021.

Boeing was awarded an $896 million modification to an Army contract to remake 27 CH-47F Chinook helicopters and produce another 12 of the aircraft. The modification increases the value of the contract by about $30 million. The labor will be conducted in Ridley Township, Pa., and should be finished on Dec. 20, 2020.

Utah State University Research Foundation’s Space Dynamics Laboratory has been awarded a $49 million Air Force contract for research and development work aiding sensor creation, image processing, and data analysis. More than $3 million in fiscal 2015 and 2016 research, development, test, and evaluation funds are being assigned with the indefinite-delivery/indefinite-quantity contract award. The contract was a sole-source acquisition. The work will be conducted in North Logan, Utah, and should be finished by June 15, 2021.

Bell Helicopter is being awarded an $18.9 million modification to an Army contract to build three UH-1H military helicopters for the Lebanese government. Nearly all of the work will be conducted in Fort Worth, Texas. Bell will perform a small amount of work in Lebanon. The labor is scheduled to be completed March 14, 2017.

BAE Systems San Diego Ship Repair, General Dynamics NASSCO, and Continental Maritime of San Diego, are each being given contracts to improve Navy ships docked in San Diego. Each of the companies will receive one contract to improve military combat vessels and another contract to improve amphibious ships. The Navy received three bids for the firm-fixed-price, indefinite-delivery/indefinite-quantity contracts. The contracts have a total potential value of $1.3 billion that would be reached if various options are exercised. The work is estimated to be finished by April 21 if all of the options are picked up.

Raytheon has been given a $573 million modification to an Air Force contract to exercise an option for the continued build of Advanced Medium-Range Air-to-Air Missiles, or AMRAAM.

“AMRAAM is a versatile and proven weapon with operational flexibility in a wide variety of scenarios, including air-to-air and surface-launch engagements,” Raytheon says on its website. “In the surface launch role, AMRAAM is the baseline weapon on the National Advanced Surface-to-Air Missile System.”

More than $418 million in fiscal 2016 Navy and Air Force procurement funds are being assigned with the award. Raytheon will conduct the work in Tucson, Ariz., and is expected to be finished by Feb. 28, 2019.

Lockheed Martin Mission Systems Training will be given a $197.5 million modification to a Navy contract “for Aegis combat system engineering agent efforts for the design, development, integration, test, and delivery of computer program baselines and associated technology insertion hardware design support for the next advanced capability build,” the DoD said in the contract listing.

More than $82.1 million in fiscal 2015 and 2016 funding will be assigned with the contract, none of which will expire at the end of the 2016 fiscal year. Almost all of the work will be conducted in Moorestown, N.J., with the remaining work taking place in Manassas, Va. All of the labor is expected to be finished by October 2019.

Standard Aero, an aerospace company based in San Antonio, has been awarded a $43 million Air Force contract to upgrade the T56-A-15 Series 3.0 compressor and turbine modules for the LC-130H aircraft with T56-A-15A Series 3.5 upgrade kit hardware. The Air Force received two bids for the indefinite-delivery/indefinite-quantity contract. The work will be conducted in San Antonio, and is scheduled to be completed by March 15, 2019.

Lockheed Martin Missiles and Fire Control has been awarded a $14 million Air Force contract for research, analysis, engineering, and development work need to create specialized munitions. The Air Force received four bids for the indefinite-delivery/indefinite-quantity, cost-plus-fixed-fee contract. The work will be conducted in Grand Prairie, Texas, and should be finished by March 16, 2021.

Gulfstream Aerospace, an aircraft manufacturer based in Georgia, has been given a $91.9 million Navy contract for a Gulfstream G-550 Green aircraft featuring Airborne Early Warning air vehicle modifications. All of the firm-fixed-price contract funds will expire by the end of the 2016 fiscal year. The contract was not competitively obtained by the Navy. The labor will be conducted in Savannah, Ga., and should be finished in December 2018.

Raytheon Missiles System has been given a $9.9 million Air Force contract for research, analysis, engineering, and development work need to create specialized munitions. The Air Force received two bids for the indefinite-delivery/indefinite-quantity contract. The work will be conducted in Tucson, Ariz., and should be finished by March 17, 2021.