Speaking to the press, Mr. Karthik Ramalingam, a Senior Manager for product development of the company said, “Test tools that allow operators and service providers to generate real-world IP impairments are extremely useful to evaluate performance of networks. A few of the desired features in such test tools include, the ability to use test tools either in the lab environment or on live networks, capacity to control the test sequences and monitor results remotely, test automation, capability to change test parameters dynamically, and higher accuracy.”

He added, “Packet loss can include a straight-forward % of packets to be lost to simulate burst models where for an error event a certain number of packets will be disrupted. Latency or packet delay, and jitter, the variance in inter-packet delay, out-of-order packets, duplicate packets, and network congestion are other types of packet impairments expected to be seen.“

PacketExpert™ 1G and PacketExpert™ 10G are general all-purpose Ethernet test tools that can generate and analyse the incoming Ethernet traffic. These are available as either portable or as rackmount network appliances. The Multi-stream Traffic Generator and Analyzer application within PacketExpert™ is capable of generating multi-stream Ethernet traffic of varying packet length and also analyse the loopback traffic. The Record and Playback within PacketExpert™ is a wirespeed traffic generator and capture application that gives the user flexibility in recreating any kind of live network conditions – i.e., traffic captured on a live network (using either PacketScan™ or Wireshark®) can be easily recreated in the lab. The Record-only application captures packet and timestamped at the hardware level, thereby achieving nanosecond timestamp precision.

MAPS™ RTP HD and MAPS™ PacketLoad can emulate any or all of nodes in a network infrastructure to create an end-to-end call scenario from the user initiating a voice call or internet connection to the data server, responding to that request and all other necessary exchanges in between. These are available as special purpose rackmount network appliances with high-density NICs capable of high call intensity (20k+ calls/sec) and high volume of sustained calls (tens of thousands of simultaneous calls/platform).

With PCAP Replay option, any combination of traffic type is possible to create. You may pre-capture actual traffic to file (PCAP) and replay in lab environment to quickly pin-point issues using external protocol analysis tools such as PacketScan™ HD.”

For more specific and detailed testing, MAPS™ applications run script based call setup and tear down using different protocols. As part of this implementation, MAPS™ simulator can select specific messages in the protocol and use logical operators to insert data into or corrupt fields in the messages starting at the signalling link level. MAPS™ supports low level impairment capability by manipulating forward and backward call messages (on a per call basis) just before sending over transport.

Logical operators can be used to apply a specific impairment to a specific message over the system and impairments can also be set on the RTP path. This requires the user to know where in the frame of a particular message to insert the impairment or to corrupt.

GL’s  PacketCheck™  is a software based Ethernet tester with BERT and Throughput testing abilities. It is very easy to use as a general-purpose network performance analysis tool for 10Mbps, 100Mbps and 1Gbps LANs and WANs. The application generates multi stream Ethernet/IP/UDP traffic with on-demand bandwidth (up to 800 Mbps) and measures end to end performance such as Bit Error Rate, Total Packets, Packet loss, Out of Sequence Packets, and Erred Packets. Additional features include transmission of pre-recorded file traffic, GTP traffic simulation, impairment generation, Bursty and Fixed IFG (Inter Frame Gap) traffic generation mode, and Delay measurements, with provision to generate PRBS patterns or user-defined test patterns.” 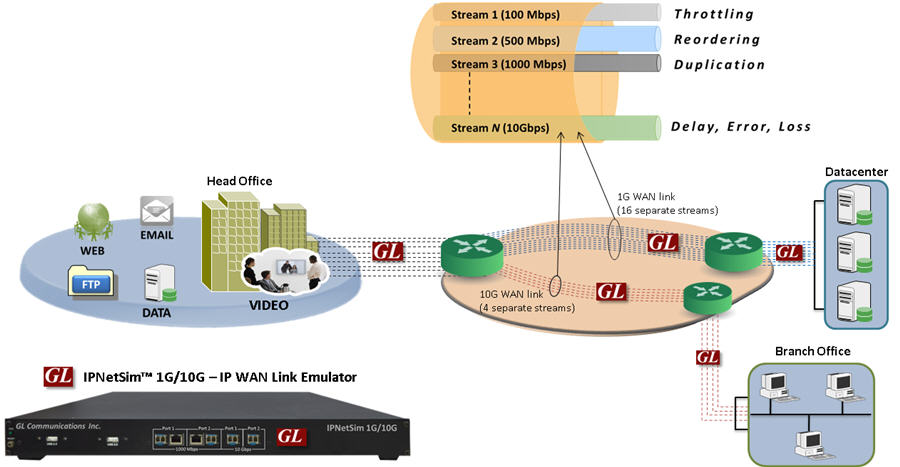