A red-hot voyage to the sun is going to bring us closer to our star than ever before.

NASA’s Parker Solar Probe will be the first spacecraft to “touch” the sun, hurtling through the sizzling solar atmosphere and coming within just 3.8 million miles (6 million kilometers) of the surface.

It’s designed to take solar punishment like never before, thanks to its revolutionary heat shield that’s capable of withstanding 2,500 degrees Fahrenheit (1,370 degrees Celsius).

Liftoff is set for the pre-dawn hours of Saturday for this first-of-its-kind mission to a star.

“The coolest, hottest mission, baby, that’s what it is,” said Nicola Fox, the project scientist at Johns Hopkins University.

Roughly the size of a small car, Parker will get nearly seven times closer to the sun than previous spacecraft. To snuggle up to the sun, it will fly past Venus seven times over seven years. Each flyby will provide an orbit-shaping gravity boost, drawing it ever closer to the sun and straight into the corona — the sun’s outermost atmosphere.

The closer, the better for figuring out why the corona is hundreds of times hotter than the sun’s surface. Another mystery scientists hope to solve: What drives the solar wind? That’s the steady, supersonic stream of charged particles blasting off the corona and into space in all directions.

“There are missions that are studying the solar wind, but we’re going to get to the birthplace,” Fox said.

Scientists expect the $1.5 billion mission to shed light not only on our own dynamic sun, but the billions of other yellow dwarf stars — and other types of stars — out there in the Milky Way and beyond. While granting us life, the sun also has the power to disrupt spacecraft in orbit, and communications and electronics on Earth.

“This is where we live,” said NASA solar astrophysicist Alex Young. “We have to understand and characterize this place that we’re traveling through.”

The project was proposed in 1958 to a brand-new NASA, and “60 years later, and it’s becoming a reality,” said project manager Andy Driesman, also of Johns Hopkins , which designed and built the spacecraft. The technology for surviving such a close solar encounter, while still being light enough for flight, wasn’t available until now.

Almost everything on the spacecraft will be behind this and thus in room-temperature shade while ducking through the jagged edges of the corona, without so much as a blister on its science instruments.

The spacecraft will hit 430,000 mph (690,000 kph) in the corona at closest approach. That’s equivalent to going from Washington, D.C., to Philadelphia in a split second. Or Chicago to Beijing in under a minute.

This is the first NASA spacecraft to be named after someone still alive.

Eugene Parker, 91, professor emeritus at the University of Chicago, predicted the existence of solar wind 60 years ago. He plans be at Cape Canaveral for the launch. United Launch Alliance’s Delta IV Heavy rocket is providing the muscle.

Parker got to inspect the spacecraft last fall. He said he’s “holding my breath that everything goes well.”

“This is a journey into never-never land, you might say, where it’s too hot for any sensible spacecraft to function,” Parker told Johns Hopkins’ Fox in a recent interview. “But some very clever engineering and construction have succeeded in making what looks like a very workable instrument.” 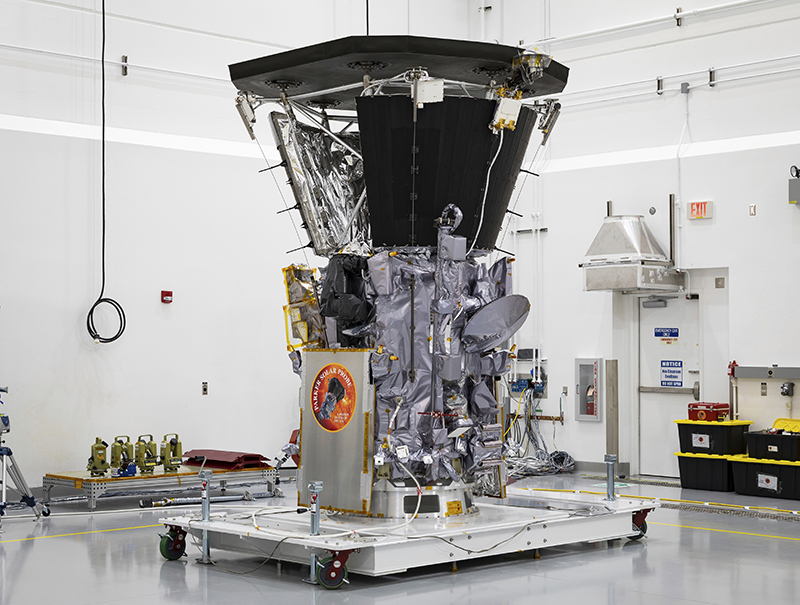 This July 6, 2018 photo made available by NASA shows the Parker Solar Probe in a clean room at Astrotech Space Operations in Titusville, Fla., after the installation of its heat shield. NASA’s Parker Solar Probe will be the first spacecraft to “touch” the sun, hurtling through the sizzling solar atmosphere and coming within just 3.8 million miles (6 million kilometers) of the surface. (Ed Whitman/Johns Hopkins APL/NASA via AP)

The spacecraft holds photos of Parker as well as a copy of his 1958 research paper on what he termed solar wind. Despite skepticism, NASA’s Mariner 2 spacecraft proved Parker right in 1962.

Also on board: more than 1 million names of space fans submitted to NASA this past spring.

It’s a fast-paced mission, with the first Venus encounter occurring less than two months after liftoff, in early October, and the first brush with the sun in November.

Fox puts it this way: If the sun and Earth were on opposite ends of a football field, Mercury would be at the sun’s 35-yard line, Helios 2 at the 29-yard line and the Parker probe at the 4-yard line.

NASA’s Messenger, which orbited Mercury from 2011 to 2015, provided insight into the solar wind but was too away.

“You know something exciting is just around the bend, but where you’re sitting you can’t see what that is,” Fox said. “So really the only way we can now do it is to do this daring mission to plunge into the corona.”

The Parker probe’s final three orbits — in 2024 and 2025 — will be the closest. The spacecraft eventually will run out of fuel and, no longer able to keep its heat shield pointed toward the sun, will burn and break apart — except perhaps for the rugged heat shield.