The Department of Mechanical Engineering at Toyohashi University of Technology has developed an unusual fire extinguisher that sucks flames and burning materials into a vacuum chamber. Once safely captured inside the chamber, the flames and materials are suffocated or extinguished.

Dubbed Vacuum Extinguish Method (VEM), the reverse concept extinguisher is geared toward special environments that are highly enclosed, such as space vehicles and different types of space transportation, and submarines.

If a fire starts in an enclosed environment, it can be extremely hard to contain it. Ultimately, VEM will help prevent and suppress the spread of harmful combustion materials like fumes, particulate matters, and toxic gas components within an enclosed space.

VEM’s reverse operation method is based on a suction system that pulls the flame or combustion materials into a vacuum chamber. From here, the flame goes out from either lack of air or extinguishing agents that could be revealed without contaminating the outside air.

Professor Yuji Nakamura, lead researcher, says, “The idea initially emerged through unreserved discussions with U.S. researchers. Though the test of the concept was simple to implement and confirm, however, systematic study to show its performance, such as formulating the performance based on a mathematical model, was arduous. With the assistance of ex-student, Mr. Usuki, and collaborator, Prof. Wakatsuki, the concept was confirmed and the complete test device was successfully developed.

“Controlled vacuuming was introduced by an ejector system and all devices were activated with sensors in the test to improve reproducibility substantially. Fascinating flame suction images show the result and provide rich images on how the process should be modeled. At present, space agencies are wary to introduce this concept because no such device was developed and tested by them. It is understandable that their decision-making is frequently based on safety so that older technologies, which are well distributed and reassuring, are approved. However, it does not mean that the new concept has no possibility of being considered. Emerging technological concepts frequently require constant proposal presentations to be recognized. We will continue to refine and present the concept.”

The VEM team hopes this technique will have a part in future space missions. They even expect it to fight metal powder fires or fight fires in clean rooms, where spraying fire-fighting agents can cause severe damage to operating rooms and equipment. 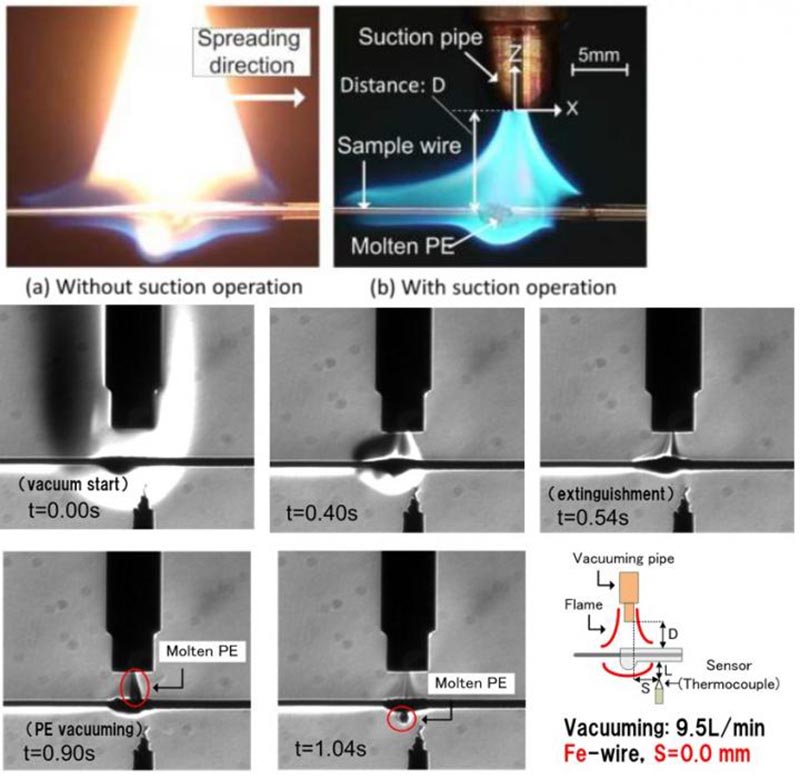 (a) Flame appearance with/without suction operation. (b) time-sequential Schlieren images during the suction extinguish process. With the suction operation, the flame’s color becomes blue, suggesting that the particulate matter generated by the flame (e.g. soot) is suppressed by the reduction of residence time and harmful product gas components as well as the burning source (molten polymer in this case) are effectively drained into suction box connected to the suction pipe (where extreme vacuum condition is maintained). Credit: Toyohashi University of Technology