Asteroids headed for a collision with the Earth, if found early enough, can be acted upon to prevent the potentially devastating consequences of an impact. One technique to divert an asteroid, called kinetic impact, uses a spacecraft to crash into the body at high speeds.

This approach delivers the momentum of the spacecraft, while also providing an additional boost of momentum through the production of impact crater ejecta exceeding the asteroid’s escape velocity. Researchers at Lawrence Livermore National Laboratory (LLNL) have been studying the effectiveness of the kinetic-impactor strategy by carrying out 3D simulations of the process.

In a new paper published in Icarus (link is external), LLNL planetary defense researchers find that asteroid deflection by kinetic impact is sensitive to a range of asteroid characteristics, including strength, porosity, rotation and shape. These and other asteroid properties may not be well constrained before an actual deflection mission is staged, leading to variability in the deflection outcome. By simulating a range of initial conditions for the target asteroids, researchers were able to quantify, for example, how greater target strength decreases the delivered momentum impulse and how, for an asteroid of constant size, added porosity can result in more effective deflections, despite the dampening of the shock waves produced during an impact.

In this model, asteroid Golevka (approximately 500 meters across) is impacted by a 10,000 kilogram mass traveling at 10 kilometers per second along a principal axis of the asteroid. Colors denote the accumulation of damage. The final change in asteroid velocity for this example is approximately 1 millimeter per second.

The kinetic-impact approach is one of the most mature technologies for deflecting a hazardous asteroid. For cases where the warning time is known well in advance and the asteroid is not too large, it is the preferred deflection mechanism, as described in a 2010 National Research Council report (link is external).

“Asteroids are naturally diverse, and researchers have little direct information about their mechanical properties,” said Megan Bruck Syal, lead author on the paper. “This study emphasizes the important role of asteroid characterization research, which is needed to constrain the different types of conditions that could be encountered at potential deflection targets.”

These results provide new information on the range of possible responses to a kinetic deflection attempt, which can directly inform the design of future kinetic-impact missions. The simulation results also are potentially useful for the interpretation of results from rare, full-scale impact tests, such as the Asteroid Impact and Deflection Assessment mission’s planned impact of the Didymos secondary in 2022. 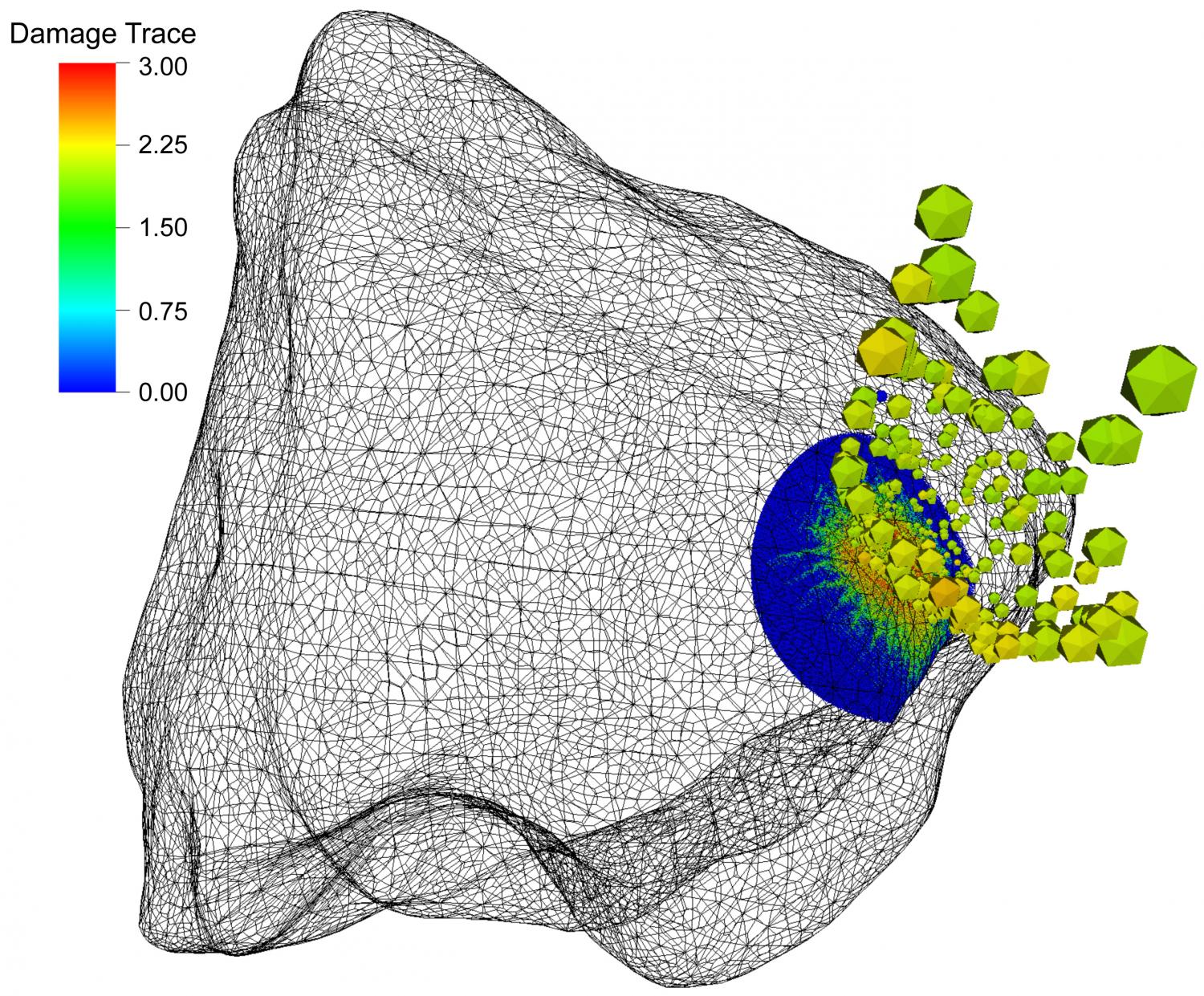 In this model, asteroid Golevka (approximately 500 meters across) is impacted by a 10,000 kilogram mass traveling at 10 kilometers per second along a principal axis of the asteroid. Colors denote the accumulation of damage. The final change in asteroid velocity for this example is approximately 1 millimeter per second.