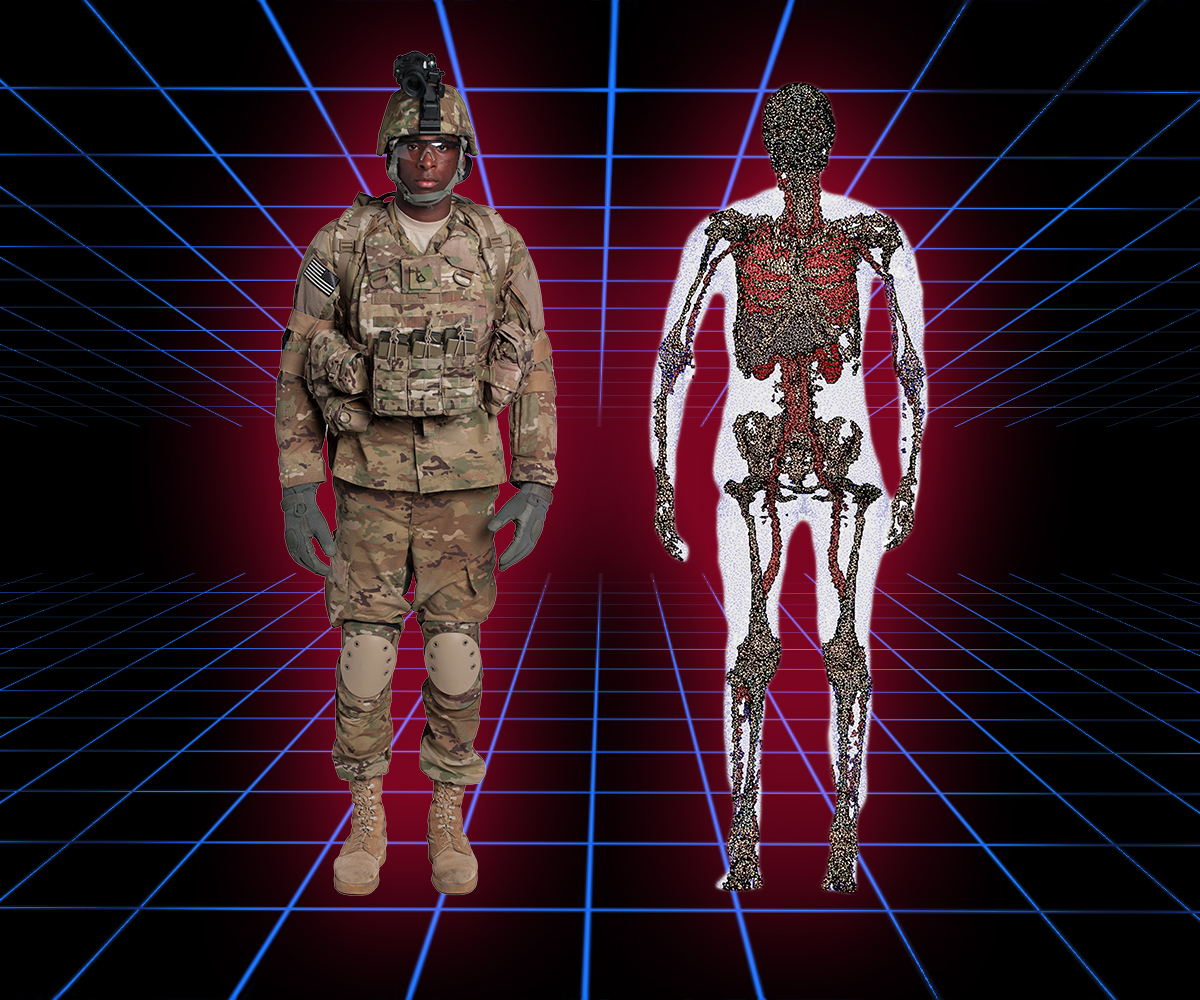 Photo Credit: Photo illustration Mallory Roussel, USARIEM Public Affairs Since 2010 researchers at the U.S. Army Research Institute of Environmental Medicine have taken on the mission to develop a computer program to create the full-body, complete-anatomy avatar of individual warfighters. Their goal is to create a 3-D fullanatomy avatar for any Soldier regardless of gender, shape or size.

Since 2010 researchers at the U.S. Army Research Institute of Environmental Medicine have taken on the mission to develop a computer program to create the full-body, complete-anatomy avatar of individual warfighters. Their goal is to create a 3-D full-anatomy avatar for any Soldier regardless of gender, shape or size.

Dr. Gary Zientara, a mathematical modeler, and Dr. Reed Hoyt, chief of the Biophysics and Biomedical Modeling division at USARIEM, designed this project to morph human internal anatomy to fit into a 3-D body scan of Soldiers. When Zientara and Hoyt looked at the range of research and activities occurring at Natick Soldier Systems Center, it was apparent to them that avatars could make an impact on the design of military gear, protective equipment and vehicles, and other applications across military medicine.

“This strategy has the possibility to create a large library of avatars, indeed, an online avatar ‘Army’ available for research use, and, as importantly, can provide individualized avatars representing uniquely specialized members of special units,” Zientara said. “Creating avatar models with this software enables individualized physiological modeling where an individual Soldier’s avatar can be clothed and moved through different postures and positions in order to be able to test angles of vulnerability and eventually even exercise and test physiological responses in any climatic environment.”

In 2015, as part of their first-generation avatar effort, Zientara and Hoyt formed a partnership with Natick Soldier Research, Development and Engineering Center’s Anthropometry Team, which provided 500 3-D body scans to USARIEM researchers. Currently, 250 male avatars have been successfully created as a means of testing, demonstrating and constantly improving the USARIEM computer program.

According to Zientara, the one key initial ingredient in the creation of the USARIEM avatars is the 3-D body surface scanning technology provided by NSRDEC. This technology can acquire a representation of the Soldier’s external surface.

“Human-like computer graphics figures shown in Hollywood movies or in online games are hollow, lacking internal anatomy,” Zientara said. “These movie or game avatars do not differ much from the body scan input used in our computation of full-anatomy avatars. Hollywood graphics figures or gaming avatars are simplified, compared to the full-anatomy USARIEM avatars, and are usually decorated to model superficial physical characteristics and clothing textiles. The simplicity of the Hollywood representation makes those cartoon avatars much easier to animate than the USARIEM avatars.”

Dr. Zientara explained that the software USARIEM uses analyzes the structure of the Soldier’s 3-D body scan to identify external appendages, surface anatomical landmarks, and a simple skeleton that the computer uses to understand body positioning. The software can then bend and size the standard anatomy figure into the posture representing the Soldier’s body scan, and finally expand or contract individual body components to best fit the Soldier’s scan.

“We consider our avatar products as ‘first generation’ due to the approximations made, but highly useful, nonetheless,” said Zientara. “The project takes advantage of computer technology now available on off-the-shelf, moderately priced commercial workstations. A great feature is that the computation is a black-box operation, that is, it does not require any expert input. Easy scanning and easy computing make our avatars a widely deployable tool for the Army.”

This technology could lessen the costs of physical testing and reduce the man-hours of the subject devoted to actual testing. Since simulation and testing software can be operated as desired, new applications can be tried, high-risk simulations can be easily and safely performed, and results can be compiled from as many avatars as one has available.

“These future applications, coupling avatars with other technologies, present the most sophisticated case of simulation tools to the 21st century Army,” Zientara said. “Advanced training tools developed from this technology and coupled with USARIEM avatars can significantly increase Soldiers’ knowledge and experience, concretely benefiting effectiveness, efficiency and safety.”