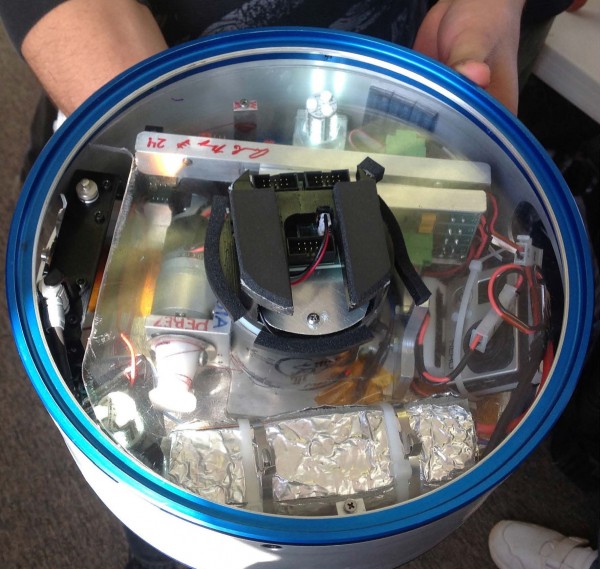 This payload developed by New Mexico State University engineers was recently launched on the UP Aerospace SpaceLoft rocket from Spaceport America. Credit: NASA

A research project led by New Mexico State University Professor Ou Ma that began in 2008 holds scientific, military and commercial promise for the growing use of satellites.

The innovative technology aims to support a growing need to develop satellite servicing capabilities that can extend the lifespan of existing satellites, support the assembly of large structures on orbit, and mitigate orbital debris. These advances can make spaceflight more efficient, sustainable and cost effective.

Ma, from the Mechanical and Aerospace Engineering Department, and his students have been developing an algorithm for identifying the inertia properties of a spacecraft while in orbit.

“The inertia properties, such as mass, location of mass center and moments of inertia, of a spacecraft can change in orbit due to fuel consumption, changes in position of hardware, payload deployments or payload capture. When this happens, the spacecraft’s control system needs to know the changes to maintain proper control of the spacecraft,” said Ma, who is the first recipient of the John Kaichiro Nakayama and Tome Miyaguchi Nakayama Professorship for Research Excellence.

Ma’s Inertial Property Algorithm Verification (IPAV) Project identifies the inertia properties of a spacecraft based on the impulse-momentum principal by incorporating the novel use of an onboard robotic arm. A large advantage of using a robotic arm to identify inertia, over existing methods, is that it is powered by renewable solar, reducing the use of critical fuel consumption by the satellite.

But testing and validation requires the system to float freely and rotate arbitrarily in a 3D-space without gravity. Several other different methods for spacecraft inertia identification have been proposed, but none has as of yet been tested in a real microgravity environment.

“Our approach is to reach this goal incrementally,” said Ma. The group has twice tested the system in an aircraft parabolic flight that provided 10-20 seconds of microgravity time.

The algorithm has also been tested twice in suborbital flight, providing 150-200 seconds of microgravity time, most recently as a payload on the launch of the UP Aerospace SpaceLoft rocket from Spaceport America in November.

“Unlike all other suborbital flight payloads, which were always fixed to the launch vehicle, our payload has a flying unit which was ejected into free space, unattached to anything, and freely floated inside the payload compartment of the launch vehicle,” said Ma. “It finally was captured and secured to the base again. Therefore, we call this unit flight-in-flight because it flies within a flight vehicle.”

Because of the challenge with flight-in-flight capability, the team planned to achieve the flight goal with two separate lunches. The first launch was to test and verify the basic techniques designed for achieving the flight-in-flight capability. It was launched in 2013 and the payload worked but not to full expectations, for example, video data was not recorded because the battery ran out of power due to launch delay.

During the second suborbital flight, the team added a two-joint robotics arm to the unit for testing, making it a more complicated experiment. The robotic arm successfully secured a compartment holding a free-floating sensor to collect data for the algorithm that determines inertia properties.

Telemetry data, such as velocity, acceleration, pressure and temperature, were measured during flight. The experiment successfully secured the device during ascension, released it during microgravity conditions, fetched the free-floating unit with a tether before microgravity ended and secured the unit for landing.

“Our preliminary analysis of the telemetry data and the onboard video data indicated that all the functions of the payload worked perfectly as expected, and therefore, it was a very successful flight,” said Ma. “I am so happy that it worked perfectly without any problems.”

The project has provided high-level hands-on experience for students over the years. Almost all of the participating students have been hired by major aerospace entities, such as NASA, Air Force Research Laboratory, Sandia National Laboratories and Lockheed Martin.

The research idea came from Ma’s regular research work in the areas of space robotics and spacecraft dynamics and control. He had a strong desire for experimental verification of his research results and thus, was looking for opportunities to do flight tests. Further impetus came from the enthusiasm and hard work of students who wanted to design, build and fly payloads, especially the student leaders Jeremy Bruggemann, now working for NASA at White Sands Test Facility, and Gerardo Martinez, now working for Sandia National Laboratories.

Further support in the form of student grants and scholarships, as well as encouragement, came from the New Mexico Space Grant Consortium, led by Pat Hynes and funded by NASA, along with the NASA Flight Opportunities Program.

“If any one of these were missing, we would have no such exciting flight project,” said Ma. Ma is now seeking an opportunity for the next step: testing on a real orbital flight, namely the International Space Station, which can extend microgravity time needed for full validation.

Long term, the technology may have use in advanced unmanned aerial vehicle and drone robotic-arm capability for commercial applications such as emergency response handling, urgent robotic services in remote areas or places that present dangers, and the possible delivery of commercial goods.