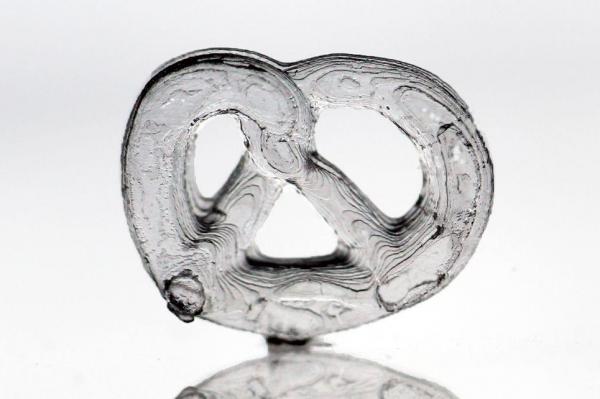 Researchers at the Karlsruhe Institute of Technology, in Germany, have developed a method for 3D-printing with glass.

The 3D printer is supplied with a novel mixture of high-purity quartz glass nanoparticles and a small amount of liquid polymer, which works as a binding agent. Scientists use stereolithography to cure the printed product with light, before washing out any remaining liquid in a solution bath. Any polymer that remains trapped in the glass is melted away during a final heating stage.

“The shape initially resembles that of a pound cake; it is still unstable, and therefore the glass is sintered in a final step, i.e. heated so that the glass particles are fused,” Bastian E. Rapp, a mechanical engineer at KIT, said in a news release.

Previous attempts to 3D-print with melted glass yielded porous structures with a rough surface. The new method avoids such problems. Scientists were able to construct a variety of complex structures using the new 3D-printing technique.

“[The] technology could be used, for instance, to make small, complex structures out of a large number of very small optical components of different orientations,” Rapp explained.

Researchers believe the method could be used to produce special lenses for a variety of optical applications.

Rapp and his colleagues detailed their success in the journal Nature.