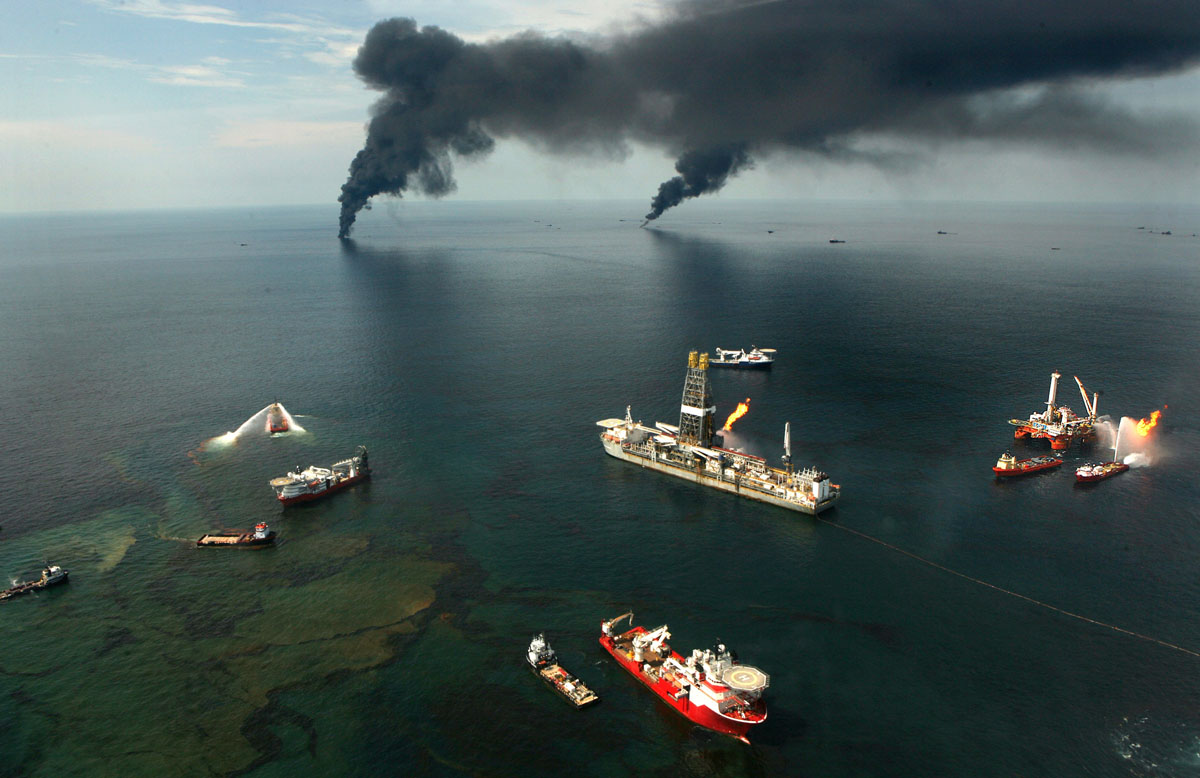 When the Deepwater Horizon oil rig suffered a catastrophic explosion and blowout on April 21, 2010, leading to the worst oil spill in the history of the petroleum industry, the well’s operators thought they would be able to block the leak within a few weeks. On May 9 they succeeded in lowering a 125-ton containment dome over the broken wellhead. If that measure had worked, it would have funneled the leaking oil into a pipe that carried it to a tanker ship above, thus preventing the ongoing leakage that made the spill so devastating. Why didn’t the containment work as expected?

The culprit was an icy mixture of frozen water and methane, called a methane clathrate. Because of the low temperatures and high pressure near the seafloor, the slushy mix built up inside the containment dome and blocked the outlet pipe, preventing it from redirecting the flow. If it hadn’t been for that methane clathrate, the containment might have worked, and four months of unabated leakage and widespread ecological devastation might have been prevented.

Now, a team of researchers at MIT has come up with a solution that might prevent such a disastrous outcome the next time such a leak occurs. It may also prevent blockages inside oil and gas pipelines that can lead to expensive shutdowns to clear a pipe, or worse, to pipeline rupture from a buildup of pressure.

The new method of preventing the icy buildup is described in a paper in the journal ACS Applied Materials and Interfaces, in a paper by associate professor of mechanical engineering Kripa Varanasi, postdoc Arindam Das, and recent graduates Taylor Farnham SB ’14 SM ’16 and Srinivas Bengaluru Subramanyam PhD ’16.

The key to the new system is coating the inside of the pipe with a layer of a material that promotes spreading of a water-barrier layer along the pipe’s inner surface. This barrier layer, the team found, can effectively prevent the adhesion of any ice particles or water droplets to the wall and thus thwart the buildup of clathrates that could slow or block the flow.

Unlike previous methods, such as heating of the pipe walls, depressurization, or using chemical additives, which can be expensive and potentially polluting, the new method is completely passive — that is, once in place it requires no further addition of energy or material. The coated surface attracts liquid hydrocarbons that are already present in the flowing petroleum, creating a thin surface layer that naturally repels water. This prevents the ices from ever attaching to the wall in the first place.

Existing prevention measures, known as flow assurance measures, “are expensive or environmentally unfriendly,” says Varanasi, and currently the use of those measures “runs into the hundreds of millions of dollars” every year. Without those measures, hydrates can build up so that they reduce the flow rate, which can reduce revenues, and if they create blockages then that “can lead to catastrophic failure,” Varanasi says. “It’s a major problem for the industry, for both safety and reliability.”

The problem could become even greater, says Das, the paper’s lead author, because methane hydrates themselves, which are abundant in many locations such as continental shelves, are seen as a huge new potential fuel source, if methods can be devised to extract them. “The reserves themselves substantially overshadow all known reserves [of oil and natural gas] on land and in deep water,” he says.

But such deposits would be even more vulnerable to freezing and plug formation than existing oil and gas wells. Preventing these icy buildups depends critically on stopping the very first particles of clathrate from adhering to the pipe: “Once they attach, they attract other particles” of clathrate, and the buildup takes off rapidly, says Farnham. “We wanted to see how we could minimize the initial adhesion on the pipe walls.”

The approach is similar to that being used in a company Varanasi established to commercialize earlier work from his lab, which creates coatings for containers that prevent the contents — anything from ketchup or honey to paint and agrochemicals — from sticking to the container walls. That system involves two steps: first creating a textured coating on the container walls, and then adding a lubricant that gets trapped by the texture and prevents contents from adhering.

The new pipeline system is similar to that, Varanasi explains, but in this case “we are using the liquid that’s in the environment itself,” rather than applying a lubricant to the surface. The key characteristic in clathrate formation is the presence of water, he says, so as long as the water can be kept away from the pipe wall, clathrate buildup can be stopped. And the liquid hydrocarbons present in the petroleum, as long as they cling to the wall thanks to a chemical affinity of the surface coating, can effectively keep that water away.

“If the oil [in the pipeline] is made to spread more readily on the surface, then it forms a barrier film between the water and the wall,” Varanasi says. In lab tests, which used a proxy chemical for the methane because the actual methane clathrates form under high-pressure conditions that are hard to reproduce in the lab, the system performed very effectively, the team says. “We didn’t see any hydrates adhering to the substrates,” Varanasi says.