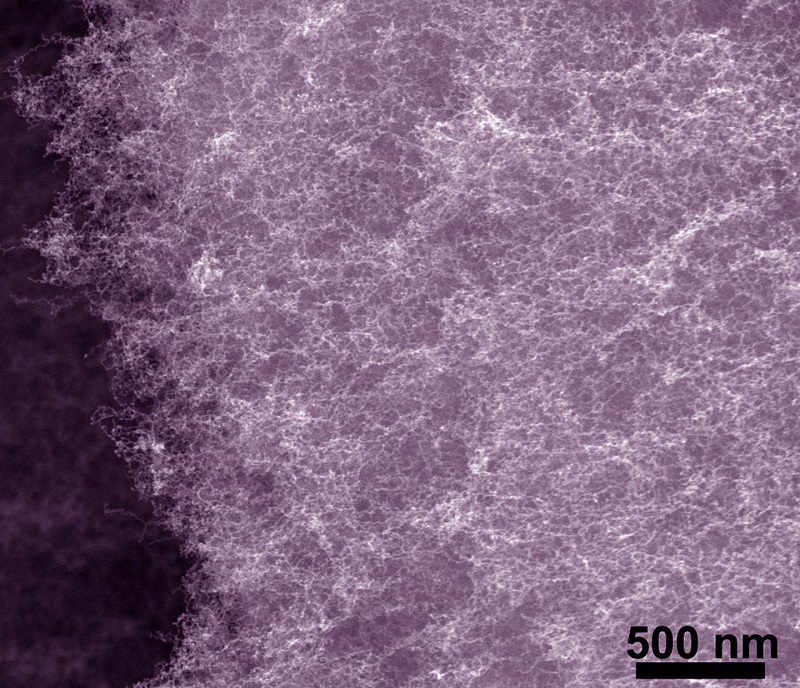 Washington State University researchers have developed a novel nanomaterial that could improve the performance and lower the costs of fuel cells by using fewer precious metals like platinum or palladium.

Led by Yuehe Lin, professor in the School of Mechanical and Materials Engineering, the researchers used inexpensive metal to make a super low density material, called an aerogel, to reduce the amount of precious metals required for fuel cell reactions. They also sped up the time to make the aerogels, which makes them more viable for large-scale production.

Their work is published in Advanced Materials.

Hydrogen fuel cells are a promising green energy solution, producing electricity much more efficiently and cleanly than combustion engines. But they need expensive precious metals to fuel their chemical reactions. This need has limited their acceptance in the marketplace.

Aerogels, which are sometimes also called liquid smoke, are solid materials that are about 92 percent air. Effective insulators, they are used in wet suits, firefighting gear, windows, paints and in fuel cell catalysts. Because metal-based aerogels have large surface areas and are highly porous, they work well for catalyzing in fuel cells.

Researchers introduced the copper in the bimetallic system through their new, one-step reduction method to create hydrogel. The hydrogel is the liquid-filled form of aerogel. The liquid component is carefully and completely dried out of the hydrogel to create aerogel. Their method has reduced the manufacturing time of hydrogel from three days to six hours.

“This will be a great advantage for large scale production,” said Chengzhou Zhu, a WSU assistant research professor who created the aerogel.

The research is in keeping with WSU’s Grand Challenges, a suite of research initiatives aimed at large societal issues. It is particularly relevant to the challenge of sustainable resources and its theme of energy.